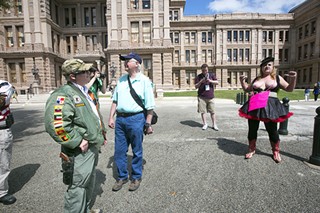 On Friday, March 11, Open Carry Texas, led by C.J. Grisham, kicked off their "SXSW Open Carry/Gun Awareness Education" rally at the south side of the Capitol and marched through Downtown to the Austin Convention Center.

Of course, as expected, the media far outnumbered the gun activists, with only a handful participating throughout the almost two-hour-long event. Grisham, who recently retired from the military, said early on that he only expected about 10 people, but that he prefers small groups because he wants to be able to talk to people and not look "like a parade." When asked about the publicity stunt, Grisham replied, "Name an activist organization that doesn't want attention." With a black powder cap-and-ball pistol on his hip, Grisham explained that he wants the same gun laws as we had in 1791 when the Second Amendment passed – none at all.

Shortly after noon, a woman, who chose not to be identified for safety reasons, arrived on the scene wearing signs with slogans like "More Boobs, Fewer Guns" and "Boobs for Peace." She explained, "I took off work for this. I'm not gonna let these guys represent us." She said Austin is about peace and love and hippies, not guns. Chanting almost nonstop for the entirety of the event, the woman shouted things like "My tits are political," and "I'd rather have my 56-year-old boobs flopping around than have guns in my town."

Grisham said his group has open-carried at the past two SXSW events as well, and the fact that Obama was attending this one was coincidental. They marched to the convention center instead of the Long Center where Obama was speaking, Grisham said, because they wanted to stay as far away from Obama as possible, because of recent situations like Oregon, where a citizen was killed. This comment sparked a debate with a local resident, who had stopped by to see what was going on. The onlooker said that people like Grisham are making "martyrs" out of the Oregon gun nuts and "fermenting anger."

As the event went on, tensions rose between Grisham and the topless woman. As he was trying to talk to the media, the woman chanted "more boobs, less guns," jiggled her breasts, mooned the open carry activists, and traded insults with Grisham. And this was all before the group left the Capitol. In the background of the heated debate, schoolchildren on a field trip got a little more of an education than their school likely intended.

As the group began their march, they encountered a group of Christian activists carrying megaphones and a life-sized cross, and wearing shirts that read "Judgment Coming." As the open carry activists marched by, the group was preaching about sin, prompting the topless woman to yell, "Jesus likes boobs better than guns!" A woman wearing a "Jesus Loves You" shirt responded, "Jesus will cover your nakedness with his blood!"

The march continued through Downtown, the small handful of gun activists surrounded by a mob of reporters, followed by the topless woman chanting. Most bystanders seemed amused by the scene, taking pictures and laughing. One man laughed and asked, "Is this real?!" When someone got a picture of him with the topless woman, he added, "Man, my wife's gonna kill me!" Of the few who were offended, more seemed to be offended by the breasts than by the guns. One woman responded simply by saying, "I don't have a penis and I love guns," but others weren't so calm. One woman said there were kids around and the woman should put a shirt on; she yelled at her to "Get your ass on!"

Gun activist and Katy resident Candy Martin, a former police officer in Georgia, emphasized that women need protection, and that mace or a knife won't cut it. She said, "We pander too much to the weak-minded." Saying that "some people are so phobic about guns," Martin noted that you can also kill people with a car, a shovel, or even "a shoe for Pete's sake." She added, "If you don't want [a gun], don't buy one."

While their disagreements were clear, the debate between Jin and Grisham (which focused more on campus carry than open carry) was much more civil than the earlier interactions. Martin said she'd love to have a beer with Jin sometime, and Grisham later described on the Open Carry Texas Facebook page "the honor of meeting" Jin, whom he described as "a wonderful young lady ... for a liberal."

While Jin and Grisham had a calm discussion, the topless woman was still chanting about more boobs and fewer guns in the street. When asked how long she planned on staying, she replied, "As long as these guys are gonna show off their guns, I'm gonna show off my boobs." And she did, until the group dispersed around 2pm. 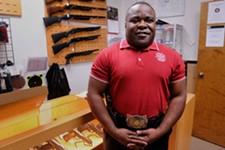 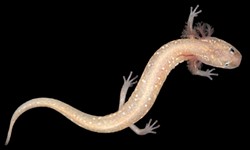