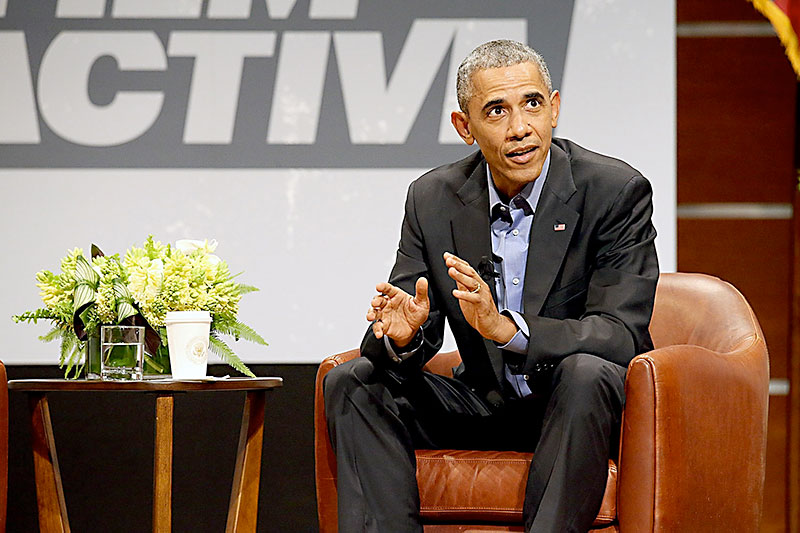 President Obama stopped by Austin Friday, March 11, to visit Torchy's Tacos, speak at SXSW Interactive, and headline a DNC fundraiser. Among the issues discussed by Obama during his SXSWi interview with the Texas Tribune's Evan Smith were the role of government, voter turnout, and balancing security concerns with the right to privacy. (Photo by Gary Miller)

Council Spring Break: City Council is on break this Thursday but will return March 24 to tackle a delayed resolution seeking to reform the city's gender discrimination policies, the Public Safety Commission's recommendations on fire response times, and a proposal to amend the process for public comment at council and committee meetings. CMs will also take up about 20 zoning and neighborhood plan amendments, plus a resolution to use dedicated parkland for permanent reclaimed water transmission and distribution.

Capital Metro's Advisory Board will make its final vote, Tuesday, March 21, to approve the Plaza Saltillo Master Development Agreement. The MDA has received pushback from labor advocates, who object to the inclusion of developer Robert Shaw, who they say has allowed wage theft to occur at other sites of his (see "Working Overtime, but Not Getting Paid for It," Nov. 27). Advocates, led by Workers Defense Project, are also hoping to persuade the board to revise the MDA to include requirements such as a living wage and safety training.

Olympian fencer Ibtihaj Muhammad, the first Muslim woman to represent the U.S. in the sport on an international stage, was asked to remove her hijab by a SXSW Interactive volunteer on Sat., March 12. Muhammad took to Twitter to call out the Fest, which apologized.

Election Is On: An Uber-supported lawsuit challenging the ballot language for the May 7 special election on regulations for transportation network companies was rejected Monday by the Texas Supreme Court. See "Texas Supremes Deny Uber," March 14.

Lyft has "permanently removed" Austin driver Allen Edmonds after he was arrested for drunk driving with a passenger in his vehicle. Since it appears Edmonds has a history of such behavior, the incident has raised questions about Lyft's background-check process.

UT women's basketball earned a No. 2 seed in this month's NCAA's, and will play Alabama State on Saturday, March 19, at the Erwin Center. The Longhorn men, seeded sixth in the West, head to Oklahoma City Friday to play Northern Iowa. See "Hornography."