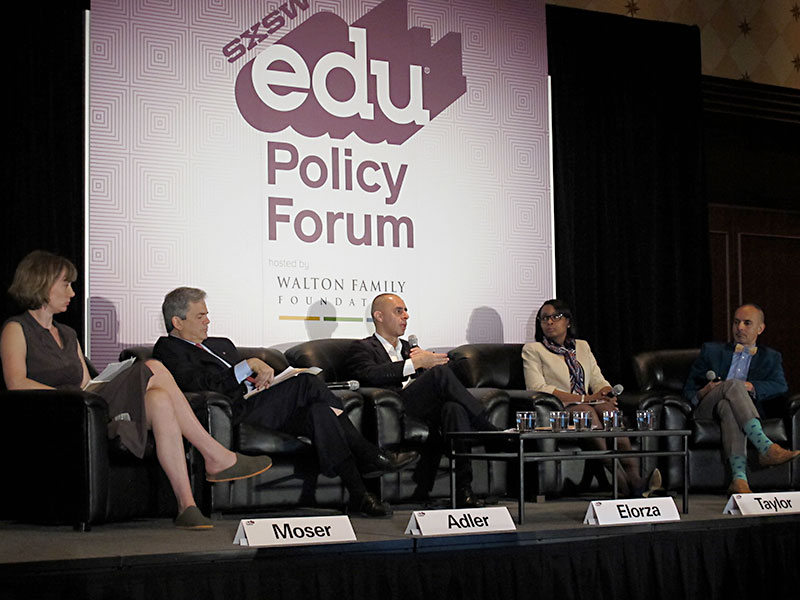 As South by Southwest geared up last Thursday, March 10, its sibling SXSWedu wound down. In the final hours, mayors of cities around the nation, including Austin's own Steve Adler, gathered to discuss the role that city government can play in the education process.

Along with San Antonio's Ivy Taylor, Jorge Elorza of Providence, R.I., and Christopher Cabaldon of West Sacramento, Calif., Adler was part of a policy-centric town hall on what those cities are doing to help education. The inevitable first hurdle most mayors face is that they don't run the schools. Of the four, only Elorza has direct control over campuses, as the Prov­i­dence Public School District falls under city jurisdiction. That's far removed from San Antonio, where not only does Taylor not have a formal role in school management, but she actually has to negotiate with 15 different independent school districts. However, Elorza noted that all mayors can still get involved, because, he said, "There's a difference between a school system and an education system."

Elorza's argument was simple: You can have the best schools imaginable, but if you don't provide out-of-school educational opportunities and stable communities for all kids, "at the end of the day, you have a very wide achievement gap."

This being Austin, the subject turned to gentrification, and cities' use of planning, permitting, and affordable housing funds. Taylor argued for finding ways to get underpaid teachers living in their community, so they are better connected to their students and their families, and more reflective of that community. In Austin, the more pressing problem is reversing the current outflow of working families to cheaper surrounding dormitory communities. As Adler put it, "We're exporting our poverty."

Part of the solution may involve creating broader economic opportunities, as part of a greater ecosystem in which schools can flourish. For example, Cabaldon cited a teacher who worked to connect all her students with paid internships. While he praised her efforts, he said, "That's not scalable. We can't expect teachers to put that together." Instead, his administration incentivized city contractors to provide paid internships, making it easier for those students to find them. "We create the scale of internships," he said.

At the other end of the education timeline, Cabaldon noted that West Sacramento encourages day care providers to upgrade to full pre-K facilities. Similarly, Taylor's predecessor, current Housing and Urban Devel­opment Secretary Julián Castro, implemented a policy to provide universal, citywide, full-day pre-K. All it took was the will, some innovation, and smart financing. Under Texas state law, his office couldn't just give school districts the money to pay for pre-K. But San Antonio's sales tax rate was one-eighth of a cent below the tax cap: The city raised the rate to the cap, and used that new revenue to pay for the popular and successful program directly.

In Austin, one solution has been cost- and facility-sharing, such as placing elementary schools next to public parks. Moreover, while Adler may not have San Antonio's sales tax wiggle room, there's still some space for financial ingenuity. For example, under Texas' Robin Hood school finance recapture system, Austin ISD sends $200 million in local property taxes to the state, and that will rise to $400 million in short order. Adler said, "If the school district taxes a penny, some of it goes to the state. If the city taxes a penny, then all of it stays here."

As with San Antonio, Austin can't just hand the district a check, but there are wraparound programs such as health services, social services, and homelessness prevention that can be administered by either an ISD or city hall. To this end, the city and AISD are considering a tax swap: The district will drop its rate, the city will raise it by the same amount, and because the state isn't taking their slice, the same dollars go a lot further. Adler said the proposal is being run past lawyers, to make sure it's watertight against legal challenges from the state. "We fight this guerrilla war all the time," he said, "but I think this holds promise."

There's one further area that all four agreed municipal authorities can influence: disrupting the school-to-prison pipeline. Cabaldon posited that cities have a role in helping kids in peril of falling into the juvenile justice system. He advocated for tracking expelled kids, and intervening before they end up in court. Moreover, he argued for reducing the number of expulsions. The math is simple: If a kid gets expelled for a disciplinary reason, they are more likely to end up in jail. Elorza went even simpler: "I told my teachers to expel less children."