If it's family detention centers, it depends on who's asking 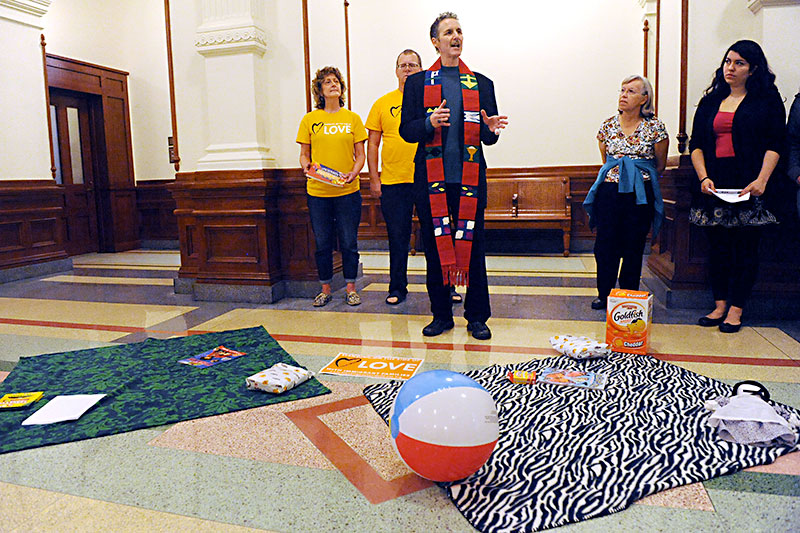 For more than a year now, immigration rights and child welfare advocates, human rights activists, and attorneys have called on the government to end the practice of holding immigrant women and their children in family detention centers, charging that they're "baby jails" that need to be closed.

"Child-care facilities exist to take care of children," wrote Virginia Raymond, an Austin-based immigration attorney who vocally opposes the move. The state of Texas, which requires most child care centers to be licensed, also mandates through DFPS the specific minimal standards those centers must meet. Because family detention centers cannot meet those standards, these critical requirements are waived for the sole purpose of licensing these centers, so they can legally remain open.

The adopted rule (Rule 40) to license family detention centers, which became effective March 1, exempts the two facilities in Dilley and Karnes City from three of the minimum residential standards: 1) the limitation of four occupants to a room; 2) the limitation on a child sharing a bedroom with an adult; and 3) the limitations on children of different genders sharing rooms.

Almost every sleeping cell at Karnes and Dilley holds two or more families. Accord­ingly, at least two mothers and children, often of different genders, are living, sleeping, and dressing in the same space. "The standards that generally prevent such arrangements are in place to prevent harm to children, including sexual abuse, exposure to discipline by an unrelated adult who is not a caregiver, and inappropriate nudity among unrelated children and adults," wrote Texas RioGrande Legal Aid attorneys Jerome Wesevich and Robert Doggett. In fact, sexual abuse among residents has been reported at the Karnes facility, yet has gone uninvestigated by DFPS, according to Laura Guerra-Cardus, associate director at the Children's Defense Fund of Texas.

DFPS argued that the licensure would protect the health and safety of children, as they found "an imminent peril to the public's health, safety, or welfare." However, the decision to license family detention centers is in fact the state's preferred approach to comply with a court order of last summer. In July, Judge Dolly M. Gee of the Federal District Court for the Central District of California issued an order declaring that practice of family detention violates the Flores settlement, which mandates that children should not be detained unless they pose a security risk. In cases where detention is unavoidable, children should be housed in child welfare-licensed facilities. She gave the government 90 days to comply with the order.

Searching for a quick fix to comply with Judge Gee's order, DFPS issued a special "emergency" rule last September to ease some of the regulatory requirements for licensed child care services. Grassroots Leadership filed a lawsuit against DFPS, challenging its institution of the emergency rule without a full public-review process. As a result, a temporary injunction was issued in November halting adoption of the emergency rule until a trial on the merits can be held in May 2016.

However, "since the state is committed to rescue detention centers and the Obama administration policy on immigration and family detention centers, Texas was able to push Rule 40 through the regular rule-making procedure despite the outcry of community members who testified against the rule and detention centers," said Cris­tina Parker, Grassroots Leadership's immigration programs director.

Last December, DFPS held a public hearing to obtain public input on Rule 40. Different community members who have been involved with family detention centers expressed their strong concerns about licensing them.

"Six days a week, I walk into this facility [Dilley] and I meet with over 150 mothers who with them are their children who all are sick. They are crying. They have fevers. ... They are bloated. They have diarrhea. ... That is what we see every single day. And it is a sign of both the inadequacy of the child care that is provided and also the inhuman standards in which these children are put," testified Ian Philabaum, the underground project coordinator for the CARA pro bono project at Dilley.

Launched in 2014, the Karnes and Dilley family detention centers are run by for-profit companies: the GEO Group and Corrections Corporation of America, respectively. Guards working in the facilities have no expertise in child welfare. In fact, many of them have work experience in men's prisons, explained Guerra-Cardus.

Reports reveal that children are suffering. "They are experiencing weight loss, hair loss, regression to infantile state behaviors, widespread anxiety, and suicidal ideation," said Guerra-Cardus. "Whether it is a broken bone or pneumonia, women and children are given Tylenol and asked to drink water," she added.

An open records request made by Grassroots Leadership revealed that DFPS received more than 5,000 pages worth of comments, letters, emails, and testimony that argued strongly against adopting Rule 40.

By putting a seal of approval on detention centers as child care facilities, Texas helps extend their existence. Yet, any locked-up facility cannot be a safe place to raise a child, said Guerra-Cardus. "When children are contemplating suicide, you know something is seriously wrong."