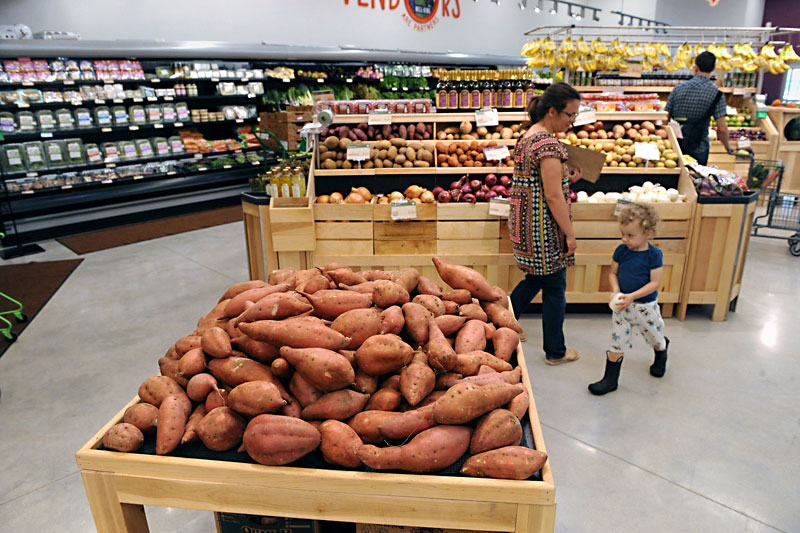 Austin as a whole has plenty of grocery stores, such as Wheatsville Co-op, but not every part of town has easily accessible healthy food. (Photo by John Anderson)

If Austin were to achieve perfection, what would it look like? Cheap housing, a store on every block just across the street from a club, and a cop on every corner with spare time to shoot the breeze. After months of interminable meetings driven by the double distraction of transportation network companies and short-term rentals, Council met on March 3 to ponder the future – or rather, to tell staff to start some pondering for them.

Plans for future food policy came in Item 20, directing City Manager Marc Ott to start developing policy recommendations on food access, and to make it part of the remit of the new Equity Office. Food deserts – areas where there is either no easy access to food, or no easy access to healthy food – have become a growing issue in Austin. But this pregame stage of the debate became bogged down in procedural semantics, as Council Member Sheri Gallo said she was concerned that, by including food access before the rest of the office's mission was defined, "It is kind of the cart before the horse." She wanted to instruct Ott to merely consider its inclusion, a proposal immediately rejected by sponsor CM Delia Garza, who said the issue was too important to be left in limbo. CM Ellen Troxclair, who abstained from the "consider" vote, voiced concern about language encouraging eligible residents to enroll in programs like SNAP, rather than decreasing need. She admitted that her suggestion was "idealistic [but] I wish we could frame that in a different way." However, her concerns were not sufficient to put her off voting for the resolution, which passed 10-1.

CM Don Zimmerman was, unsurprisingly, the sole holdout, calling the resolution "ridiculous" and "another tool in economic segregation." He was equally dismissive of plans to develop a community policing policy, as proposed in Item 13's plan to contract with Matrix Consulting Group as a community policing consultant. Austin Police Chief Art Acevedo referred to community policing as "a mindset and a culture" that has to go beyond district representatives, and that will require a root-and-branch restructuring of the department. Cue the inevitable question – this time from CM Greg Casar – about whether giving staff more uncommitted time for community engagement will mean hiring more officers. Meanwhile Zimmerman (as per usual) pooh-poohed the hiring of a consultant to survey community expectations, as every member heard plenty during the elections. "You want to make people happy in our community? Start solving property crimes. ... Go out there at two o'clock in the morning and shut down a noisy party. People would fall in love with the police department."

Speaking of loud music: In Item 19, Council approved a resolution directing Ott to conduct a comprehensive review of Austin's "music and creative ecosystem." It sounds like an artistic endeavor, but it's really another blast in the city's battle for – or, depending on your viewpoint, against – affordability. Mayor Steve Adler put it bluntly: "We don't stay the live music capital of the world for very long if we lose our musicians." The impetus for the initiative was the recent Austin Music Impact study by TXP Inc. for nonprofit Austin Music People (thus explaining its emphasis on music over all other creative industries). The study's core conclusion was that the city lost 1,200 music industry-related jobs between 2010 and 2014 (a major coda: Take into account music tourism for events like ACL and SXSW, and the number of jobs actually rose by 2,575). A bleak number indeed, but there was no discussion of how this compares to the music industry as a whole, which has been in freefall for years, or to other music-heavy cities like Nashville.

The resolution sends a list of potential measures for Ott to put through a feasibility study and report back in 90 days. That wish list included yet another proposal to streamline the venue permitting process, and smaller innovations like adding a "tip the singer" slot on credit card receipts. How­ever, what's definitely off the table is any form of incentives, with both Adler and Troxclair doubting their efficacy. Yet club owners have made it clear to the Chronicle that they believe that, without incentives, this is all just well-meaning hot air (see "Playback," March 4).

As with seemingly all discussions about Austin, this one looped back to housing affordability: specifically, how the city can stay affordable for musicians. CM Ann Kitchen – who the next day would learn she had dodged the bullet of a recall election (see p.24) – took a preservationist approach. She suggested that the best way to provide affordable housing is to protect the existing affordable housing stock, and similarly proposed protecting existing rehearsal and artistic spaces. Inevitably, the discussion's rhetoric also blurred into the discussion of the planned Pilot Knob development: the subtext being that it will provide the kind of affordable housing that will retain artists. However, building those units south of Berg­strom Airport may only reinforce the notion that they are being pushed out of the city core. It also remains to be seen if council will back away from the 2014 decision to limit the maximum number of unrelated people sharing a neighborhood residence to four. As house sharing has long been an effective way for artists to cut living costs, that issue may come back as part of the ongoing CodeNEXT initiative.

Speaking of affordability and music, in other actions, Council:

• approved a revision to the already-passed Pilot Knob PUD ordinance, clarifying the mechanism whereby the city can pay for the development's affordable housing component without tying the hands of future councils.

• rescheduled public hearings for the Aus­tin Energy rate case. Normally, these discussions are long and painful, with months of feedback, but since this will probably be a residential rate decrease, the expectation is that there will be less need for public input before a final decision is made by Sept. 29.

• Speaking to Kitchen's proposal to preserve existing creative spaces, Council rejected an application to rezone 3.6 acres on Thornton Road – currently home to an assortment of artistic endeavors at Thornton Road Studios – and redevelop it as mixed use.

Council now heads into spring break, and will return post-SXSW for a March 22 work session and March 24 meeting.