Sponsored by District 1 CM Ora Houston, the item elicited objection from the Housing Authority of the City of Austin (which owns the property) and some Eastside residents, who argue the designation would result in the complex serving fewer families than it could otherwise.

"I believe the residents there deserve better living, better housing, they deserve to come home and be happy. Some want to keep Rosewood for the memories, but we have people actually living there who need it to change for health issues," Dana Hill, a former tenant of Rosewood Courts of five years, testified before Council. Listing off the aging buildings' problems – including no A/C or central heat, outdated plumbing, gas and electrical issues, narrow stairwells, and a lack of basic modern amenities – Hill and other former and present residents requested Council back away from historic zoning, as it would inhibit HACA's $60 million plan to redevelop the complex, opened in 1939.

On the other end, Fred McGhee, a former City Council candidate who has led the effort to grant Rosewood historic zoning, advocated again for the classification and spoke about the historical significance of the site, while refraining from commenting on the HACA plan. Leading the Council charge, Houston said it was easier to prevent Rosewood from getting the designation – compared to the Latino and Hispanic-populated Santa Rita Courts (on the National Register of Historic Places since 2008) – because there are "so few" African-Ameri­cans in the city. She emphasized the importance of preserving the brick and mortar: "We want people who come to the city long after I'm dead and gone to know that on that property, negroes lived – and not only they lived there, they thrived."

Sylvia Blanco, executive vice president of HACA, told Council the agency is committed to historic zoning for six buildings (a quarter of the site), but not for the entire property – that, she said, would be an "overreach," and unjustified. If historic zoning did go through, Blanco said, HACA would be restricted in its ability to modify the building, and would in turn lose up to one-third of its affordable housing units, which would push many of the low-income families residing there out.

The redevelopment plan, on the other hand, would keep six buildings, transform the existing 124 units, add 76 units, and create a dedicated Emancipation Park. It also promises right-to-return for existing residents, who will be given priority to live in the new buildings. "Remember," said Blanco, "Rose­wood Courts is not a museum, it is a home to 124 families, and our families deserve better. Please don't tie our hands to prevent efforts to meaningfully improve our residents' lives."

Council found it was a delicate balance to strike: paying respect to the historical and cultural value of the structure in a rapidly gentrifying area while also ensuring the actual working-class residents who depend on the structure live in quality conditions amid affordable-housing shortages. While they've cast their first vote, nothing's set in stone just yet. Initiating historic zoning via Council is "very unusual," commented Jerry Rust­hoven, of the city's Planning and Zoning Department. Now, the unusual proposal heads to the Historic Landmark Commis­sion (in August, the Commission declined to initiate historic zoning) then the Planning Com­mis­sion, and will eventually loop back around to Council. 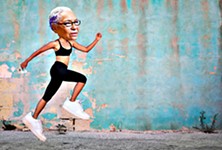