Public Notice: Too Tired to Be Grumpy

This election week, and the upcoming SXSW, have left me too distracted to be properly indignant about whatever heinous activities our elected officials may be up to. And anyway, as I noted last week, City Coun­cil cleared its decks of a number of long-running issues over the last several meetings, and while some new initiatives are in the works – see "Playback" for a look at Mayor Steve Adler's music industry plans; see today's press conference for an unveiling of CM Delia Garza's push for sustainable food and against food deserts – those and bigger issues like transportation and land-use planning remain in the very early, aspirational stages. Meanwhile, Council has a light agenda for today, and then will take three weeks off until their next meeting, the week after SXSW and spring break end. So what the heck, let's go fly kites and hear music!

Zilker Kite Festival is the nation's oldest kite festival, running since 1929. It takes flight on Sunday, March 6, 10am-5pm in Zilker Park, with an estimated 20,000 fans, and all proceeds benefiting the excellent work done by Communities in Schools, which provides school-based social services, and connections to community resources, to families in 39 AISD campuses. While the kite festival is always free, the Central Mar­ket Kite Fest Breakfast (8:30-10am) is a chance to enjoy extra perks for your donation. For $70, you get VIP parking, breakfast for four, a collectible Kite Fest kite, and a swag bag; pre-purchase at www.abckitefestival.org.

This year, the kite festival has also spun off the inaugural MossFest, a free family music festival at Zilker Hillside The­ater, with a great local lineup including White Ghost Shivers, Residual Kid, and Sara Hick­man, playing from 10am-4pm. Proceeds go to the Moss Pieratt Foundation, which funds research into sudden Unexplained Death in Childhood.

The French Legation, the oldest house in Austin, is hosting a free celebration for its 175th anniversary on Saturday, March 5, 11am-2pm, at 802 San Marcos St. Tour the beautiful grounds and the museum, and listen to stories of Texas' fight for independence, and how France recognized the Republic of Texas and built this legation in 1841. There will also be food, drink, kids' activities, and a silent auction. See www.frenchlegationmuseum.org.

The final round of the Austin Urban Music Festival R&B Challenge is this Sunday, March 6, at Huston-Tillotson University's King-Seabrook Chapel, 900 Chicon – 13 fresh musical acts squaring off in a battle of the bands for a chance to play at the Urban Music Festival, coming up April 1-2 at Auditorium Shores. It's free, but seating is limited. Doors open at 3pm and show starts at 4pm. For more info and Sunday's lineup, visit www.urbanmusicfest.com/rnbchallenge.

There are more than 171,000 active arrest warrants in the Austin Municipal Court, valued at more than $59.3 million, and if one or more of those has your name on it, the 2016 Great Texas Warrant Roundup is for you. There are two "walk-in" dockets a day – 8:30-11am and 1:30-3:45pm – starting Friday, March 4, and then Mon.-Thu., March 7-17. They offer payment plans or community service alternatives, and no one who shows up voluntarily will be arrested, which I always see as a great feature in an event.

Austin lost a very special part of its spirit this week: Henry Gonzalez wasn't as well-known as some of the other Armadillo Art Squad artists – Jim Franklin, Guy Juke, Micael Priest – but he was the heart and soul of that group in many ways, the rhythm section that kept the beat going, and more recently the man who made – pretty much literally – the South Austin Popular Culture Center (see more in "Playback"). Henry died on Monday after a long illness. He will be missed. And he will be celebrated; details will be announced in good time. 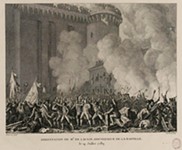 Public Notice: The Month of Armed Rebellion
Bastille Day and other events 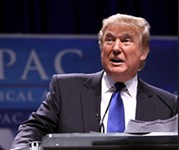