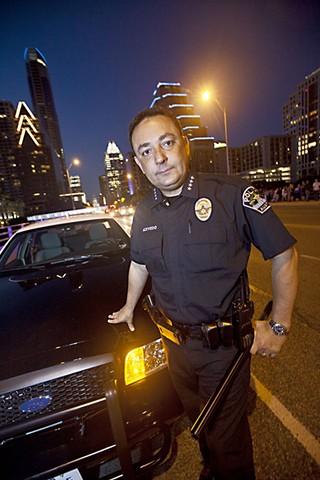 Police Chief Art Acevedo issued another indefinite suspension last Tuesday, terminating 18-year veteran officer Carlos Saldivar for insubordination, disobedience, and allegations of dishonesty. Saldivar's suspension arrives nine years after a 90-day suspension he incurred (and agreed not to appeal) after Acevedo and an Internal Affairs investigation determined that Saldi­var was carrying on a sexual relationship with his corporal – though some officers report that Saldivar and his corporal have long denied accusations of any affair, and instead insist that they are just good friends.

Fast forward to last July, when Saldivar received a counseling memo for three incidents in which he was believed to be insubordinate. The troubles continued in late August, when Saldivar was found to have left his 7am-5pm shift at the Austin Police Academy 15 minutes early to pick said corporal up at the airport and take her to her car. Questioned about leaving early, Saldivar was "evasive," Acevedo wrote in a disciplinary memo, and tried to "mitigate his culpability." Two months later, during an Internal Affairs meeting concerning a complaint he filed alleging that APD Training Academy Commander Andrew Michael had threatened him during a meeting, investigators found holes in Saldivar's testimony. (Saldivar originally reported that Michael said, verbatim, that "if [another officer] went to IA, he wouldn't be the only one going to IA." Later, it was determined that those words were never directly spoken by Saldivar's commander.)

"In sum," Acevedo wrote, "Officer Saldivar falsely accused Commander Michael of threatening him to create a false retaliation claim." That was enough to act on the chief's assertion from Saldivar's previous suspension: If he did anything again, he was going to get canned.

Saldivar is appealing the suspension. He's being represented by CLEAT attorney Grant Goodwin. Offic­ers have remarked on the sensitive nature of the termination, with it being rooted in an affair a married man is claiming to have never had with a married co-worker. Goodwin did not respond to the Chronicle's request for comment on the appeal.