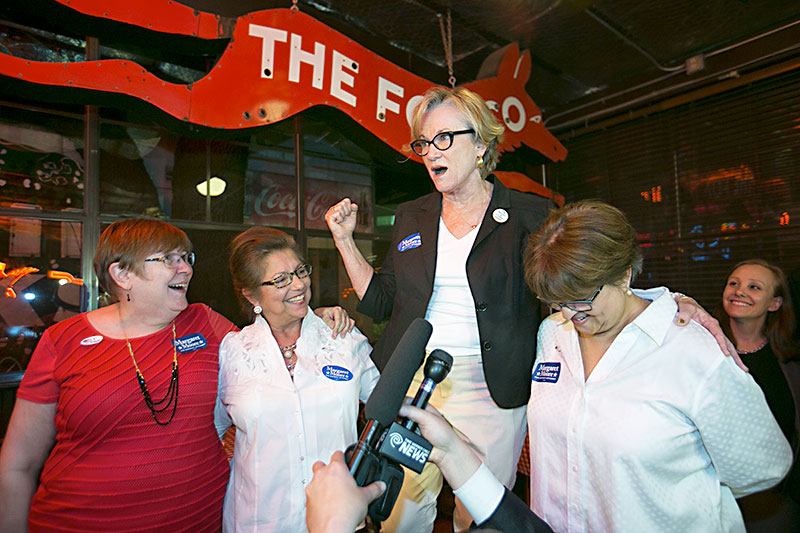 Margaret Moore celebrating with her supporters (Photo by Jana Birchum)

At 9pm on election night, before the first set of Election Day numbers came in, Gary Cobb was still hopeful. When early voting numbers were released a couple hours prior, Cobb had learned Travis County Democrats were supporting his opponent Margaret Moore at a rate of 2-to-1. "It's not what we expected," Cobb said, still smiling in front of the stage Downtown at El Sol y La Luna. He cited recent polling that indicated a 13% lead over Moore, and the hard campaign tactics he deployed up through the weekend. "I can't imagine anything we could have done differently," he said. The presumed front-runner was a shoo-in through the summer and early fall – the lone Democratic candidate and an established member of the D.A.'s office. But by Tuesday's end, Cobb had taken only 34% of the vote. "Clearly the voters of Travis County have spoken to what they want in a district attorney," he said.

Across the river, Moore's supporters gathered at Threadgill's, where their candidate delivered a not-quite-yet-official victory speech after the second set of Election Day results came in. Reflecting the next day, she said, "I had a pretty good feeling that I would lead into a run-off, and that it might be reachable without a run-off. ... but it was feeling less likely because he had run so much TV and sent out mailers. We didn't have that kind of money. We thought he was closing the gap, but it turns out he wasn't." She told the Chron­icle the margin of victory indicates that voters wanted a D.A. who can provide "new leadership and [administer] a thorough going-over by someone with experience and integrity. That's why I got in the race. I thought I fit that description, and I know I can do that job."

Among those supporters at Threadgill's was Rick Reed, the third candidate in the race, who – like Moore – filed for candidacy after learning details of Cobb's personal life (see "Finding a New D.A.," Jan. 22). Reed, who never stood a chance throughout the race and realized it two weeks ago (he told the Chronicle he's got boxes of unused campaign signs stacked in his garage), said he voted for Moore and endorsed her publicly Tuesday morning to "hopefully suppress my own numbers" in her favor. In that case, his Anybody-But-Cobb platform proved effective. Moore beat her nearest challenger by 30,000 votes, and now turns her attention toward November's general election and Republican nominee Maura Phelan.