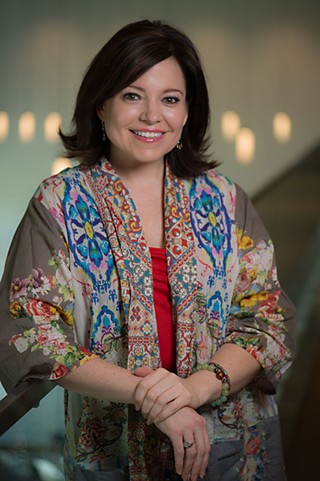 
Accountants and university lecturers are the butt of jokes more than they tell them, but at Houston's Rice University, Kim McGaw is trying to bring some levity to professional development. She said, "People ask me, how can finance be creative? I'm like, 'Bernie Madoff, hello?'"

McGaw never aimed for academia. The Northwestern graduate was working at a Chicago software firm when she dumped corporate life for a career delivering the Windy City's greatest export: comedy. She started learning improv at the ImprovOlym­pic under legendary talent-spotter Del Close, before making it to the conservatory at the world-famous Second City. "That's where Tina Fey and Amy Poehler came out of," said McGaw. "They have the best classes ever, because you learn by doing."

While it's easy to get starstruck about Second City's long comedic legacy, from John Belushi to Stephen Colbert, much of its business is corporate training events. Seeing their success, McGaw started building her own client base, with clients including Shell and the Young Presidents' Organization. "They wanted to do fun team-building and communications workshops."

In 2005, after a red-eye corporate event in Houston, McGaw was approached by Rice University Dean of Continuing Studies Mary McIntire. "She was the only person not cracking up," McGaw said, "and as it turns out, she was already planning the course I was going to teach for her." McGaw said that class, called Thinking on Your Feet, was intended to create Monty Python-esque anarchy, "teaching them how to do a quick Winston Churchill quip." However, she quickly learned "what people really wanted was confidence in social situations and business situations, where they could use humor to deflect and connect better with people." McIntire didn't hire her just for laughs, but to be a real, formal educator – which McGaw was doing anyway. She said, "In improv, those classes are run in a very tight way. You do have fun, but they're really controlled, so you can feel free to take risks." In her Rice classroom, that means throwing out the simple yes/no approach to teaching. "When someone comes on deck, maybe instead of saying, 'That's the wrong answer,' saying, 'How did you arrive at that answer? Tell me how you got there.'"

Of course, drop a comic into academia, and their course quickly becomes known as the rowdiest on campus. "The very first time we taught, we got kicked out," McGaw said. "They put us in the engineering building at night by ourselves because we were too loud, and I regarded that as a badge of honor." Like any first-time lecturer with a noise complaint, she thought she'd be in trouble. Instead, McIntire was elated that her students were actually having fun. "The dean brought me on because we need to shake things up, because we need to make things more fun and engaging."

In 2014 McGaw became director of professional programs, so now she's in charge of not just one classroom, but of building whole programs. That means finding talented lecturers and professionals who share her nontraditional, nonacademic background. "Some of the best teachers you'll ever have haven't taught a class yet," McGaw said. "So I'll hire attorneys who are gamers. I'll find people who really like puzzles and challenges. So we're seeing more people not just showing up, but really participating."

Over the last decade, the school's growth area has been in online classes. "Our survival depends on it," she said, "and we can also have a bigger impact. We can have people in the classroom who otherwise could never make it. Moms, people in the 'burbs, people from other countries."

It may seem a far cry from her rowdy Rice classroom, but online or off, McGaw is still trying to solve the same problem: how to engage students and break the learning experience wide open. She admits, "If you have a three-hour treasury class, and you're going over tax, it's dry, dry." To break up the potential monotony of an online financial planning course, she used back-to-back drawing, "where one person has an image, and the other person has to draw it, depending on what they're told." In an improv class, that's a teaching exercise done blindfolded; online, the teller just hides the image from their camera. The exercise was fun, and got the students engaged. Yet the professional development benefit was that the students enhanced their communication skills – a vital tool for financial planners, whose job involves making sure they don't bury clients in a welter of numbers. McGaw said, "We're starting to find ways to apply improv games to very serious topics."