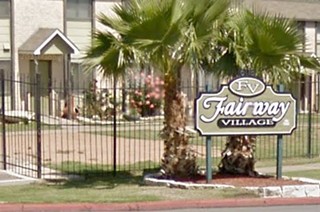 Eight tenants of Fairway Village Apart­ments are suing property owners Sage Apart­ment Communities Inc. and their subsidiary Fairway Village Apartments LLC for unlawful mistreatment and negligence. The complex is a project-based Section 8 property, meaning it receives money from the U.S. Department of Housing and Urban Development to offer reduced rental rates to low-income families. Tina Greene, one of the plaintiffs, said that with no affordable housing alternatives nearby, the tenants had no other choice but to seek justice from the courts. "I think this lawsuit will show them that we are going to fight for our rights," she said.

The owners began major construction on the property in March 2015 to improve the complex's outdated plumbing system. Residents say they were offered two options to compensate them for the inconvenience: a $2,400 stipend or a temporary stay at a nearby hotel. Some, however, claim that they never received the stipend after requesting it. Southwest Housing Com­pli­ance Corporation – the nonprofit subsidiary of the city's Housing Authority which serves as contract administrator for Section 8 projects – investigated the complaint, along with 10 other complaints made against Fairway Village last year, but determined the property management to be in compliance in every case. Greene feels that she and the others who complained have since faced retaliation from property management. "They've singled out those of us who put up a fight," she said.

Unable to relocate, some families found themselves stuck in a construction zone. Tenants, some elderly or disabled, say they have had to deal with constant noise and random holes surrounding their residence. Greene's mother, Rosemary Martinez, who uses a walker to get around, fell into one of the holes last year. "My leg was bruised and swollen," she said.

In coordination with the ongoing construction, residents say, the property managers have routinely shut off water and electricity to residents, often without warning. These withholdings, said the plaintiffs' attorney Brian McGiverin, constitute illegal discrimination against renters who are disabled, because it has a disproportionate effect on their health and well-being. In addition, the plaintiffs allege that property owners have deferred important repairs, including plumbing and heating maintenance. Some tenants have also spotted rats and cockroaches since construction started. "There's no reason why we should be living like this," Martinez said. "This isn't some poor country, this is the United States! This is the capital of Texas!"

Fairway Village was one of the sites hit by the Halloween floods last year, and the residents claim that it was made even worse by construction workers failing to remove debris from the storm drain in the parking lot. As a result, many of the tenants' vehicles were damaged. Marisol Gauna, a Fair­way tenant of six years, said that a representative from Sage Apartment Com­mun­ities Inc. had visited residents after the flooding and told them that they would be reimbursed for repairs. Weeks later, they received a letter from the apartment office stating that there would be no reimbursements. Gauna, who paid out of pocket to repair her car, said that she felt slighted by property management. "One of the maintenance men told me that I should have been paying closer attention to the weather," she said.

In January of this year, the property owners threatened some tenants with eviction unless they paid thousands of dollars. According to McGiverin, considering that most Fairway Village renters pay around $200 each month, these excessive totals could only be arrived at by including late fees, which would contradict the terms of their lease, or by including unpaid rent from more than two years before, which is beyond the statute of limitations. Martinez, who has lived on the property for almost seven years, said that these threats were nothing new. "Almost every year there's a new manager," she said, "and every year they try this."

The plaintiffs are grateful that their testimony is finally being recognized. "We tried so hard," Martinez said, "to get somebody to pay attention to what we're going through, and nobody ever listened, until Brian started working with us." McGiverin said that the property owners have been able to shirk their legal obligations partly due to the city Code Enforcement Department's failure to follow up with the tenants' complaints. "It's a matter of priority," he said. "The Depart­ment focuses on inspecting higher-value properties Downtown or elsewhere rather than investigating claims made by people living in poverty."

At press time, Sage Apartment Com­mun­ities Inc. had not responded to the Chronicle's request for comment.