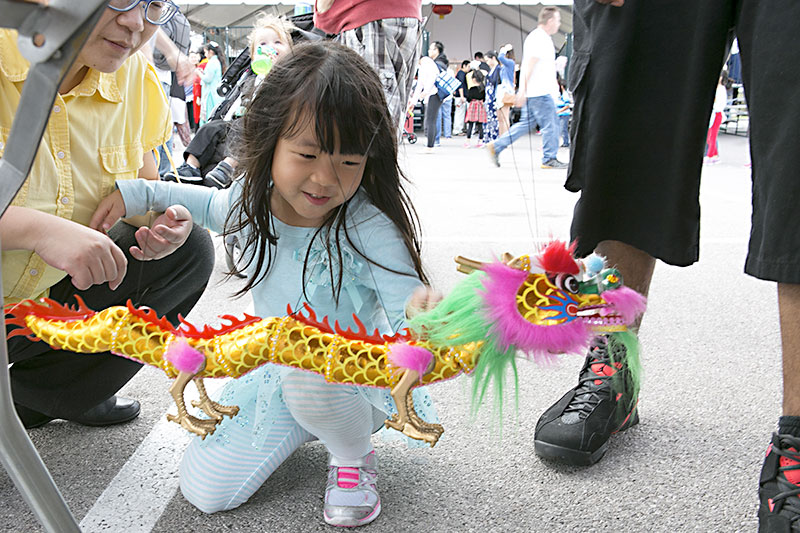 Hanna, 4, admires a dragon puppet during the Chinese New Year celebration at the Chinatown Center on Saturday, Feb. 20. In addition to the mechanical bull and rock climbing, families enjoyed an evening market and four hours of live music. On Sunday, they rang in the new year properly with fireworks. (Photo by Jana Birchum)

City Council meets today, Feb. 25, with an agenda somewhat lightened by using Tuesday's work session to wrestle with short-term rental regs and a number of briefings. Among other things, they'll take up gender discrimination in city employment, and a renewed proposal to designate Rosewood Courts for historical preservation. See "Council: Not Just STRs," Feb. 26.

Capital Metro CEO Linda Watson is under fire for receiving a 5% pay raise as the transit agency reported reduced ridership. Staff have blamed bad weather, cheap gas, and competition from Uber and Lyft for the 7.7% year-on-year drop.

Two men were arrested Monday in Northeast Austin after police found them to have stabbed each other with what an arrest affidavit calls a "martial arts throwing star." Police say the fight involved only one throwing star, and that it changed hands midway through the fight, thus allowing it to be used against both people.

MoPacalypse 2016: The latest stage in construction on the new MoPac toll roads brought traffic to a gridlock on Monday, and TxDOT is struggling to find a solution, since the current plan will have the vital traffic artery reduced to two lanes between the busy Enfield Road and Sixth Street exits until September.

The U.S. Supreme Court will hear oral arguments in Whole Woman's Health v. Hellerstedt next week; the case challenges two provisions of the draconian four-part Texas abortion law, House Bill 2. With the death of Justice Antonin Scalia (a certain vote in favor of the anti-choice rules), the decision still likely comes down to Justice Anthony Kennedy, seen as a swing vote.

Former Governor Rick Perry will walk away from charges that he abused his power in trying to force Travis Co. District Attorney Rosemary Lehmberg out of office. On Feb. 24, the Texas Court of Criminal Appeals sent the case back down to the lower court with instructions it be dismissed. See "Perry Will Walk on Charges," Feb. 24.

A grand jury has declined to indict APD Officer Luke Serrato for the Feb. 2015 shooting and killing of Sawyer Flache, shot by the APD SWAT team member after Serrato saw him take aim at an APD helicopter. See "News Roundup: A Deadly Shooting, Rick Perry, and City Council," Feb. 9, 2015.