Ubering to the Polls

TNC referendum scheduled for a vote May 7 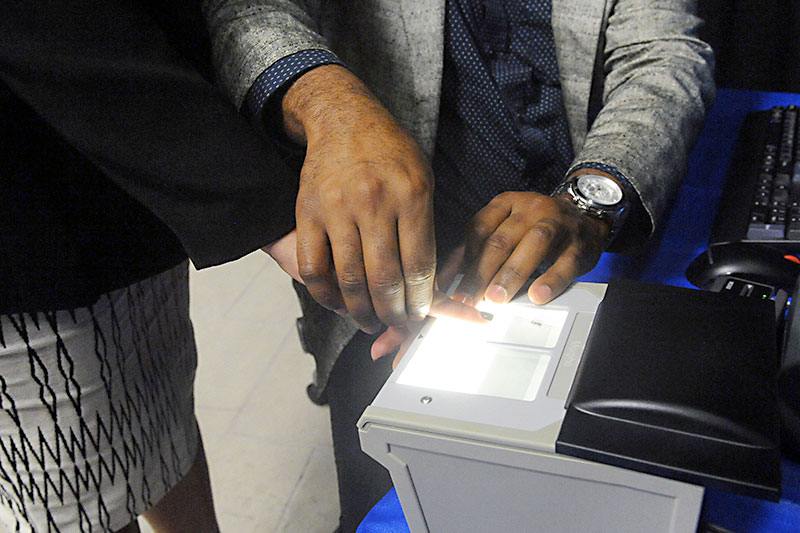 Fingerprinting has been a point of contention between Uber/Lyft and City Council. (Photo by John Anderson)

How will Austin regulate transportation network companies like Uber and Lyft? Following Council's 2-8-1 rejection (CMs Ellen Troxclair and Sheri Gallo for, and CM Don Zimmerman abstaining) of a petition-led, TNC-friendly ordinance at last week's meeting, the city will hold a May 7 election to decide whether to stick with the Council's December ordinance, or go with the petition's proposed ordinance, which is essentially the same as regulations put into place back in October 2014 – months after Uber began operating in Austin, without permission, in June.

While the vote is a long way off, this looks to be a win for Uber and Lyft, who reject almost all regulation. Lyft does not operate in any city that requires mandatory fingerprinting, and the company left Houston when the city made that requirement. While Uber has stayed in Houston, company reps claim that the regulation has significantly hurt user experience. Recently, Uber stopped offering service in Midland and Galveston, blaming its departure on "burdensome regulations," though the city of Midland claims that it "met all of [Uber's] requests" in drafting their ordinance.

Austin's December ordinance, with mandatory fingerprinting being the most controversial issue, would regulate TNCs and TNC drivers much like taxi companies and drivers, and other paid drivers. Cur­rent­ly, TNCs handle background checks on their own.

Uber is "inspired by the Austinites who have offered their continuous support" and is "optimistic that they will speak out once more with their votes on May 7." Still, according to an Uber spokesperson, Council blew their chance to listen to the "tens of thousands of people" who've made it clear "they want to keep ridesharing in Austin," and had the opportunity to "prevent a costly election" (the election will cost the city between $500,000 and $900,000).

Of course, many of the petitioners who want to "keep ridesharing in Austin" don't seem to realize – likely thanks to the TNCs' campaigns – that ridesharing is not, nor has it ever been, under the threat of removal from Austin. As Mobility Committee Chair Ann Kitchen made clear to Chronicle at the end of January: "Nobody on the Council wants the TNCs to leave, and nobody on the Council is banning or pushing TNCs out. It's their choice. It's Uber and Lyft's choice. We're not kicking them out."

Despite the mayor's various efforts at compromise, the May election was almost guaranteed to happen: City Clerk Jannette Goodall had already validated the minimum 19,765 signatures from Ridesharing Works for Austin's 65,000-plus signature petition, demanding the Council either pass the petition-generated ordinance or leave it up to voters.

Uber and Lyft activists note that Austin's DWI crashes have dropped 23% since ridesharing came to the city (while true, it's not clear how much of that drop can be credited to TNCs). Many people, including Uber's Adam Blinick, have argued, "Please don't fix what is not broken."

But public safety advocates, like Kitchen, want more regulations in order to address the sexual assaults committed by TNC drivers. In 2015, Austin Police received at least seven such reports, five against Uber drivers and two against Lyft drivers. In those seven cases, the victim had ordered a TNC after drinking in order to avoid drunk driving. "I don't think that our community needs to choose between the risk of sexual assault and having a ride," Kitchen says. "That's a false choice, and our community is smarter than that, and much more innovative than that." Kitchen has noted that fingerprinting is the only way to be 100% sure that a person's driver's license and Social Security card – and therefore the entire background check – are legitimate.

With that said, it's not especially clear that fingerprinting will actually make TNCs much, if any, safer. In 2015, there were also three reports of sexual assaults by cab drivers, who are currently fingerprinted. Not­ably, Mayor Adler did tell the Chron­icle, "We also know that our police department and our state public safety officials are telling us that it's safer if drivers are fingerprinted, if for no other reason than post-incident it's easier to investigate."