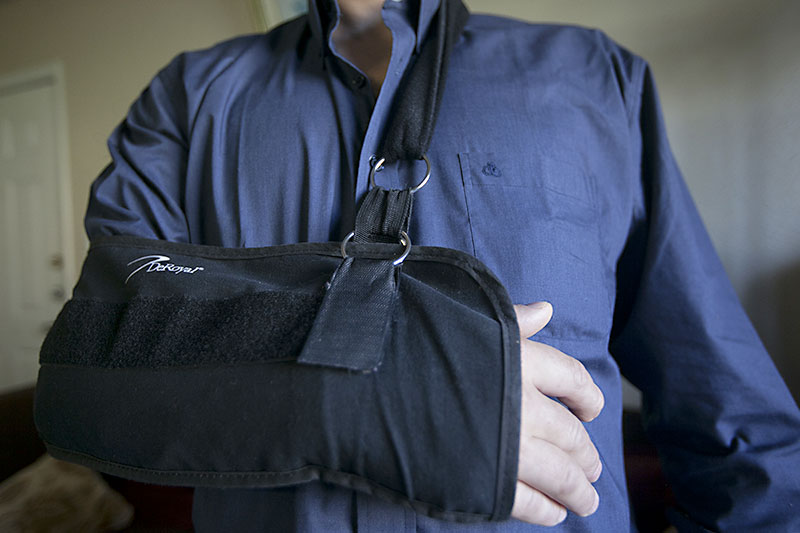 Mazin lost the use of his arm after he was hit by a stray bullet, which remains lodged in his arm. He is currently undergoing physical therapy. (Photo by Jana Birchum)

Until 2011, Mazin lived a simple life in Syria; politics were not part of it. His life revolved around his butcher shop and small restaurant, his wife and four children. But by the time the Karm al-Zeitoun massacre took place in his hometown, Homs, in 2012, Mazin's life had become impossible.

Mazin (whose last name has been withheld to protect his privacy) saw his neighbors slaughtered. Girls as young as 10 were raped. Mazin and his family lived every day ready to leave home at any moment. "I walked around carrying in my pockets all the cash I had, 100,000 Syrian pounds," Mazin tells the Chronicle in Arabic. When a rocket crashed into Mazin's bedroom, the family decided they had no choice but to flee. Homs is one of the most damaged cities in Syria. Mazin and his family, just like thousands of other Syrians, first immigrated to Jordan. (Syrian refugees now constitute 21% of Jordan's population.)

The cost of living in Jordan was high, and Mazin was not legally allowed to work. A reprieve came for the family when the United Nations High Commissioner for Refugees (UNHCR) approved their request to immigrate to the U.S. Last August, they arrived in Austin, Texas, with their remaining belongings, $200, and hope for their future.

Although Mazin and his family were lucky to survive the Syrian war, they're still suffering from its repercussions. Mazin was struck in the right arm by a stray bullet, which has caused nerve damage. The bullet remains lodged in his arm, because doctors believe that removal could lead to full paralysis of the limb. Mazin hopes that physical therapy will help him regain its use. Mazin must also deal with the grief of losing his brother, who has been missing since 2012. "We do not know what happened to him," Mazin says.

Mazin's family is an example of the Syrian families that Governor Greg Abbott and other Texas politicians have been working fiercely to block from resettling in Texas. Last September the Obama administration announced its plans to resettle about 10,000 Syrian refugees during the coming year. But after Paris was attacked by terrorists in November, Abbott wrote a letter to the president saying that Texas would not accept Syrian refugees because "American humanitarian compassion could be exploited to expose Americans to similar deadly danger."

A few weeks later, Texas Attorney General Ken Paxton filed suit against the federal government to stop the relocation of refugees from Syria to Texas, saying in a statement, "The point of this lawsuit is not about specific refugees. It is about protecting Texans by ensuring that the federal government fulfills its obligation to properly vet the refugees and cooperate and consult with the state."

U.S. Rep. Michael McCaul (R-Texas), sponsored a bill, which the House passed in November, to toughen restrictions on the resettlement of Syrian and Iraqi refugees. It requires the FBI director, the secretary of Homeland Security, and the director of National Intelligence to personally sign off on each refugee as being "not a threat to the security of the U.S." However, the current U.S. refugee screening process is already the most rigorous worldwide, says Refugee Services of Texas CEO Aaron Rippen­kroe­ger. It can take two years for a Syrian refugee to make it through the screening process, which entails being vetted by the State Department, the FBI, the Department of Homeland Security, and the Defense Department. And that's only after completing a separate UNHCR vetting process, which can take more than a year on its own. It is hard to imagine that a terrorist planning to attack the U.S. would decide to go through the refugee resettlement program. "It would be the least efficient route a terrorist can take," Rippenkroeger says. In addition, refugees sometimes find themselves rejected after having spent months going through the screening process.

The UNHCR reports that only about 1% of refugees have the opportunity to be resettled worldwide. "The refugees we resettle from the Middle East are fleeing the same kind of terror which unfolded in Paris, Beirut, and elsewhere," Rippen­kroe­ger said. "They do not bring terror with them. Rather, they are escaping it. The United States can continue to welcome refugees while ensuring our own security." RST has welcomed about 90 Syrian refugees to Texas since the beginning of the conflict.

While the Paris attacks seemed to incite Texas leaders' call to ban Syrian refugees, their efforts had begun beforehand. Last October, U.S. Rep. Brian Babin (R-Texas) introduced the Resettlement Account­abil­ity National Security Act, which would place an immediate suspension on the entire U.S. refugee resettlement program until the Government Accountability Office conducts a study to determine the economic costs of resettlement, and Congress analyzed the national security risk. The bill has yet to be voted on by the House. Last week, Paxton renewed his efforts to block Syrian refugees, asking a federal judge to issue an emergency order to immediately stop the federal government from placing any more refugees in Texas. His request was denied; the state's lawsuit is still making its way through court.

Rippenkroeger says the money that refugees end up contributing to the American economy surpasses the up-front cost of resettlement. Since the current resettlement model requires refugees to become self-sufficient within six months, refugees begin working and paying taxes not long after arriving in the U.S. Refugees are strong employees, Rippenkroeger adds, explaining that some businesses seek to recruit refugees specifically.

When asked by the Chronicle how he feels about Texas politicians' efforts to block Syrian refugees, Mazin was unable to answer, as he was not aware of those efforts. As a person who lost his home, livelihood, brother, and country to civil war, Mazin is only concerned with rebuilding his life and establishing a place he can call home.