Council Brawls on PUDs: "Everything Is Now a Backroom Deal"

Predicting City Council superlatives, you wouldn't necessarily peg District 7 CM Leslie Pool as Most Likely to Send a Savage Tweet Meant as a DM. But that wasn't the only thing that came as a surprise at last Thursday's Council meeting, even for those on the dais. Pool's tweet, meant for a staffer, was in reaction to her being blindsided by an amendment put forth by the mayor on planned unit developments.

There's been debate since October about Council adjusting the code to treat PUDs on zoned and unzoned land the same across the board – requiring a council supermajority to approve a PUD which the Planning Commission has opposed. The mayor's amendment, supported by CM Sheri Gallo, would have required a PC supermajority to trigger the need for a Council supermajority – not just on unzoned land, but anywhere – in essence, loosening the current requirement instead of tightening it.

It wasn't only Pool – who gave an impassioned speech calling the new proposal a "cynical move" and expressing concern that Adler's amendment would "undercut the single tool that our neighbors have in order to ensure that our community values" are maintained – who was angered. The Bull Creek Road Coalition similarly expressed consternation with the mayor's actions: "The real story is that this City Council is running amok, changing longstanding city policy from the dais with no public input," said BCRC president Sara Speights. "The mayor repeatedly lays out and passes major amendments from the dais at the last minute without public input. Everything is now a backroom deal."

"One of the things that we have not heard from our community is they wanted to see a loosening of the standards at the Planning Commission," reasoned Mayor Pro Tem Kathie Tovo on Thursday, before a revised amendment applying only to unzoned land was approved on first reading. "This is of great concern. I think what we're contemplating in front of us with this amendment is really diluting the control of neighborhood voices. This has been in place for decades, the provision for zoned land. What we would be doing with this amendment is certainly weakening it." 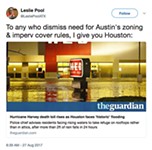