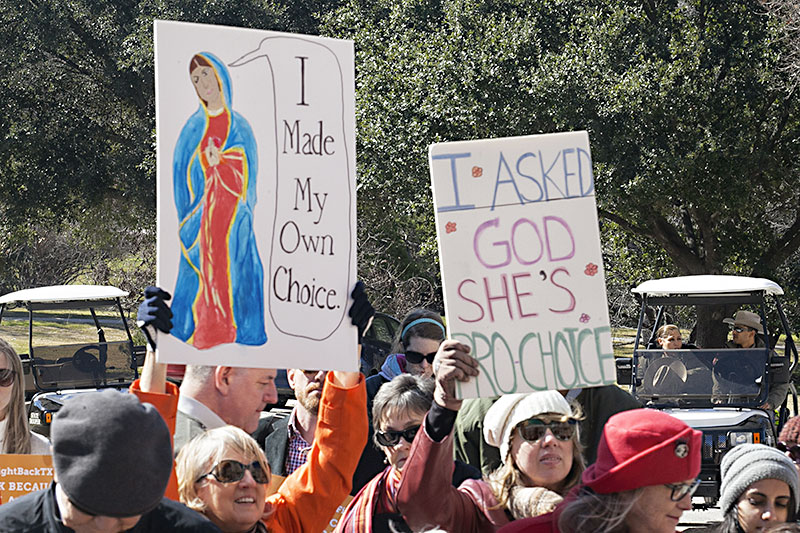 Activists and representatives from Whole Woman's Health, NARAL Pro-Choice America, and more gathered at the Capitol Jan. 22 to ring in the 43rd anniversary of Roe v. Wade. In mind that day for those groups and the women they serve was the upcoming showdown in March, when the U.S. Supreme Court will begin hearing arguments on Texas' controversial anti-abortion law, HB 2. (Photo by Jana Birchum)

Yes, We Have No Courthouse: Travis County Commissioners Court voted Tuesday to go "back to zero," in Judge Sarah Eckhardt's phrase, and re-evaluate several sites for a renewed civil courthouse project, in the wake of November's narrow defeat of a bond proposal to build at Third and Guadalupe.

The Austin Police Association filed a grievance Friday in connection to what APA Presi­dent Ken Casaday considers "retaliatory" tactics by Police Chief Art Acevedo. At issue is the way in which the chief is keeping recently retired Lt. Johnny McMiller from a six-figure payout on accrued sick pay. See "APA Files Grievance Against APD" online for a full rundown.

Vince Young swapped the sports pages for the police blotter on Jan. 25 when the Heisman runner-up and UT diversity and community engagement officer was arrested near campus, and charged with a misdemeanor offense of driving while intoxicated.

Talk About Backfiring: A Harris County grand jury on Monday cleared Planned Parenthood Gulf Coast of any wrongdoing and decided instead to indict two anti-abortion activists involved in making allegations against the provider. David Daleiden, director of the Center for Medical Progress – the anti-choice group behind the discredited undercover sting videos that attempt to show the sale of fetal tissue – and Sandra Merritt both face second-degree felonies for tampering with a governmental record.

President Barack Obama banned the practice of placing juveniles in solitary confinement in federal prisons Monday, the conclusion of a six-month evaluation by Attorney General Loretta Lynch. In an op-ed, he wrote that the change will affect roughly 10,000 current inmates, many of whom will now be increasingly moved into secure mental health units.

Trump Tantrum: GOP primary front-runner Donald Trump's campaign announced that he would not participate in Thursday's TV debate because he objects to Fox News host Megyn Kelly as a moderator. The campaign and Fox issued competing press release insults.