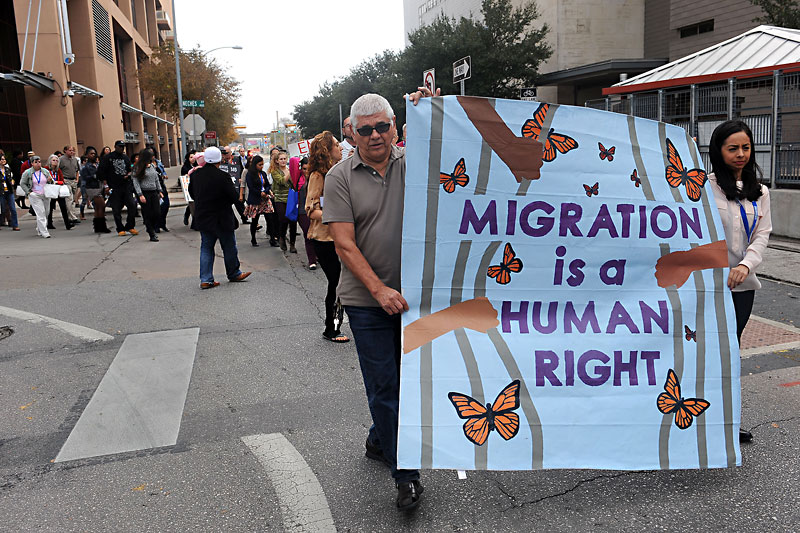 The new year has brought with it a renewed effort to seize and deport undocumented immigrants and refugees. On Jan. 4, Department of Homeland Security Sec­re­ta­ry Jeh Johnson issued a press release announcing, "This past weekend, Immigration and Customs Enforcement (ICE) engaged in concerted, nationwide enforcement operations to take into custody and return at a greater rate adults who entered this country illegally with children. This should come as no surprise. I have said publicly for months that individuals who constitute enforcement priorities, including families and unaccompanied children, will be removed." Johnson went on to say that the targets of the operation were "adults and their children who (i) were apprehended after May 1, 2014 crossing the southern border illegally, (ii) have been issued final orders of removal by an immigration court, and (iii) have exhausted appropriate legal remedies, and have no outstanding appeal or claim for asylum or other humanitarian relief under our laws."

Despite Johnson's claim that ICE would only be deporting those who had exhausted all claims for asylum, that has not turned out to be case in practice. Of the 121 families seized that weekend, 12 had their deportations halted by the Board of Immigration Appeals after filing requests for emergency stays. As a result, the raids have triggered widespread outrage, including among Democratic Congress members who support immigration reform. U.S. House Rep. Linda Sánchez, chair of the Congressional Hispanic Caucus, issued a press release saying, "Invading homes is inhumane and adds to the trauma of these families fleeing violence and oppression. Many recent immigrants from Guatemala, Honduras, and El Salvador are escaping one of the most dangerous regions in the world. ... As we begin a new session of Con­gress, we must find a better way to deal with the recently arrived young children and mothers. We must ensure that they are informed of their rights and provided counsel. And we must continue to fight for comprehensive immigration reform because it's the only way we will ever truly solve this problem."

In Austin, it is unclear whether anyone has been seized as part of the ICE raids. Rumors of raids on Rundberg and Down­town have circulated, but have not been confirmed. Regardless, there are many in the immigrant community who believe they're potential targets. For now, the primary response from immigrant rights advocates has been to organize "Know Your Rights" trainings for the undocumented, which largely consist of warning people not to open the door to ICE agents, as well as planning for families who might be left behind if some members were deported. Workers Defense Project plans to hold trainings every Thursday at 7pm, and City Council Member Greg Casar, whose District 4 has the largest number of undocumented immigrants in the city, said his office has received calls from constituents who are "afraid about the fact that ICE could be knocking on someone's door and taking them away." Casar said that his office is working on gathering information about the raids, including whether ICE has requested the assistance of local law enforcement. Of course, City Council can only do so much about what is a federal policy. "We don't want to give the impression that by City Council resolution, we're going to stop the raids," Casar said. In the spirit of "directing as much of our advocacy as possible toward solving problems," Casar's office plans to partner with Grass­roots Leadership to hold a community meeting, tentatively scheduled for Jan. 30. The meeting will include information on immigrants' rights as well as on other services, including places where those who fear deportation can seek sanctuary. 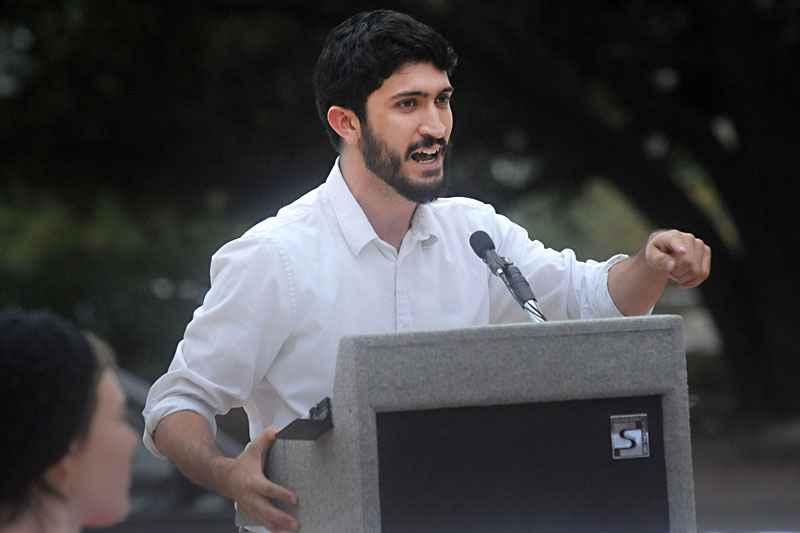 There is a long tradition of churches offering sanctuary to refugees, and the raids have reignited the momentum behind the Sanctuary Movement, a multidenominational group of religious organizations that have pledged to offer safe haven to immigrants facing deportation. Although no church in Austin has officially joined the organization, the First Unitarian Univer­sal­ist Church, which last year sheltered Sulma Franco, a LGBTQ activist who feared persecution in her home country, Guatemala, issued a statement denouncing the raids. The Rev. Chris Jimmerson told the Chronicle that the church leadership is currently discussing the possibility of joining the Sanctuary Movement with its members, and that they are definitely open to offering sanctuary on a case-by-case basis.

Katie Shepherd, an attorney with the CARA Pro Bono Project, has been part of the effort to halt the deportation of those seized in the raids. On Saturday, Jan. 9, she spoke on the phone with the Chronicle from the South Texas Family Residential Center in Dilley, Texas, where she had been meeting with her clients. Shepherd said that all of the 12 families (all of them mothers with children) at Dilley represented by CARA were granted emergency stays of removal. "The population that was targeted [in the raids] was very intentional," Shepherd believes. They are "individuals who had nominally had their day in court." The process for applying for asylum with the U.S. is notoriously difficult for applicants, as the Chronicle has previously reported. (See "Choosing Detention Over Death," Dec. 25, 2015.) People fleeing Central America are usually indigent and do not speak English. Indigenous people, disproportionately affected by the violence and upheaval in several countries, may not speak Spanish fluently. Because of this, people deserving of asylum are being denied it, contravening international law. The families Shepherd represents were seized from their homes in Dallas, Houston, Kansas City, and Atlanta. "In all of the cases," Shepherd said, "they were fleeing some sort of persecution," including extreme domestic violence, credible death threats, the possibility of their male children being recruited into a gang or their female children being forced into sex slavery, and/or the murder of family members. "It's not just gang violence, it's targeted gang violence," said Shepherd.

The women allege mistreatment during their time at Dilley. One night, Shepherd said, "the women were all woken up and told to pack their bags. They were taken to the airport along with families that were going to be deported," creating the fear that they were going to be deported as well, despite being in the process of applying for emergency stays. Other clients were so far along in the deportation process that they were literally pulled off a plane headed for El Salvador upon being granted their stays.

Although CARA succeeded in halting their Dilley clients' deportations, the women and children remain detained. "The next challenge is securing their release from the facility," Shepherd explained.

Rounding up families to be deported is the latest tactic in an ongoing effort by the federal government to prevent the influx of Central American immigrants and refugees. "The government's policy of family detention is not working; it's not sustainable," Shepherd said. Now, DHS is "testing new policy, deterrence by deportation. As the past week has shown, this policy is not going to work. ... These people have credible asylum claims. If you deport them, it's a violation of international law, and it undermines the entire asylum system."

The U.S. government is well aware of the severity of the violence Central Americans experience in their home countries. A travel warning for U.S. citizens issued by the State Department on Oct. 30 dispassionately describes the situation in Honduras: "The Government of Honduras lacks sufficient resources to properly respond to, investigate, and prosecute cases. As a result, criminals operate with a high degree of impunity throughout Honduras. ... Transnational criminal organizations conduct narcotics trafficking and other unlawful activities throughout the country and use violence to control drug trafficking routes and carry out criminal activity. Other criminals, acting both individually and in gangs in Tegucigalpa, San Pedro Sula, and other large cities, are known to commit crimes such as murder, kidnapping, extortion, carjacking, armed robbery, rape, and other aggravated assaults." 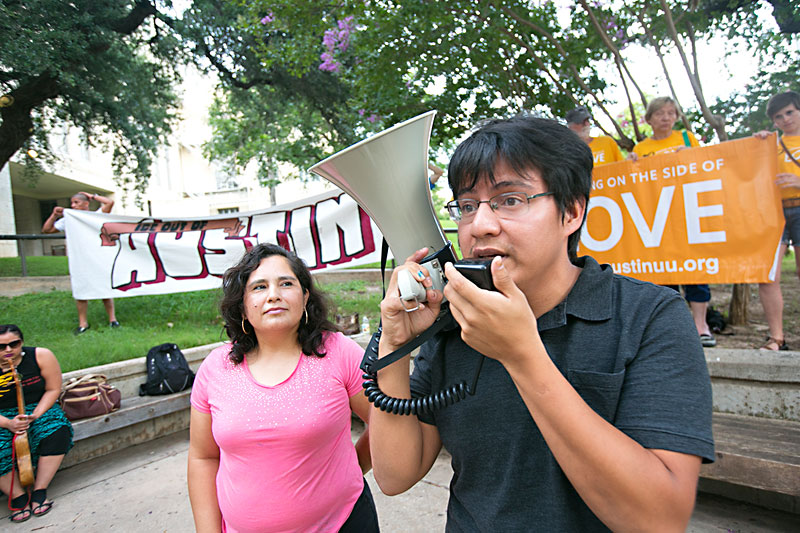 Many observers believe the raids are an attempt by the Obama administration to demonstrate that it can be tough on immigration, even as it pushes for immigration reform. The lawsuit filed by 26 states challenging the constitutionality of Oba­ma's executive action expanding DACA and DAPA is scheduled to be heard by the Supreme Court this year. The raids are "proof that Obama doesn't care about actual immigrant community members," said Grass­roots Leadership Immigration Organ­izer Alejandro Caceres. "We're political pawns."

Caceres said his mother was deported three times after traveling from Honduras to the U.S. during the late Eighties and early Nineties. Every time she got off the plane, Caceres said, she would immediately begin her journey again. The gang violence had just begun in earnest, and she knew there was "zero future" for her and her family. Caceres said that most immigrants and refugees know the dangers of coming to the U.S., although they're not aware they may be detained. Even so, detention is "still a better option" than death.

Caceres and others believe the U.S. government needs to acknowledge its role in creating the upheaval that has led to mass migration. Much of the violence in Central America is tied to the drug cartels that have flourished during the many-decades-long war on drugs, while economic instability has deepened as a result of the North Amer­ican Free Trade Agreement. "But that's not going to happen," Caceres said, "because then my coffee wouldn't cost $1.50."