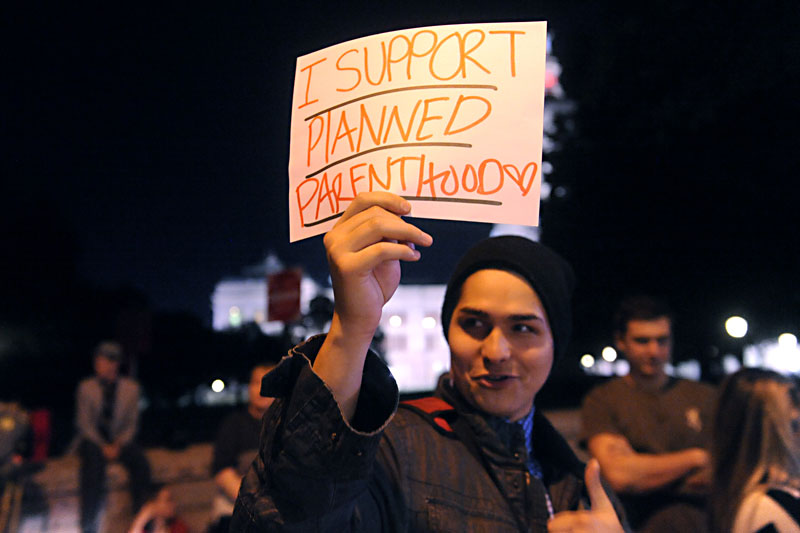 Protester shows support for Planned Parenthood during a candlelight vigil at the Texas State Capitol Dec. 10. (Photo by John Anderson)

After issuing a stopgap to the disastrous final provision of anti-abortion law House Bill 2 in late June, the U.S. Supreme Court decided to take up Whole Woman's Health v. Cole for review in November. In a case that is expected to set the course for abortion rights nationwide, the nine justices must determine if the Texas Legislature can get away with purporting to protect the health and safety of women with a law that painfully shows women will instead suffer. A ruling is expected by June.

2) Kicked Out, Fighting Back

Like the classy chap he is, Gov. Greg Abbott first announced the state would kick Planned Parenthood out of the Medicaid program via Twitter. Later that week, the state officials sent the health care provider a letter announcing they would soon be booted out of the program based on the notorious, highly edited sting videos pushed by anti-choice group the Center for Medical Progress. The good news is that courts have successfully blocked similar attempts in other states, and PP has hit back with a class action lawsuit in November claiming the state is breaking federal Medicaid law. A hearing date has yet to be confirmed.

Conservative legislators managed to drastically chip away at a process meant to help typically abused or neglected teenagers access abortion with HB 3994. Judicial bypass – the legal process by which a teenager averts parental consent to undergo abortion through securing permission from a judge – is considered an important "safety net" for teens. That safeguard was severely eroded at the hands of the Lege, namely bill author Rep. Geanie Morrison, R-Victoria, who added substantial barriers to the process, reaffirming that lawmakers are more interested in politics than protecting a vulnerable population.

The damage left in the wake of HB 2 continued this year: Only 18 abortion clinics remain of the 41 that existed before parts of the law went into effect. Stud­ies from the UT-based Texas Policy Eval­ua­tion Project showed wait times to get an appointment have drastically risen (up to 20 days) and, startlingly, as many as 240,000 women are estimated to have attempted to self-induce their abortions. If the final part of HB 2 passes legal muster at SCOTUS, Texas will have fewer than 10 abortion clinics for a population of nearly 5 million reproductive-age women.

In a 9-2 vote, City Council stood with Planned Parenthood by amending the city's federal and state legislative agendas to include lobbying support for any bill that would maintain or expand funding for the provider or women's health care in general. Travis County commissioners followed suit, lending their support in a 3-1-1 vote last month. With all the hostility thrown at Plan­ned Parenthood this year, it's a relief to see the city and county showing some love.

In a legislative maneuver overtly meant to punish abortion providers, lawmakers crafted the state budget to exclude Planned Parenthood patients from a lifesaving breast and cervical cancer screenings program. While cancer survivors condemned the move as life-threatening, it did little to stop the governor from signing the budget. One bright spot: Tenacious local protester Sadie Hernandez camped out at the Governor's Mansion to rally against the cuts, drawing national media attention to the issue.

With legislators doubting Texas women's ability to make autonomous decisions about their own bodies at every turn, a coalition of seven progressive organizations (including NARAL Pro-Choice and the ACLU) struck back in February, unveiling a new multiyear policy campaign to ensure women are able to make their own health care decisions. The "Trust. Respect. Access." initiative also seeks to repeal anti-choice laws and introduce bills that support women's health care.

In the ongoing assault on Planned Parenthood, state officials barged into the provider's offices in four cities completely unannounced in late October, demanding thousands of personal patient records and sensitive information, including clinical notes and lab results from 2010 to the present. While they later slightly refined their request, the state's intrusive theatrics prove they'll stop at nothing to intimidate the provider.

Taxpayer-funded crisis pregnancy centers – the network of nonmedical, religious pseudo-clinics meant to deter women from undergoing abortion – received double the funding from magnanimous anti-choice lawmakers in 2015. While actual health clinics that offer preventative, lifesaving services are shuttering by the dozens, the CPC propaganda-mills hope to usher more women into their doors to feed them (documented) medical misinformation.

While this year's Legislative session shepherded some dangerous bills to the governor's desk, a handful of atrocious potential laws thankfully died – some due to Republican infighting: legislation that would have banned health insurance plans from covering abortion care, given legal representation to fetuses, and prevented women from obtaining abortions in cases of fetal abnormality all failed to pass. 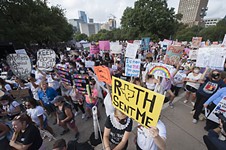 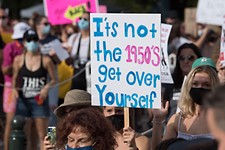