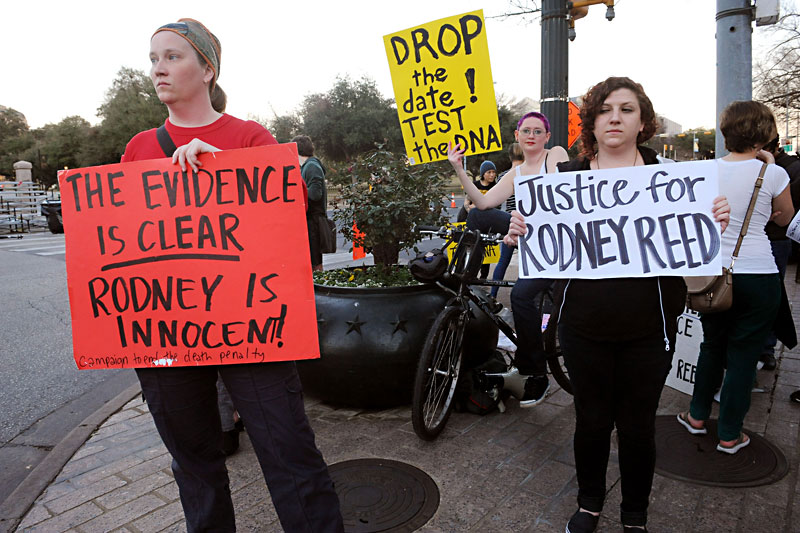 1) What Happened to Samantha Dean?

A pregnant employee of the Kyle PD shows up dead behind a Dumpster near a Bastrop County building. Four-year APD veteran VonTrey Clark becomes a person of interest in the killing. He's indicted on charges of capital murder in October, as is an associate, Kevin Leo Watson. Clark pleaded not guilty to the charges in November.

A century-old loophole officially known as "Supremacy Clause immunity" allowed former APD Detective Charles Kleinert to escape charges of manslaughter for the July 2013 death of Larry Jackson Jr. Kleinert had been indicted on the charges by a Travis County grand jury, but lawyered his way into federal court in early 2015, where Judge Lee Yeakel dropped his charges under the clause, which grants an unimaginable amount of immunity to anybody working on a federal task force.

A new law – House Bill 549 – forced in-person visitation back onto the agendas of most county jailers after half a decade spent watching most jails convert to video visitation. In September, Travis County commissioners settled on a method for funding the re-establishment. Two months later, former Chronicle staffer Jordan Smith uncovered a database of 70 million phone calls video visitation provider Securus had recorded without permission, stripping the Dallas company of its credence.

The now-iconic death row inmate got a last-minute stay of execution after the Texas Court of Criminal Appeals decided it needed more time to consider newly discovered evidence that supports his claims of innocence in the murder of Stacey Stites. At issue, among a new set of affidavits filed in support of the 47-year-old, are arguments from forensic pathologists concluding that Stites did not die during the time frame people previously believed, and that she was moved from one location to another some time after her death.

The 23-year-old Killeen resident arrested last March after driving a car through a SXSW crowd gathered on Red River Street, killing four, was found guilty of capital murder in November and sentenced to life in prison.

6) The Plot to Kill Julie Kocurek

Details are still forthcoming on the background motivation for a November attempt to assassinate State District Judge Julie Kocur­ek. Chimene Onyeri was arrested in Hous­ton (on charges that he committed another murder) a week after the attempt on Kocur­ek. In mid-December, news broke that he foretold the effort to end Kocurek's life well before staking out a hiding spot near her home.

In May, Frances and Dan Keller – the former child care providers who spent 21 years (of a 48-year sentence) in prison for sexual assault of a minor before eventually getting freed when a doctor confessed to having provided a false testimony – were unanimously granted relief from the Texas Court of Criminal Appeals. However, the CCA declined to rule on their actual innocence, leaving pro bono attorney Keith Hampton with a daunting task: show proof of innocence for something that never happened. In June, a first plea to the CCA to grant the Kellers' innocence proved unsuccessful.

An early morning stop at the Omni Hotel for an airport run ended up ending Yellow Cab driver Conrado Contreras' life when he stepped into the path of 35-year-old Michael Holt and his rifle. Holt, who rented a desk at startup incubator Capital Factory, which takes up residence at the Omni, was shot and killed minutes later by police.

9) A Shortage of Death Juice

The recurring issue of the Texas Department of Criminal Justice running out of pentobarbital – a sedative TDCJ uses in conjunction with other drugs for executions – came to a head this year, as manufacturers continued to stop selling the drug to states that practice capital punishment. Not surprisingly, Texas officials found some more supply somewhere. Also not surprisingly, they've been tight-lipped on their source.

10) A Jaywalking to Remember

What should have been a simple detainment for jaywalking Downtown shortly after the bars closed on a Thursday evening in November quickly turned into a social-media scandal that reinforced beliefs that Downtown cops are too quick to get tough on casual ordinance offenders. Video from the arrest of Matthew Wallace, Jeremy King, and Lourdes Glen spread around the Internet through the weekend. None of the three ended up facing any charges.