The folks supporting transit rail for Austin are tiptoeing back onto the stump, hoping to put together some kind of a rail plan to succeed the voter-rejected Project Connect plan of November 2014. I applaud their chutzpah – the Chronicle editorial board went down in flames on that one, along with last year's City Council that had placed the rail plan on the ballot. The rail campaign coincided with the 10-1 campaign, during which all 11 successful Council candidates either opposed, or only limply endorsed, Proposition 1 – the transportation bond that included urban rail. Among the winning candidates, Mayor Steve Adler was perhaps its strongest "supporter" – and on the campaign trail, when he spoke of the project at all, it was to disdain the way it was being presented by the city and its Project Connect partners.

I recall that recent history to suggest the hill rail advocates must climb if they hope to persuade current Council members to reconsider, let alone to put another rail proposal before the voters in the near future. As I wrote in June of 2014 – when it was already clear that the Highland corridor plan was in trouble – the "progressive" opponents remained undaunted. "Some of those 'pro-transit' opponents insist it's simply a question of cheerfully defeating this plan, and then returning to the voters in a year or two for a railway to heaven along Guadalupe and Lamar. Considering the history of mass transit in Austin ... it hardly seems reasonable to presume that if we've spectacularly bungled it again this time, surely we'll get it right the next time, and soonest. That's one familiar definition of insanity." (See "Point Austin: Dis Connect," June 12, 2014.)

I'm returning to the subject 18 months later because some of those pro-transit opponents of Prop. 1 attended last week's Urban Transportation Commission meeting, to pitch a renewed vision for light rail. Scott Morris of the grandly named Central Austin Community Development Corpor­a­tion and Nathan Brigmon of the Civic Ana­lytics consultant firm presented their new draft proposal, running south from Rund­berg along the Lamar/Guadalupe corridor, across Lady Bird Lake at First Street, and heading over to Pleasant Valley, with potential extensions to the southeast and southwest. It's a pretty animation, and carries no price tag – all vision at no cost. Morris suggested that the city could begin by issuing certificates of obligation for initial engineering, and maybe work up to the project (and the voters) by degrees.

But Commissioner J.D. Gins immediately ran with the idea, hoping to persuade his colleagues to recommend a renewed city consideration of a comprehensive rail plan, based upon the Morris schematic or something similar. Unlike Morris, Gins had supported Prop. 1, and he argued the voters hadn't rejected rail, but the particular route and combined highway funding – an optimistic presumption. At first, Gins' colleagues seemed willing to support a recommendation to Council, but ... one suggested "high-capacity transit" (e.g., more buses) be substituted for "rail," and then another raised the issue of the "billions and billions" of dollars that such an ambitious plan reflected (the central public objection to last year's plan).

In the end, Gins withdrew his motion, acquiescing to the consensus that the matter needs more discussion, and that January is soon enough to take it up again. Later, Gins was undaunted, arguing that the conversation has begun to get things rolling: "I say let's reshape I-35 and build a high-capacity transit network," he told me. "We have to get serious about all these investments, even if we have to raise taxes, or our traffic will just continue to get worse."

For the present, I remain neutral but highly skeptical. Even in immediate practical terms, getting this unfinished proposal into a council committee, onto a (dubious) council agenda, over to the engineers and planners, and into some refined shape to return to this Council for an extended debate and then a possible November ballot measure – that all seems to me several bridges too far for 2016.

Gins concedes that if it can't be readied for a presidential election, with that critical mass of voters, then it should wait for 2020. The preceding unsuccessful light rail occasion (2000) took 14 years to rise from the dead – only to carry a much heavier tariff, and face an electorate bristling over spiking property values and their corollary property taxes. The train never left the station.

Commissioner Gins (who doubles as executive director of the Travis County Democratic Party) is familiar with long odds, and is determined to roll the boulder up the hill, once again. He asks, "Are we as a city going to do nothing and just wait 10 more years to try anything, or is the new council ready to have a real discussion, about how a big project like this can link the city together and get serious about infrastructure?"

I wish I could be sanguine about the likely answer. You can send your own to Commissioner Gins at bc-jonathan.gins@austintexas.gov. 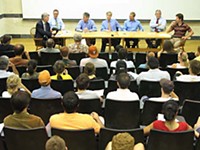