Council: Can You Uber to Your Short-Term Rental?

Council to Take Up STR and TNC Regs 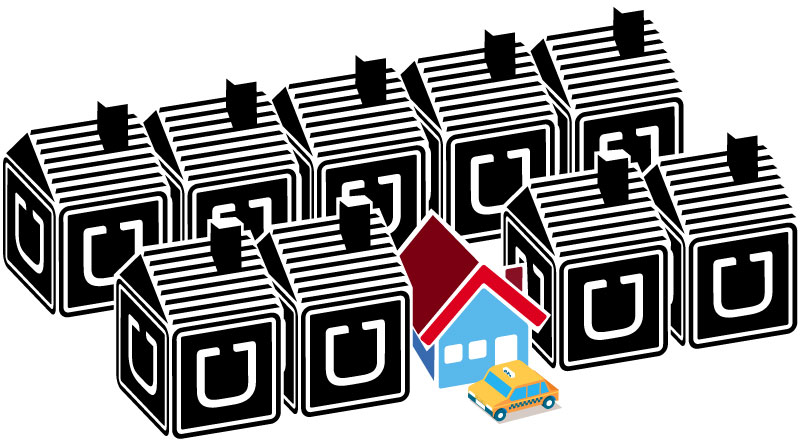 Today's City Council meeting (Dec. 17) could last 'til the New Year – or at least Christmas, since it's cleaning up postponed matters from an accumulation of weeks, and there will be plenty of material for ­public debate, dais oratory, and always-venerable tergiversation. Of the 100 Items on the agenda, the headliners are two: 1) the short-term rental regulations, postponed from last Thursday, Dec. 10; and 2) the transportation network company regulations, previously considered by Council, sent to the Mobility Committee, and now returning for final consideration and, presumably, passage.

The public hearing has already been held on TNC regs – any testimony will likely be limited – but the STR ordinance is subject to a full-bore hearing, and though the official momentum appears to be working against Type 2 (non-owner-occupied) STRs – the Planning Commission voted last week to phase them out even more quickly than Council proposes – there are plenty of folks likely to turn up to defend the practice and have their say. Nevertheless, it looks like they'll have to wait ­– Tuesday's work session consensus was to consider only the elimination of "testing the waters" advertising, and to postpone the rest to Jan. 28.

Last week's postponement was formally a response to Mayor Steve Adler's request (in his temporary absence) to wait until he returned. "I have concerns about splitting the ordinance up for action," the mayor wrote to his colleagues, "as this may cause confusion with the public and result in a fractured process and because the draft ordinance sections are very interconnected. Even if it were possible to handle noncontroversial issues separately ... it seems handling those later would not increase subsequent burden because such matters would be noncontroversial."

As we reported last week, the other changes under consideration include: regular inspections, limitations on clustering, septic inspections, sound and music limits, occupancy limits, and a "phase-out" of all Type 2 STRs by 2020. How avid the council opposition is remains unclear – five were willing to postpone the matter another six weeks (to late January), but in the end they endorsed today's date, with the option of another postponement. Whether that reflects only a heavy workload or some broader reluctance about the entire effort remains to be seen.

Meanwhile, regarding the TNC rules, matters will likely turn on whether Uber and Lyft will acquiesce to fingerprinting of their prospective drivers (along with other, less-disputed public safety regs), or continue to insist they can't work under those conditions – which will apply as well to the competition, the traditional cab and limo companies. Both sides cite public polling strongly supporting their opposing positions. (See below for more detail.)

Other Items that might get the gastric juices burning include:

• Mayor Adler's proactive proposal to authorize in advance about $309,000 in fee waivers and related expenses for next year's SXSW Festival (down about two-thirds from recent years). The event is co-sponsored by the city – the mayor has made a Facebook case on the huge economic impact to the city – and the waivers generally help to underwrite Festival-sponsored free-to-the-public events. But folks who either dislike the Festival or oppose any and all waivers will be heard.

• Speaking of fee waivers, several CMs are sponsoring a waiver of fees from SafePlace for a February fundraiser performance of The Vagina Monologues at the Dougherty Arts Center. It shouldn't raise much opposition, but it may be the historical first occurrence of "vagina" in a Council agenda.

• Likely to pass with some head-shaking on the dais is a contract for legal work by Renea Hicks to help defend the city from the campaign finance lawsuit filed by District 6 Council Member Don Zimmer­man. Presumably, Zimmerman will recuse himself from the vote, but it will be interesting to hear comments from either the audience or other CMs (more likely to bite their tongues for legal reasons). The trial, which commenced Monday, kept Zimmerman away from the work session.

• In the same general vein, the Audit & Finance Committee is bringing forward a resolution to tighten the rules on lobbying, and another that would require source disclosure of "dark money" – some of which found its way into last fall's mayoral campaign. With the modest fundraising limit (normally $350 from individuals), city campaigns are generally not drowning in cash, but the combination of independent money and personal fortunes in future mayoral campaigns is raising plenty of political alarms.

• Getting into those larger policy questions might take a while, what with the dozens of contracts piling up for late-year approval, and no checklist of which might draw additional CM scrutiny (a small army of departmental staff stand and wait each Thursday morning to learn if their pending contracts will draw the short straws).

After a full day (including music and proclamations), the big hearings will likely be evening events (with the over/under around 10pm). It's not exactly mixed martial arts, but features plenty of opinion-gouging, logic-chopping, and conspiracy-shadowing. Don't miss it if you can.