Time for a Change

After a decade of fighting for immigrant worker rights in Austin, Cristina Tzintzún is going national Tzintzún at her Workers Defense Project going away party on Nov. 14. (photo by Jana Birchum)

Across the street from the Governor's Mansion at the AFL-CIO headquarters Saturday, Nov. 21, a crowd of immigrants and their supporters massed, singing songs and listening to speeches. It was the successful culmination of Workers Defense Project's latest action, a three-day pilgrimage from the T. Don Hutto Residential Center in Taylor, Texas, to Downtown Austin, a 37-mile journey commemorating the year that's passed since President Obama announced his plans for sweeping immigration reform. Those plans have been stymied by a 26-state lawsuit led by Texas claiming the president's actions are an unconstitutional use of executive power. As the case makes its way through the courts, 750,000 undocumented immigrants who potentially would benefit from the reforms wait in limbo, a situation WDP and others find outrageous.

The protest was WDP's largest to date, but just one of the many ways the organization has attempted to creatively effect political change for its membership, which is composed almost entirely of immigrants. In the years between its founding in 2002 and now, WDP has released a study examining the construction industry in five Texas cities, won an ordinance ensuring rest breaks for Austin construction workers, fought for city financial incentives for development to be tied to higher labor standards, incubated a future City Council member (Greg Casar), and expanded its offices to Dallas, among other things.

Since its earliest days, outgoing Executive Director Cristina Tzintzún has been a part of WDP. Last month, Tzintzún departed for Washington, D.C., to work on building Latino political power at a national level, deciding that after over 10 years, it was time for a change. 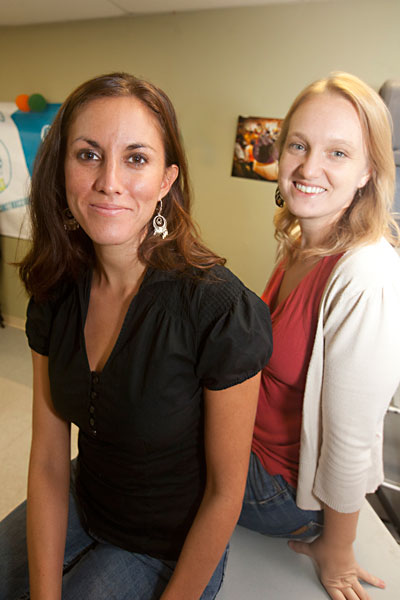 Tzintzún was 21 when she moved to Austin. She is originally from Ohio, the daughter of a Mexican mother and a white hippie father (they met while Tzintzún's father was living in a commune in Mexico). Growing up, her family was, Tzintzún says, "the only Mexican family I knew," and that "sometimes being able to pass [for white] really gave me an understanding about race, immigration status, and class that I think other people would miss ... I could see on a regular basis how differently my mother was treated than my father." By the time Tzintzún was in high school, Ohio's Latino immigrant population had grown, for two reasons: NAFTA had wreaked havoc on the Mexican economy, and coffee prices had dropped steeply, causing coffee growers to immigrate to the U.S. in search of better work.

Tzintzún spent three years after graduating high school working with immigrants in Ohio, and the communities they'd come from in Oaxaco, Mexico, but she had always wanted to move to Austin, partly because "my parents had told me that Austin was the greatest town for someone like me," and partly because the Latino community here was and still is larger and more vibrant than in Ohio.

When she came to Austin, she had no money, had not yet started college, and "didn't know a single soul in the city." At first, she stayed at a hostel near UT, cleaning rooms in exchange for a free bed. She began attending ACC (she later transferred to UT), working as a waitress to support herself, and "every other bit of time I had was dedicated to organizing immigrant workers ... there was no such thing as free time." She quickly found WDP, which at the time was about 6 months old and operating out of Casa Marianella, an emergency shelter for immigrants. The group began as a volunteer project educating workers about their rights and helping them navigate recovering unpaid wages. Tzintzún says it was "very, very grassroots." She remembers their first workers' rights training being held in Casa Marianella's backyard, and "we were trying to finish before the sun went down." All of their materials could fit into a single plastic box. Along with Tzintzún, Deputy Director Emily Timm has been with the organization since its start. Tzintzún says that because of their youth and inexperience, "Emily [Timm] and I were some of the least qualified people, on paper, to run Workers Defense," but "what I always relished was people underestimating our community, but also underestimating me and Emily because we were young and female. It made me work twice as hard to prove we could do it."

As the project progressed, WDP began to realize that legal assistance could only do so much for the people seeking it. "We started out as legal services, and we decided that legal services are important, but that what we wanted to do was shift how our economy and our political system worked to make sure those that were most directly impacted and that often sustained our economic and political system actually got to benefit from it," says Tzin­tzún. "We moved away from being a legal services organization into an organization that is grounded in organizing and development of grassroots leaders."

The Smartest Decision We Ever Made 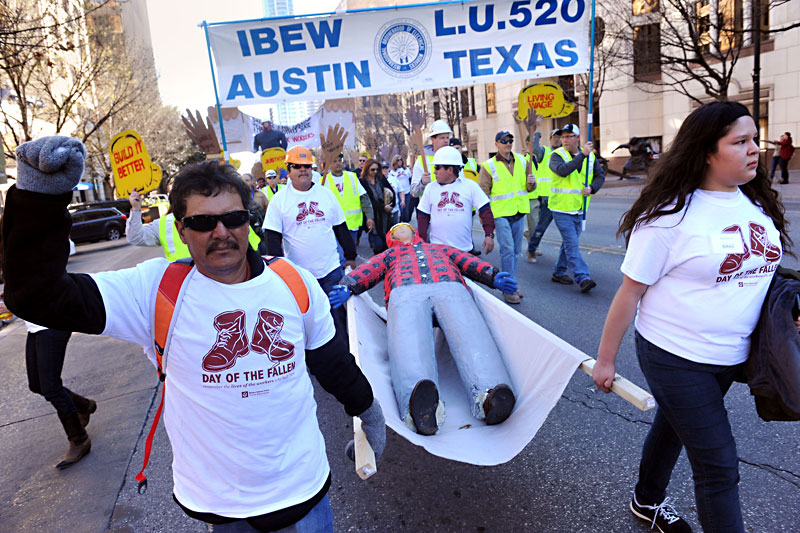 The Day of the Fallen march, Feb. 25 (photo by John Anderson)

The industry presents unique challenges to reformers. Each site is run by a general contractor who will usually then contract out portions of the project to subcontractors, who in turn may contract out portions of their portion to their own subs. This means that each site has multiple employers, making it difficult to hold a single entity accountable for labor violations on-site.

Because so many construction workers are undocumented, they're particularly vulnerable to labor abuses. In 2010, after doing a survey of 312 Austin workers and discovering that they were not being allowed to take breaks at work, despite working outside in the Texas heat, WDP embarked on a campaign for paid rest breaks and provided water for Austin construction workers, which resulted in the passage of a city ordinance. Then in 2011, the group created the Better Builder Program, a set of standards the group asks developers to agree to adhere to. For the most part, WDP has had success in tying the standards to city incentives. The program requires participants to agree to an $11/hour wage floor, to pay higher wages to skilled workers, to offer free safety training, to provide workers' comp, and – perhaps most importantly – to allow WDP on-site to monitor enforcement of the requirements. Tzintzún says that the Better Builder Program currently encompasses $800 million worth of projects and 8,500 workers. WDP's surveys of those workers indicate that a fourth received a higher wage than they had at their last job, 40% received safety training for the first time, and 35% were covered by workers' comp for the first time.

In 2012, WDP partnered with the Uni­ver­sity of Texas and the University of Illinois at Chicago to conduct a study of Texas' construction industry, published in 2013 as "Build a Better Texas." The study looked at "five of Texas' largest and fastest-growing cities: Austin, Dallas, Houston, San Antonio, and El Paso." The researchers discovered that one in five workers surveyed reported suffering a workplace injury requiring medical attention; that 60% of workers reported never receiving basic safety training; that 22% of workers reported not being paid at times; that 50% reported not receiving overtime pay, despite working overtime; that 41% were misclassified as independent contractors or paid off the books entirely; and that a majority had never heard of the Department of Labor's Wage and Hour Div­ision or the Texas Workforce Commission. WDP's candlelight vigil for immigrant families at the Governor's Mansion, May 19 (photo by John Anderson)

The same year WDP released the study, they expanded their offices to Dallas. Tzintzún says that WDP noticed when they would do work across the state, Dallas always seemed to have fewer organizations to partner with than the other large cities. Dallas has three times the construction industry workforce as Austin, but "it's a much tougher political climate." WDP is currently fighting for a Dallas rest break ordinance, but has encountered opposition. In July, a construction worker in Melissa, Texas, which is about 50 miles away from Dallas, died of heatstroke after asking to take a break and being denied by his employer. However, Dallas City Council Mem­ber Lee Kleinman has been dismissive of the need for an ordinance (Texas does not guarantee workers the right to paid breaks), notoriously remarking during a September Dallas council meeting, "Shouldn't we be dealing with, you know, loose dogs and stuff like that, and homeless encampments? There's plenty on the city's plate." Of the hesitance to embrace the idea of rest breaks, Tzintzún says, "I think that race and immigration status definitely plays a role in people being able to deny basic human dignity and rights to other people." At press time, the ordinance was set for a briefing during this week's meeting.

Texas' construction industry remains the country's deadliest. Tzintzún says that most of the workers have less than five years of experience in the industry; they take the jobs because they're what they can find in the U.S. "They risk everything to do what seems like a very basic job. They're literally dying at a pace that I think if we were talking about a different population and in a different state, there is no way people would be willing to turn such a blind eye."

Although WDP has made strides in changing policy in Austin, not everything has changed for the better. Tzintzún points to wage stagnation as a major cause of Austin's affordability crisis. WDP's Better Builder Program Director Bo Delp says, "It is our analysis that the construction industry has become worse for workers." Like Tzintzún, he says, "Wages have not kept pace with inflation or the cost of living in Austin. Moreover, companies who previously self-performed much of the work now subcontract their work out, leaving less opportunity for training that provided mobility to the construction workforce. This trend towards subcontracting has also created incentives for misclassification, which means workers are also increasingly asked to pay their employers' share of taxes."

Next year, WDP will expand their research, again in partnership with UT, looking for the first time outside of Texas, at what demographics suggest are the eight fastest-growing South­ern cities: Dallas, Hous­ton, El Paso, Atlanta, Miami, Orlando, New Orleans, and Raleigh. WDP plans to expand its offices to Hous­ton in 2017.

Tzintzún says of her time at WDP, "I look back and I'm really proud of the tangible things we've won for workers, but I'm most proud of the intangible .... When I had to tell our members I was quitting, I was crying, they were crying, and they told me, 'When we came to this country we honestly felt like no one cared about us and that we didn't matter. At Workers Defense Project, we learned not only that we matter, but that we're powerful and that we can make change.' And for me, it's like I always saw that in them and just got to reflect it back for the last 10 years."

Quote of the Week
Everyday fear in Trump's America