When it comes to elections, there's a difference between saying you're running, and actually running. With the filing deadline for the March 1, 2016, primary elections set for 6pm on Dec. 14, there's not long to go for candidates to prove they're really in it to win it.

Not that it's hard to run for the presidential nomination for either major party in Texas. While the elections are administered by the Secretary of State's office, the Republicans and Democrats set their own rules for ballot eligibility. On the GOP side, it's a pretty low bar: Cough up $5,000, or get a minimum of 300 signatures from each of at least 15 of the state's 36 Congressional districts.

Ever the party of the 10th Amendment and states' rights, the GOP lets those numbers vary from state to state. However, the Democrats have a single national standard for all states: $2,500, or 500 signatures. So far, two Democrats have filed their paperwork in Texas, and if you think you know who both of them are, you're probably wrong. As of Nov. 30, the only confirmed candidates are former U.S. Secretary of State Hillary Clinton, and Keith Judd.

Most candidates run on their policies or their achievements. Judd's campaign site actually reads more like a rap sheet, listing every lawsuit he lost and negative headline. A musician and self-declared former member of the Federation of Super Heroes, Judd's first run-in with presidential politics occurred in 1990, when he was detained by Secret Service personnel at an Al Gore event at the University of New Mexico. Since then, his political career has consisted of footnote runs for office in New Mexico, and he didn't even let a 2010 monthlong sentence for mailing threats to an ex-girlfriend stop him. His status as a felon has made the legality of his previous runs questionable at best, even in that handful of states where he made the ballot. But in 2012, he benefited from an anti-incumbent vote in the West Virginia Democratic primary, taking 40.65% of votes against Pres. Barack Obama.

That doesn't overshadow the fact there's still no sign of the great progressive alternative on the Democratic slate, Sen. Bernie Sanders, or of this cycle's seeming also-ran, former Mary­land Governor Martin O'Malley. The Republican slate has similar omissions. By the end of November, only four of the remaining 14 candidates – Florida's Sen. Marco Rubio, surgeon Ben Carson, professional self-promoter Donald Trump, and former Florida Governor Jeb Bush – had gotten their paperwork in. It seems extremely unlikely that Sen. Ted Cruz won't file in his home state, but that Dec. 14 deadline will become the great indicator of who in the field is still really serious about a national run.

As for third parties and independent candidates, no names have been touted yet. Both the Green Party of Texas and the Libertarian Party of Texas have ballot access, and have until that same Dec. 14 deadline to get someone, anyone, on the primary ballot. As for independent candidates, they can bypass the entire primary process, and gain access to the November election. The downside for them is that they can't even start collecting signatures until after the March 1 primary. They then must get the support of 79,939 registered voters who did not take part in the primaries, plus they must nominate 38 people to act as their electors for the national electoral college. Those criteria could be good news for the Republican Party. As it seems increasingly likely that frontrunner Trump may break his pact with the GOP and run as an independent if he doesn't secure the nomination, rustling up nearly 80,000 additional zealots by the May 9 cutoff could be tough work. That said, he could always just wait until July 23, and file as a write-in candidate. 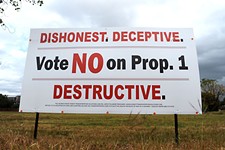