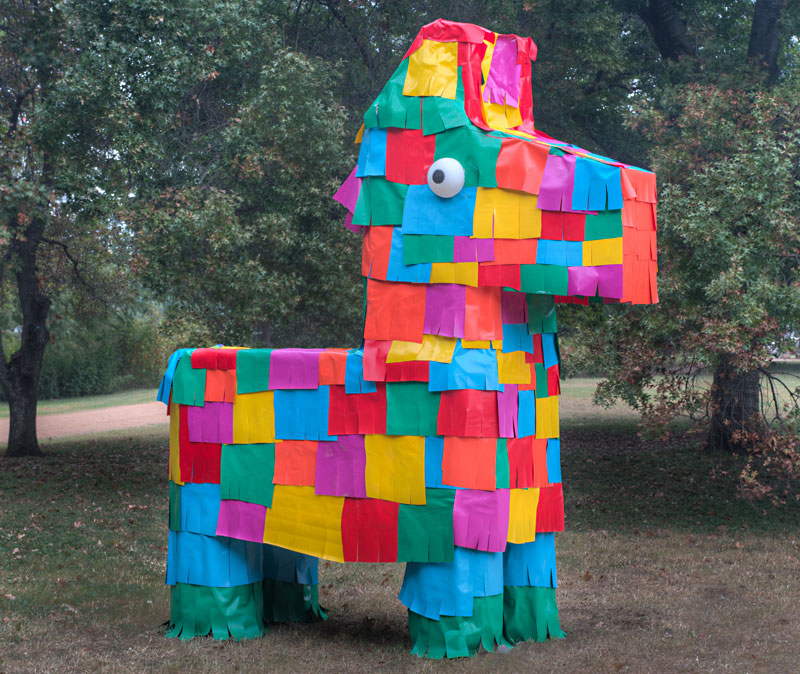 When local artist David Goujon read about the saga of the Jumpolin piñata store and its owners in East Austin – the party supply store that had been a neighborhood fixture before its unceremonious demolition by new property owners – he wanted to do something to express his feelings about the value of cultural diversity.

By mid-October, the full artistic expression of his sentiments was manifested: three outsized piñata-like creations shaped like burros, installed in the heart of the Eastside, a project aided by a commission from the city of Austin Arts in Public Places program. Reva Bhalla – Goujon's fiancée and business partner who helped coax his muse – described the project with palpable enthusiasm in an email.

"For the next two months at Edward Rendon Sr. Park, visitors will find three massive burro piñata statues hanging out near the waterfront on Austin's East Side," she wrote. "It's a whimsical site, but it carries a lot of meaning for us and the East Side community."

She went on to describe the galvanizing reaction to the iconic cultural symbols – staked firmly to the ground rather than hanging by a rope, each made of art materials mimicking the cardboard and papier mâché of actual piñatas: "Just during the installation this weekend," she wrote in an Oct. 18 email, "we were approached by so many amazing people that have been living in the neighborhood for decades and who got the message right away: They have a voice in Austin's growth story just as much as anyone else, and they want that voice to be heard."

A week later, the art installation was vandalized, and Bhalla's emailed update was decidedly grim: "Today, we learned that all three of the burros were knocked down. Tire marks and empty beer bottles near the site point to vandals. It's heartbreaking, but we are doing our best to get the funds to get a forklift and resurrect the burros."

The destruction was evocative of the artwork's inspiration. The dual destruction of Jumpolin and the artwork it inspired gives rise to the idea that – for all of Austin's talk of being a progressive city – the dreams of welcoming immigrants might not be totally embraced by all. One wonders, too, if there are other similar incidents of immigrant backlash that might go unreported.

A check with the Austin Police Department for statistics yields little insight. In response to the Chronicle's request for a tally, the APD's Hate Crimes Task Force produced a list of 14 confirmed hate crimes taking place from April 2014 to July 2015, only one of those "anti-Hispanic or Latino" – an assault with injury taking place April 30, 2014. The rest are categorized as to the personal identity of the victim: five anti-gay assaults of varying degrees; three anti-Islamic assaults; two anti-black; and one each anti-transgender, anti-lesbian, and anti-white.

A report from the city of Austin Commission on Immi­grant Affairs comes the closest to yielding an unvarnished snapshot of daily life for Austin immigrants. Unveiled at a Sept. 21 ceremony outside City Hall, the report reveals that 52% of its respondents categorize the city as "somewhat welcoming" – this in a city where one in every five residents is an immigrant.

The study noted the pervasive fear among many immigrants to report crimes within their communities, for fear of being questioned about their legal status. (Hence, perhaps, the APD's anemic hate crimes list.) The specter of Travis County Sheriff Greg Hamilton with his aggressive dictum to his rank-and-file to unquestionably honor detainers for Immigration and Customs Enforcement agents – regardless of the severity of offenders' crimes – has had a chilling effect on the reporting of crimes in some communities.

In the report, 16% of narrative responses described this fear. "Although Austin maintains a liberal façade," one respondent wrote, "the city continues to be segregated among racial and class lines. This is the prejudice that continues to thrive in our city." Another respondent further attests to the fear: "I have witnessed instances where ... the immigrant populations refrain from participating because of fear. As a community, we have failed to make them feel safe as we continue to demean and exclude them." (See "A Somewhat Welcoming City," Oct. 16.)

"This issue is really critical from a public safety standpoint," Travis County Judge Sarah Eckhardt told the Chronicle in a recent interview. "Our job at the county is to ensure the public safety of our residents; immigration status has nothing to do with that mission."

Amelia Ruiz Fischer, formerly an attorney with the Texas Civil Rights Project, said she regularly heard from potential clients of harassment. In one extreme case, an immigrant woman who had bought a plot of land to build her home was allegedly subjected to a constant series of threats and ethnic slurs – and even the brandishing of firearms in a threatening manner – from a neighbor who questioned her legal citizenship status (the case was eventually settled). A frustration for Ruiz Fischer during her three-year stint at the TCRP was to hear these stories from victims but not be able to take legal action.

"It has to be something actionable under the law," she said. "We got calls like that all the time in terms of people calling in to complain – of verbal harassment, threats to call immigration – which is very common. In that case, we had a property claim so it made it a case we could take to court. When it crossed into physical violence or property damage or interfering with someone's protected rights, then we had something that the courts could do."

The burros have since been reconstructed, just in time for the Nov. 14 Austin piñata picnic at Rendon Park. Meanwhile the Lejarazus, owners of Jumpolin, continue to look for a new site while preparing for their December trial against the property owners whom they allege demolished their business without adequate notice. "They tore down my store, they knocked down your burros, but they won't keep us down," Sergio Lejarazu – who knows a thing or two about rebuilding and starting over – told Goujon.

To be sure, the story of Jumpolin is an ongoing saga and by now a well-known anecdote of local lore. But stories of victimized immigrants – their wishes for an outcry silenced by overwhelming fear of deportation as they live in the shadows – well, those are the stories that may never be known.

Editor's Note: This story has been updated to clarify that the list of confirmed hate crimes requested from APD spanned from April 2014 to July 2015, and that the "anti-Hispanic or Latino" crime took place April 30, 2014. 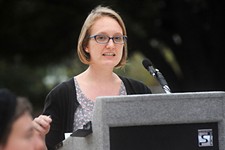 A Pilgrimage for Immigrants
Advocates for immigration reform plan a 35-mile pilgrimage from T. Don Hutto Residential Center to the Governor's Mansion