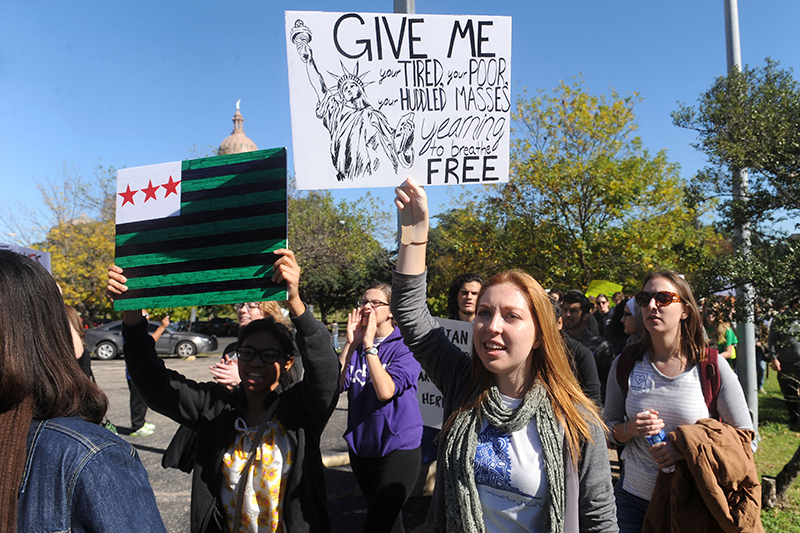 Writing in the Texas Tribune Nov. 20 ("Syrian refugees are welcome in Austin," TribTalk), Mayor Steve Adler cited the Emma Lazarus poem on the Statue of Liberty ("Send these, the homeless, tempest-tost to me, / I lift my lamp beside the golden door!") and said that he welcomes Syrian refugees to Austin "in a way that protects both our safety and values." Adler noted that state and local officials have no authority on refugees, but that Syrians are subjected to stringent security screening and that most of those few already admitted are women and children. He said he has joined more than 100 U.S. mayors in endorsing the statement by Cities United for Immigration Action: "Our hearts go out to the people of Paris and those impacted by these senseless acts of violence. The American values of freedom and opportunity define who we are as a country, and to extend that promise to Syrian families seeking refuge from the threat of terror is imperative. As municipal leaders, we seek always to protect our communities, while we honor the diversity and growth of our cities and counties. The United States has a robust screening and background check system that ensures our safety and security is protected, as we welcome those in need of refuge onto our shores." The mayor concluded: "I think it is important for me to lift Austin's lamp to the rest of the world. If America is to be a world leader – and Austin the shining city that it is – requires us to defend our values when it is hard – not just when it is easy."

Adler took part in a White House media conference call Monday afternoon, joining former Secretary of State Madeleine Albright, Deputy Secretary of Home­land Security Alejandro Mayorkas, and Detroit Mayor Mike Duggan in defense of the Obama Administra­tion's position on resettling Syrian refugees. Adler reiterated his welcome, calling it a "moral imperative" to help people fleeing "horrific conditions ... and facing what happened in Paris on a daily basis." He concluded, "We need to be governed not by fear, but by the principles that made this country proud."

An earlier version of this story appeared in Nov. 22's News Roundup.