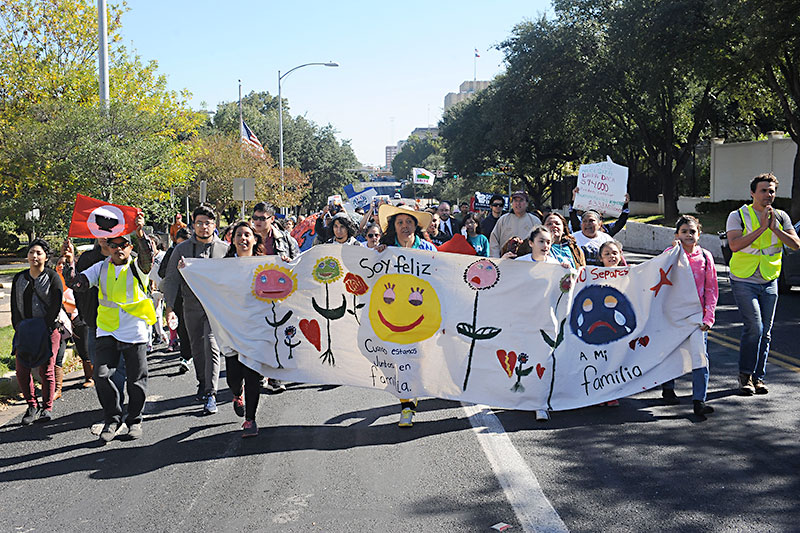 Workers Defense Project concluded a three-day pilgrimage from the T. Don Hutto Detention Center in Taylor, Texas, to the Governor's Mansion in Austin on Saturday, Nov. 21. The pilgrimage was in protest of the lawsuit filed by Texas and 26 other states to prevent President Obama's executive action on immigration reform from taking effect. (Photo by John Anderson)

City Council is heading into the stretch for 2015, with only two more regularly scheduled meetings before the end of the year, and a brief special-called meeting for Tuesday, Dec. 3, to consider the hiring of a consumer advocate for Austin Energy residential customers. See "Council: Choosing Sides."

The Texas State Board of Education rejected two proposals last week that help would ensure accuracy in textbooks – a measure requiring books get fact-checked by a panel of university professors and another that would make sure the majority of citizen book reviewers meet certain education and teaching experience criteria. Considering the right-wing stacked SBOE has come under fire for inaccurate and politicized portrayals of history, including slavery, the Civil War, and Islam, the rejection is a lost opportunity for much-needed improvement.

What goes up must come down cleanly: Last week Council adopted new limits on how much construction and demolition waste can go in the dump. Starting Oct. 1, 2016 for new construction over 5,000 square feet, and Oct. 1, 2019 for any commercial demolition, projects will be limited to 2.5 pounds per square foot, or must divert at least 50% of material to another use.

Austin Energy is undergoing a sudden shift in top management: A few days after general manager Larry Weis announced he would be resigning to accept the same position at Seattle City Light, chief operating officer Cheryl Mele (who had been considered a potential replacement for Weis) said she would be leaving after 24 years at the city to become COO for the Electric Reliability Council of Texas.

AISD can change the name of Robert E. Lee Elementary. On Nov. 23, the board of trustees amended its policy on naming campuses: This clears the way for Superintendent Paul Cruz to retitle any school if there is enough community pressure, starting with Lee.

Ted Cruz has become this month's designated challenger to GOP presidential front-runner Donald Trump, with the latest Quinnipiac poll having them in a statistical tie in Iowa (Trump 25%, Cruz 23%). However, Trump may have re-enforced his increasingly frightening radical rump after saying a Black Lives Matter protester at a recent campaign event deserved to be "roughed up."