PSC students have filed a formal complaint with the university 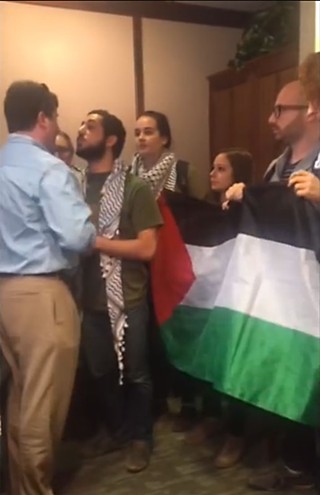 Twelve students of the Palestine Solidar­ity Committee at UT-Austin sought to deliver a two-minute statement at a public lecture on Israeli Defense Forces that was organized by the university's Institute for Israeli Studies last Friday to express their disapproval of the event, and planned to simply leave after making that statement.

But when Mohammed Nabulsi, PSC member and law student, started reading his pre-written statement from his cell phone, a graduate student attending the event pressed his body against Nabulsi's in an effort to stop him, as shown in a video that PSC has published on their Facebook page. "Do not touch me," Nabulsi said to the student. The graduate student then scaled up his efforts to stop Nabulsi by first snatching his cell phone, then ripping the Palestinian flag out of the hands of another PSC member.

Event organizer and UT government profes­sor Ami Pedahzur can be heard in the video yelling at PSC members, "You are students, you know nothing." As Nabulsi insisted on continuing his speech, event attendees insisted on stopping him – including Pedahzur who is seen at the end of the video also pressing his body against Nabulsi, nose-to-nose, while PSC members were shouting, "Free Palestine," and "Long live the Intifada."

After the incident, the 12 PSC students were detained for 40 minutes by UT police. One, who is a UT Middle Eastern studies graduate, was given a criminal trespass notice, which bans him from the entire UT campus. "He did not do anything except for hold the Palestinian flag," said Brian McGiverin, Austin Lawyers Guild attorney. "No reason was given to the student why he was penalized." PSC members have often presented statements during events without encountering problems, Nabulsi said. After the incident, the UT Dean of Students, Dr. Sonica Reagins-Lilly, reassured PSC members that they were acting within their rights.

After the event, Pedahzur released a statement about the incident on an official UT website – that was later removed – and on his website and Facebook page. In it, Pedahzur compared the incident with the latest Paris terrorist attacks, saying, "Less than 48 hours after the horrific attacks in Paris, I feel that it is my responsibility to ask you to join me in an attempt to confront the radicalization process on campuses and to protect students, staff, and faculty members from intimidation and violence."

"Drawing a connection between students' attempt to practice their First Amendment right through expressing their opinion about a political matter, such as the Israeli-Pales­tin­ian conflict, with what happened in Paris is outrageous and dangerous," McGiverin said.

After Pedahzur's statement, PSC members have been avoiding being on campus; some have "received multiple threatening messages and comments," according to McGiverin. "We are worried about our safety," Nabulsi explained, "since we were referred to as 'red flags for terrorism.' People take a professor's words seriously, so they might act on it."

In his statement, Pedahzur also accused students by name of extremism.

"It is the scariest thing for a Muslim to be labeled as a terrorist, especially in the anti-Muslim climate of Texas," said Nabulsi.

The group urged the university in a recent press release to conduct a full investigation of the events and Pedahzur's later statement on the university website, and to take the necessary steps to remedy the situation.

"The university has an obligation to protect students' freedom of expression and privacy, and against any racial discrimination," McGiv­erin said. PSC members have filed an official civil rights complaint with the university and are waiting for a response. "I am hopeful that UT treats this event with the gravity it deserves," said McGiverin. 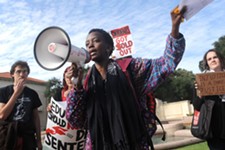