A Pilgrimage for Immigrants 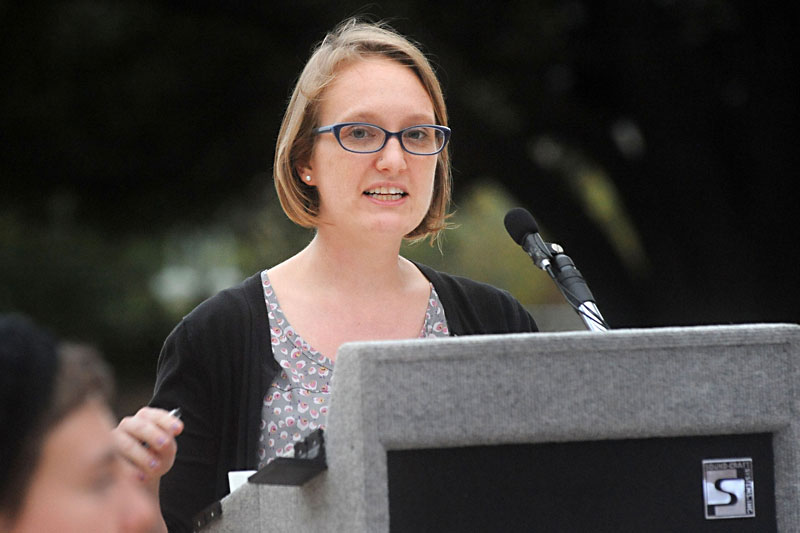 WDP's Emily Timm speaks about the pilgrimage at a Fight for $15 rally on Tuesday, Nov. 10. (Photo by John Anderson)

In their most ambitious demonstration to date calling for immigration reform, Workers Defense Project is poised this week to launch a 35-mile protest march from the T. Don Hutto Residential Center in Williamson County – a detention facility housing hundreds of asylum-seeking immigrant women and children – to the Governor's Mansion in Downtown Austin.

"We're asking the governor to do two things," explained WDP's Bo Delp. "Meet with the immigrant families he's hurting through his continued opposition to immigration reform, and drop that opposition. We want to send a clear message."

Gov. Greg Abbott has distinguished himself in opposition to immigration reform. As Attorney General, he filed a lawsuit last Dec­ember opposing an executive action taken by President Obama to protect some 5 million immigrants from deportation. Abbott scored a legal victory last week when the 5th U.S. Circuit Court of Appeals upheld a Texas judge's injunction against the president's immigration-related initiatives.

The privately run Hutto facility imprisons members of a diaspora – from Latin America, Africa, Europe, the Middle East, and other regions – seeking asylum, and is viewed as emblematic of the harshest conservative stance on immigration.

"What's important here, and what we're really trying to convey to Gov. Abbott and his allies that may oppose immigration reform, is that nearly 70 percent of Texas supports immigration reform," Delp said. "We want to make it clear that most Texans want Gov. Abbott to drop his opposition to reform and embrace our mothers, fathers, co-workers, and neighbors who live here and are being torn apart." Delp cited a 2013 survey of Texas residents conducted by Public Policy Polling where 68% of respondents categorized fixing the immigration system as "very important." Nearly the same percentage of survey respondents (48% of whom identified themselves as Republican) also indicated they supported a citizenship path for undocumented immigrants already here.

The upcoming march – which WDP calls a pilgrimage – will begin Thursday and conclude Saturday, with an estimated 5,000 people rallying at the Governor's Mansion. Among those marching will be members of the national and state chapters of the AFL-CIO, United We Dream, and Texas Organizing Project, Delp said. The entire organization has mobilized to make the march a reality, he said, including himself and other staff, such as Lead Organizer Rose Levy and Deputy Director Emily Timm, as well as WDP's members.

Virginia Badillo will be among the marchers. An immigrant from Guanajuato, Mexico, she's lived in Austin for about 12 years now, building a life with her landscaper husband and 4-year-old son. As the political climate has soured against immigrants, she recently lost the daycare job she held for three years when her boss was pressured to require Social Security cards as a condition of employment. Her son wants to visit Dis­ney­land, but she's unable to travel given another state initiative complicating undocumented immigrants' efforts to get driver's licenses.

"We're an honest, hardworking family," Badillo says in Spanish, while lamenting her lack of English fluency. The recent court decision against Obama's immigration reform further dispirited her, Badillo says. Still, she will march in a last-ditch effort to convince the governor to drop his opposition to immigration reform, hoping the throngs convince him to soften his stance: "We live on hope, and all we have left is faith," Badillo says.

Those wishing to participate in the final leg of the march are invited to meet at the WDP office at 5604 Manor Rd. at 9am this Satur­day, Nov. 21, to march the five miles to the Governor's Mansion at 1010 Colo­rado St. Or meet at the mansion at noon. More info at www.workersdefense.org.