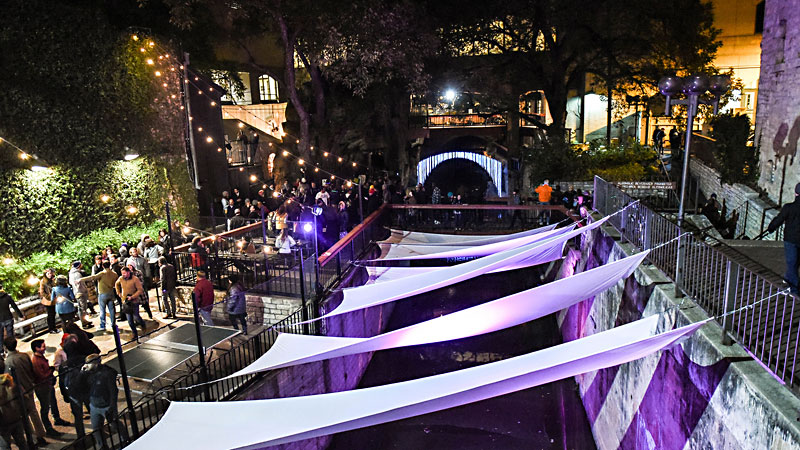 The show was conceived in 2013 as a strategy to keep the creek in the public's imagination during the interval between the design competition that took place in 2012 and the completion of the tunnel that would facilitate park construction. Waller Creek Conservancy president Melba Whatley, a proponent of involving local designers in the project, tapped Ingrid Spencer, then a contributing editor for Architectural Record, to devise the event. Spencer, who volunteers as the "Creek Show" director, decided on a series of creekside cultural programs that would showcase different art forms and continue after the parks are built.

The name – a play on "freak show" and the brainchild of Spencer's then-5-year-old son – is often accompanied by a rendering of the "creek monster," drawn by illustrator Marc Burckhardt. The bug-eyed monster represents the emergence of a new identity from the depths of the derelict creek. "The fact that this is a lost and abandoned place that's going to come alive and become something greater is part of what gives this project its intensity," says Spencer, now the executive director of the Austin chapter of the American Institute of Architects. "There's an element of the unknown."

While "Creek Show" is not by definition a light-based exhibition – future iterations might involve other visual arts, or dance – the popularity of last year's "Light Night" led organizers to embrace the same medium for a second year. (This year's works also have to endure the elements for 10 days – no small feat.) All five projects are by teams of local architects, landscape architects, and visual artists.

Volume, by Specht Harpman Architects, is a lighted waterfall that evokes the intensity of floods on the creek, pre-tunnel. An 80-foot-long trough suspended over the creek between Seventh and Eighth streets is filled with pumped-in creek water, which spills out in an illuminated curtain. At random intervals, two additional pumps overfill the trough to create a violent, floodlike deluge. An LED strip light embedded in the creek will turn on to enhance the effect.

"As we experienced [in late October], the creek can quickly transition from calm to ferocious in a matter of minutes," says Jakeb Novak, a member of the project team. "We're hoping to re-create an increased quantity of water but also some of the other senses that come along with that – the debris coming down the stream, the sound, the ferociousness of the event itself."

A block south, between Sixth and Seventh streets, visitors will encounter more than 200 empty neon-yellow inner tubes – suitable for languid trips down the Guadalupe – invisibly tethered together and bobbing on the creek. When bathed with black light at night, the tubes will appear to glow. Floating the Waller, by Ten Eyck Landscape Architects, is an ironic comment on the untapped potential of the creek. "The installation of the tubes is playing off the recreational aspects of waterways in Central Texas and the Hill Country," says Christine Skaglund, project manager on the design team. "We wanted to draw attention to this potential amenity that runs straight through Downtown, that people have turned their back on. The only ones who use it that way are the homeless."

Skaglund adds that, while working on the project, her team has gotten to know some people who bathe and wash their clothes in the creek, then hang them to dry on the walkway railings. "We want to encourage people to think about the quality of the water, too," she says. "In all likelihood our system will probably capture a lot of garbage in its netting, and we'd like people to not only enjoy the light show but understand that this is their creek and their garbage, too."

The show is funded through the Waller Creek Conservancy's programming budget and is free and open to the public (some related events, including a Nov. 17 artist talk, have a suggested donation).

After "Creek Show," the space will return to its underused state, Spencer says. "But for these 10 nights we're going to show the potential of Waller Creek."