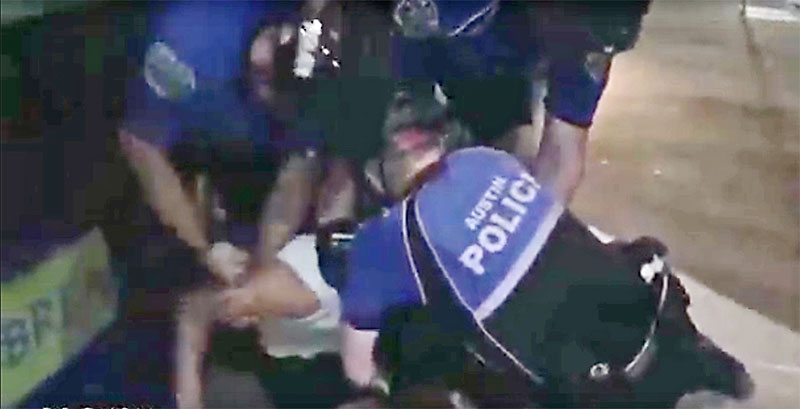 APD continues its internal investigation of the "incident that occurred Friday, Nov. 6 at 2:30am" on the 600 block of East Sixth Street, but it's not saying much more at this time. The "incident" – in which a team of Downtown officers used physical force in arresting three pedestrians who'd jaywalked across Sixth Street – came to the attention of department brass after a video taken by an acquaintance of those arrested made its way onto YouTube Friday morning.

The video, a 2:51-minute clip recorded by Rolando Ramiro, begins as two officers take hold of one of the pedestrians' bodies. A string of police come into the frame after that, each working to either detain one of the other two individuals or keep bystanders at bay. Footage shows officers intermittently striking the detained, forcing their arms into odd configurations, and wrestling them onto the ground. By the end of the clip there are at least 10 cops working to apprehend three individuals, none of whom shows any real sign of trying to evade arrest or fight back. The last thing you hear is one of those arrested shouting that he didn't do anything wrong.

Of the three arrested – San Antonio residents Jeremy King and Lourdes Glen, and their friend from Austin, Matthew Wallace – only Wallace faces any charges. All three were booked into Travis County Jail, though Glen and King were both allowed to leave shortly after 8am on Friday morning. King says he had his charges waived entirely. Glen received a citation for Crossing Against the Light – jaywalking.

Wallace was held in Travis County Jail until 9pm on Friday evening. He told the Chronicle that he learned from a magistrate judge within the facility that he faced charges for resisting his arrest. The degree to which he resisted remains in question, however: Wallace says no officer ever told him he was under arrest at any point before Ramiro began filming, and there's no mention of any arrest at the beginning of the video itself. However, three seconds into the clip, Wallace is seen being thrown up against a wall and wrestled – at times struck – by two officers outside of the El Sol y La Luna restaurant. The officers appear to wrestle Wallace into a crouching position and continue striking him before a third officer comes over and awkwardly attempts to pull his arms back behind his body – though it appears the attempts to do so are thwarted by the officer's own legs.

Wallace added that he did not learn that he was formally charged with jaywalking until he was released from jail on Friday evening. (One reason he was detained so long, he said, was because he had accrued a few outstanding traffic tickets; he was eventually released on time served for those tickets.) He has a day in court pending for the Class C misdemeanor.

Wallace acknowledges that he was jaywalking across Sixth Street. But he doesn't believe his actions warranted such a response from the officers, and questions whether he and his friends' decision to continue all the way across the street sparked the hostile reaction (it was only after they'd crossed the street halfway that they were told to stop by officers, and all three agreed that it would be smarter to finish their crossing than stop in the middle of the road).

"There was no conversation with the officers beforehand," he said. "We weren't asked to identify ourselves. That's how they approached us for the act of crossing without a signal." 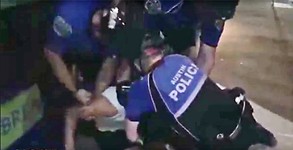