Mueller vs. TCAD: No Room for Affordability? 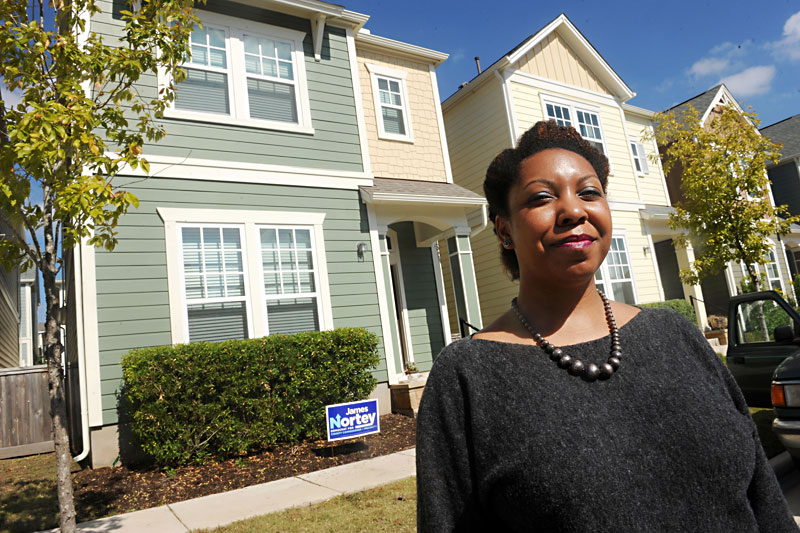 "I am happy that everybody got into one room for the first time, and that the board recognized it's not just about legal technicalities, but about people ... who are struggling to stay in Austin." Mueller neigh­bor­hood resident Janeka Rector spoke to the Travis Central Appraisal District board on Monday, in hopes of staying in her home. Last year, it was appraised at $179,000; for the coming year, unless TCAD reconsiders, it will be $378,000, although Rector, under her affordable housing agreement with the Mueller Foundation, could never realize that price. And the outcome of the dispute could jeopardize not only the Mueller program, but virtually every city of Austin affordable housing program.

As conceived by the city of Austin and implemented by the Catellus Development Corp. and the nonprofit Mueller Foun­da­tion, 25% of Mueller homes are reserved at "affordable" prices for qualified buyers (earning less than 80% of the median family income). That currently represents 290 homes, with another 300 planned at full build-out of the development. On the affordable housing stock – which is physically integrated into market-rate neighborhoods – resale values are limited to an annual appreciation of 2%. From 2007 until last year, say Foundation administrators, TCAD appraisers acknowledged that 2% ceiling as reflecting, for valuation purposes, the market-rate price.

But something shifted last year. Although a few affordable-home owners had occasionally seen higher valuations – normally lowered on direct appeal – in the most recent cycle, about 50 affordable homes were abruptly assessed at unrestricted, full market rates, some more than 100% above their previous appraisals – with 190 current homeowners under similar threat. Although the homestead exemption will limit each one-year tax hike to 10%, homeowners say the rising tax payments will quickly price them out of their homes. Homes that were originally appraised at $170,000, for example, were suddenly issued appraisals above $325,000. "Under these rising appraisals," Rector, a development specialist at UT-Austin, told the board, "my home will become unaffordable within five years."

Monday's board meeting was inconclusive. Prior to the meeting, board chair Dick Lavine told the Chronicle that while the board sets overall TCAD policy, it cannot directly intervene in appraisal matters, and Chief Appraiser Marya Crigler and her staff are responsible for acting in accord with state law. Moreover, there was no action item on the agenda – just the opportunity for homeowners, Foundation representatives, and other advocates to present their case and hope that some collaborative resolution could be found.

After more than two hours of discussion, that resolution did not seem appreciably closer. Speakers argued that the appraisal ground had shifted under the homeowners, endangering the entire Mueller affordable housing program. Advocates included state Rep. Celia Israel, Mueller Foundation Executive Director Patti Summerville, program consultant Kelly Weiss of Community Wheelhouse, and several attorneys representing either the Foundation or homeowners. Board members appeared sympathetic, but asked pointed questions about the design of the program, and particularly about the occasional release of some affordable homes "to the market" – of 51 homes in the original program since resold, 14 have been sold at market rates, although the "excess" income (above the 2% annual rate) goes not to the homeowner, but to the Foundation to reinvest in more affordable housing stock. Summerville explained that some homes are sold at market prices in order to maintain geographic distribution and a variety of home types throughout the development.

Some board members did seem troubled by an apparent TCAD standard that homeowners pay property taxes on market values that they cannot actually realize. Mike McKetta, an attorney speaking on behalf of three homeowners who have already had appeals denied by TCAD's Appraisal Review Board, insisted that existing state law requires appraisals to acknowledge all encumbrances on a property, including the covenants that limit Mueller homeowners' appreciation and give right of first refusal to the Foundation.

But in a brief closing statement, TCAD attorney Judith Hargrove responded that "TCAD is being blamed for a situation that the Mueller Foundation created in the way it established this program." She argued that because the Foundation has the ability to sell the houses at full market prices – as it has done in 14 instances – "the sales prices are not restricted." Since TCAD is required by law to appraise at market value, pricing all the homes, "affordable" or not, at actual market values is all the agency can do. "What they [the Mueller Foundation] have done to alleviate this problem," Har­grove said, "is to blame it on TCAD."

Hargrove couldn't explain why an appraisal policy that had accommodated the affordability limits for seven years had abruptly changed – speculating that home values had only recently begun to rise (a notion met with laughter from the audience). Her argument also left hanging in the air the question of one board member, Tom Buckle, about the market-rate resales: "The money doesn't go to the homeowner – why should the homeowner pay the taxes on it?"

Beyond the predicament of the individual Mueller homeowners, TCAD's position has cast a shadow over the Foundation's innovative affordability program, as well as on any "on-site" city of Austin affordable housing program. (Among the interested observers Monday was Mayor Pro Tem Kathie Tovo, who has long advocated such programs.)

Hargrove insisted that TCAD is willing to do "anything within its power to assist in this issue," but said the only available recourse appears to be legislative action. Israel asked that the board and Foundation not wait for nor rely on the Legislature. "Find a way to make it happen," Israel said. "Find a way to get to yes."