In response to the City Council adoption of a 10-district system, the Library has begun to maintain readership statistics by district, in order to provide those to Council and city leadership. For example, the system records three-week totals of items from the Central collection checked out, by district. For the three-week period from Sept. 14 to Oct. 4, there were 13,719 Central items that were checked out via district libraries, with the highest total in District 5: 2,940 items; the lowest, District 2: 439 items. 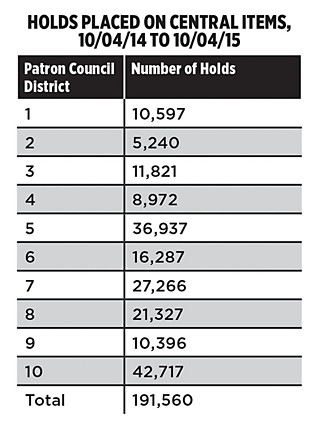 A broader reflection of the relationship between the Central Library and the branches is reflected in the number of Central items placed on hold by patrons from the various districts. The following chart reflects the totals from Oct. 4, 2014 to Oct. 4, 2015.