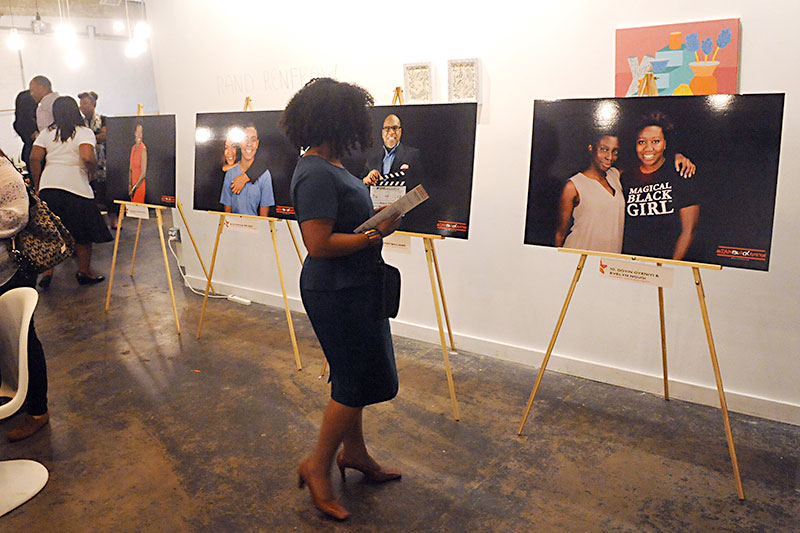 The Greater Austin Black Chamber of Commerce hosted a reception Tuesday, Oct. 27, at Wright Bros. Brew & Brew to unveil the next round of #IAMBLACKAUSTIN portraits, which are part of a social media campaign to unite black Austinites from all walks of life. Portraits include City Manager Marc Ott, poet Ebony Stewart, and DJ Hella Yella. (photo by John Anderson)

The Austin Parks and Recreation Department and the nonprofit Barton Springs Conservancy announced a partnership this week to supplement city funding for improvements to Barton Springs Pool. PARD has increasingly looked to private sources to help sustain the parks, and the Conservancy says it plans "to bring key Barton Springs stakeholders together on collaborative fundraising projects."

Early voting continues in the state constitutional and Travis County courthouse bond election, although the turnout is considerably less than inspiring: through Tuesday, a little over 16,000 voters (2.53% of registered voters), hoping to break 5% by Friday, Oct. 30. Election day is Nov. 3.

A class action lawsuit filed on Tuesday alleges that Austin's Municipal Court is unconstitutionally jailing impoverished people who can't pay the fines and fees associated with class-C misdemeanor charges. Class-C misdemeanors are the lowest possible civic fine; handed out for violations as ordinary as jaywalking or failing to wear a seatbelt, and to be punishable solely by fine. According to the lawsuit, July 2015 saw the Austin Municipal Court send 67 people to jail for such offenses.

Ammon Covino got arrested again. Covino, 42, with his brother and father, co-owned Northwest Austin's Austin Aquarium in 2013 before being sent to prison for one year for past exploits in Boise, Idaho, dealing in illegally procured wildlife. He was arrested this week for violating a probationary order that he not get involved in the shipping or exhibiting of any animals. Reports say federal authorities spotted his car outside of the Austin Aquarium earlier this week.