The FCC voted to drastically reduce the cost of phone calls made to inmates on Thursday. The new standards will reduce the cost of calls made to those incarcerated in prisons and jails around the country from roughly $20 for 20 minutes to no more than $1.65 for a 15-minute conversation, according to reports from the Associated Press. It's great news for those affected by incarceration – inmates and their loved ones – but an unwelcome change for people like Richard Smith, CEO of Securus Technologies, a video conferencing technology company that's profited in big ways from families that are often poor and needy. Smith called the decision a "colossal error" that threatens the financial stability of his company and suggested potential legal action in the future.

All told, it's been a string of tough luck lately for the Dallas-based company, which has taken hit after hit throughout the state of Texas since the passing of House Bill 549, a law that requires county jails to allow two 20-minute, in-person visits each week (and thus renders the need for phone calls less essential). Travis County commissioners voted to approve a measure earlier this month to re-implement in-person visitation at Travis County jails. The $707,000 approval came after a month of deliberations concerning whether or not the county was eligible for a grandfather clause allowing certain counties to not comply with the law (if they'd incurred significant costs implementing the systems in the first place). Ultimately, the Texas Commission on Jail Standards ruled that Travis County shouldn't be eligible for the waiver, because the county never paid for installation of the technology. Securus did, knowing that it would recoup a significant amount of money through a profit-sharing program of funds received through charges for inmate calls. But that now appears to be losing significance. At the very least, the amount of money they'll be making will be significantly smaller. Changes in costs are expected to go into effect in prisons in early 2016 and in jails by the middle of the year.

Media Watch
Are You Being Served? 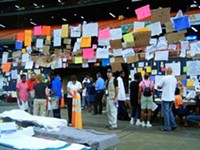 Katrina Aftermath Radio: A Brief, Dysfunctional Life
Attempts to set up a low-power FM for Astrodome residents killed by bureaucracy