No Birth Certificates, for Now 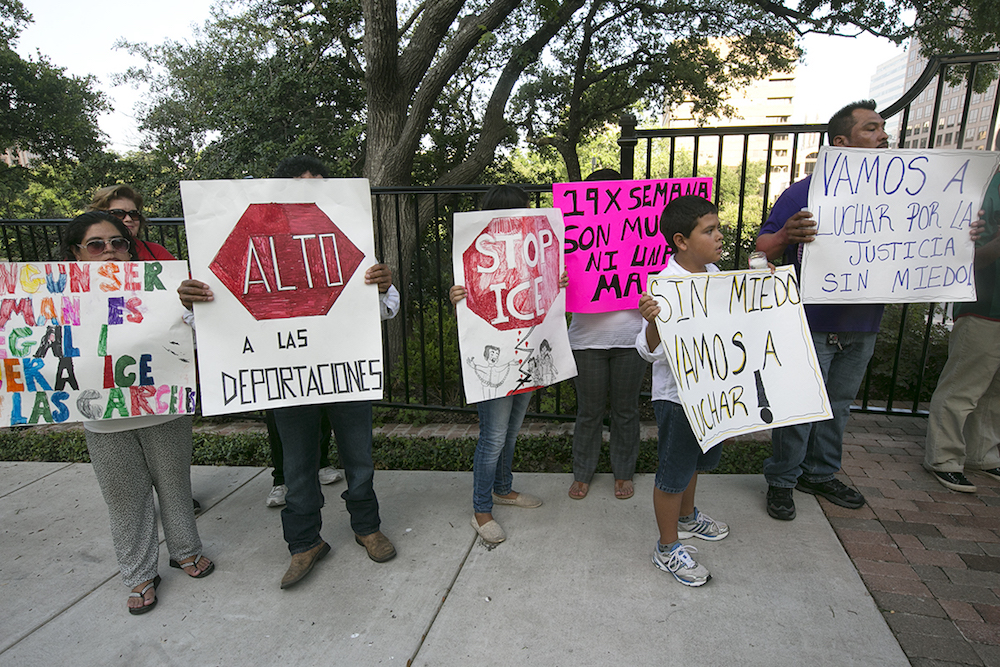 Protesters at an immigration rally (photo by Jana Birchum)

Immigration-averse state officials have rec- ently reassessed what they consider acceptable forms of identification from immigrant parents, spawning several lawsuits. Adding to already draconian measures in pursuit of a birth certificate, state officials accept a Mexican driver's license or Texas concealed weapons carry permit – the former requiring an immigrant's return to their country of origin, the latter an ID for which they're ineligible.

In the process, the long-sacrosanct 14th Amendment – guaranteeing citizenship for U.S.-born children, regardless of their parents' legal status – has been all but upended. "There's a clear war on immigration going on," said TCRP attorney Jim Harrington in a Monday interview.

Still, Harrington is buoyed by the judge's voiced empathy for immigrant parents. Plaintiffs – 28 families with 32 affected children – had conveyed their hardship, Pitman noted. But he still needed amplified evidence before a final ruling. "In summary, although the plaintiffs have provided evidence which raises grave concerns regarding the treatment of citizen children born to immigrant parents," Pitman said, "this case requires additional determinations which can be made only upon development and presentation of an evidentiary record which thoroughly explores the facts and circumstances of the issues raised in this case." Harrington derives hope from those words: "He's very troubled by this; he was pretty clear on that."

Yet in February, another immigration-related injunction – one preventing executive action by President Obama aimed at shielding some five million immigrants from deportation – was granted to a coalition of states led by Texas, preventing amplified Deferred Action for Childhood Arrivals (DACA) eligibility and the launch of the new Deferred Action for Parents of Americans and Lawful Perma­nent Residents (DAPA) program (see "Immi­grants' Future Uncertain," March 6). But the two injunctions are not analogous, Harrington said."In our case, there are a lot of issues of fact." And U.S. District Judge Andrew S. Hanen, who granted the earlier injunction, is widely known for issuing partisan rulings. So despite the setback on his own injunction quest, Harrington is optimistic of eventual victory and resumption of the formerly acceptable forms of ID: "They can try whatever they want," he said of state officials' ID machinations. "It doesn't mean they're going to prevail."