As anyone who contended with ACL traffic knows, this is Austin's season for festivals. Not to be outdone by film, music, comics, posters, or books, statewide news outlet the Texas Tribune will hold its fifth annual Texas Tribune Festival this weekend.

Located at UT-Austin (a conveniently short walk from the Capitol complex offices of legislators, or cab ride easily expensed for lobbyists), the three-day break for the Lone Star State's political class comes on one of those rare occasions when Texas politics is actually arguably marginally less fractionated and extreme than what's going in the nation's capital. To reinforce this, the local line-up is boosted by some national-level speakers. House Minority Leader Nancy Pelosi gets to evade D.C.'s summer madness, while U.S. Housing and Urban Development Sec­re­tary Julián Castro comes back to his home state.

11:10am: One on One With Joe Straus. Texas House Speaker Straus, aka the anti-John Boehner, explains how he keeps his job in the face of untrammeled hatred from his own party. (AT&T Center Grand Ballroom)

1:45pm: One on One With Nancy Pelosi. The former House Majority leader discusses the dysfunction in Congress, probably while silently glad that it didn't happen when she was in charge. (Hogg Auditorium)

4:25pm: Michael Williams One on One With Dan Rather. The Commissioner of Education faces the veteran reporter in a no-holds-barred discussion of what's happening in Texas classrooms and court rooms. (Student Activity Center South Ballroom)

4:25pm: Really, How Conservative Was the 84th Session? Texas' version of the Congress-wrecking Liberty Caucus (including hyper-right wingers Matt Rinaldi, Konni Burton, and Jonathan Stickland) explains how they didn't get their own way in a session where they got everything their own way. (AT&T Center Grand Ballroom)

Texas politics has often been accused of being a reasonable imitation of actual government. The conference highlighting it has also picked up a nickname, Trib Fest. The space between the two words is important, just so it doesn't get confused with Tribfest, the world's biggest tribute-band festival. But how do you make sure you've not got the two confused? 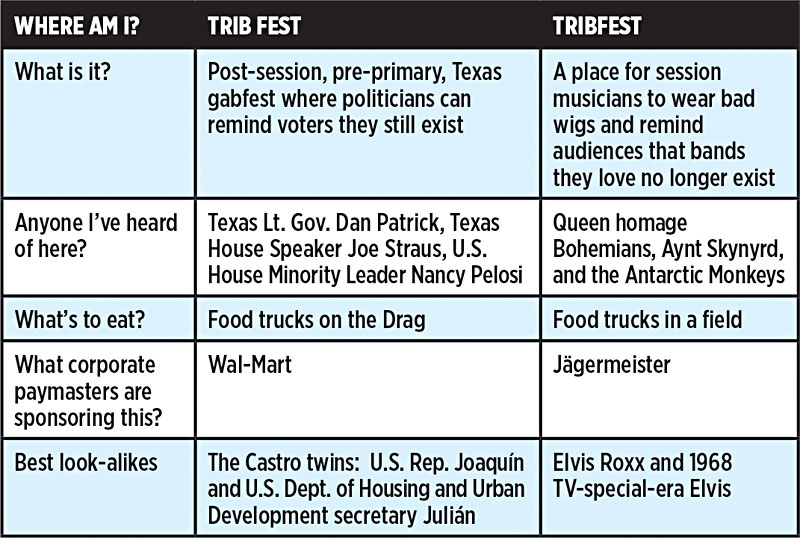 2019 Tribfest Takes Politics to the Streets
All eyes on Texas