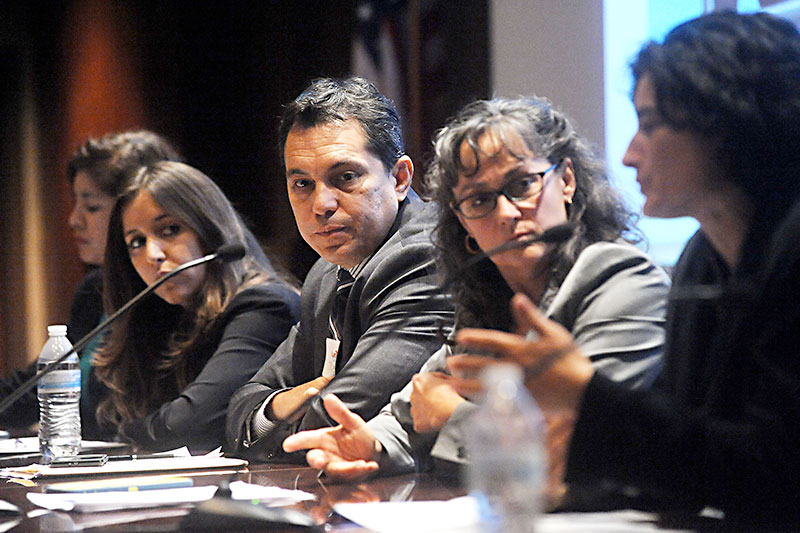 David Hinojosa of the Intercultural Development Research Association and Anne Dunkelberg of the Center for Public Policy Priorities discussed battles from the last legislative session at the 2015 Latino Summit. Other panels focused on collaborating with allies and crafting an agenda for next session. (Photo by John Anderson)

The Travis County Taxpayers Union joined District 6 Council Member Don Zimmerman in publicly opposing the Nov. 3 bond proposition for a new Civil & Family Courthouse Complex, arguing it's too expensive and should be built in East Austin (a previously unknown interest of the TCTU).

Zimmerman was cited Tuesday by the city's Ethics Review Commission for failing to file two required end-of-year campaign finance reports. The CM didn't appear before the commission, but his lawyer argued that the reports (although required by law) are not necessary. The commission issued a letter of reprimand.

Fifty-two UT psychology professors have signed a statement opposing campus carry, arguing "there is no empirical evidence whatsoever that the presence of concealed guns on campus will promote student safety, and ample reason to believe that it will lead to harm."

A Brazos County jury sentenced Gabriel Hall to death for the 2011 murder of 68-year-old Edwin Shaar. Hall, 22, is the first Texan to be sentenced to death in 2015.

Bad budget news: Comptroller Glenn Hegar forecasts the state will have less money to invest than expected for the 2016-17 biennium. His latest revenue estimate, released Oct. 13, drops the total from $113 billion during the legislative session to $110 billion now, mostly due to declining oil and gas receipts.

Lt. Gov. Dan Patrick set out his conservative agenda for the 2017 legislative session by releasing his interim charges to Senate committees. The list includes more charter schools, school vouchers, another Planned Parenthood fetal tissue witch hunt, and a study of "wrongful birth," whereby parents sue medical professionals for ­failing to inform them of their risks of having a congenitally ill child.