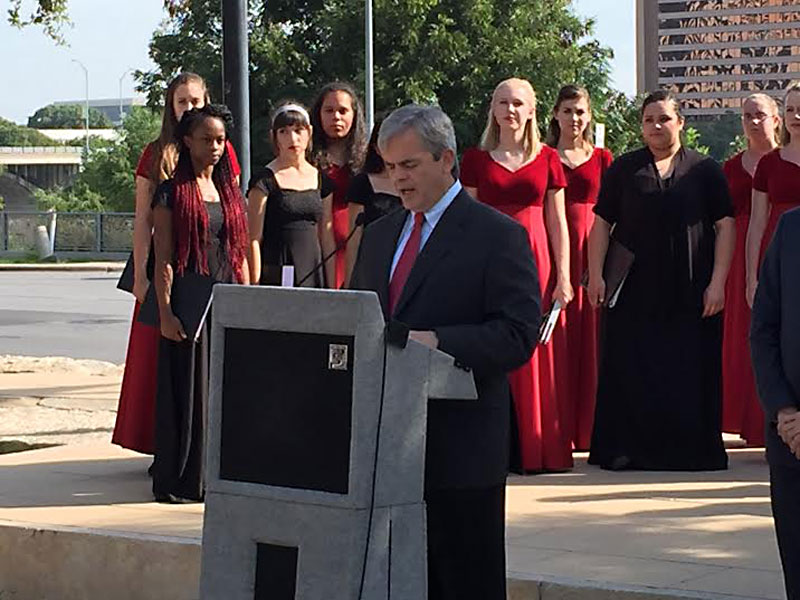 Mayor Steve Adler speaks at an event celebrating the International Day of Peace. (Courtesy of The City of Austin)

On Monday, Oct. 12, Mayor Steve Adler and Travis County Judge Sarah Eckhardt joined with members of Workers Defense Project to call on Gov. Greg Abbott to drop a lawsuit that seeks to prevent President Obama's executive action on immigration reform from taking effect. Both Eckhardt and Adler agree that fear of deportation is having a negative effect on Austin and Travis County residents.

The mayor's public show of support for immigration reform comes on the heels of a yearlong study by the city's Commission on Immigrant Affairs that was unveiled during a presentation outside City Hall on Sept. 21. The study comprised outreach to the public in the form of online surveys, focus groups, and individual interviews. While the theme of the day was peace through understanding – Adler noted the attributes of dignity and respect were necessary elements toward that status – not all respondents feel welcome.

In a city where one in every five residents is an immigrant, just over half – 52% – of respondents to a city survey find Austin to be "somewhat welcoming" to the foreign-born demographic, while another 16% find the city to be "not welcoming." The study – based on 766 responses from the public – was prompted after a 2013 municipal proclamation declaring Austin as "a welcoming city for international newcomers." The subsequent yearlong study was based on insights gathered from stakeholders in six categories: immigrant residents; members of the general public; service providers; businesses; philanthropic and public funders; and elected officials.

"It is always our pleasure to welcome visitors from all over the world," Adler said to a crowd of roughly 60 people gathered at the amphitheatre outside City Hall last month. "We need to remember the actions we take here can reverberate around the world."

The study highlighted nuanced responses from some immigrants who felt fearful given aggressive law enforcement steps to weed out undocumented immigrants – namely the former Secure Communities program practiced by the Travis County Sheriff's Office that assists Immigration and Customs Enforcement agents to round up the undocumented. S-Comm has since been replaced with the Priority Enforce­ment Program, designed to focus more on a criminal element, but some immigrant advocates report the rebooted initiative is just as aggressive in ensnaring immigrants (see "New Name, Same Game," July 10).

"Although Austin maintains a liberal facade, the city continues to be segregated among racial and class lines," the report reads. The main targets of such scrutiny were Mexican immigrants, according to the study. Focus groups yielded a number of challenges faced by immigrants, including accessing the Medical Access Program and its low-income eligibility ceiling requirements or medical care options in general as barriers to receiving health care. An inability to secure a Social Security number results in limited housing options for other immigrants.

While the focus of the gathering was on tolerance and peace – illustrated by a girls' choir singing John Lennon's "Imagine" as officials released white doves into the air – Austin's Commission on Immigrant Affairs Chair Angela-Jo Touza-Medina, who spearheaded the study, acknowledged there is still some progress that has to be achieved: "We have a lot of work to do," she told those gathered.

And the ceremony heralding the finished study was no mere Kumbaya moment. Touza-Medina said the study has substantive implications as it relates to the setting of policy, helping to inform elected officials in making decisions. "It has the value we give it," Touza-Medina said after the ceremony. "We would hope that the Austin Welcoming City Initiative would be a document of sorts, where it is not only used to educate, breed understanding and inform policy, but where it also breathes life into existing processes, systems, and policies leading us to self-reflect and evaluate how inclusive each of these is for Austin's foreign-born residents."

Also beyond the feel-good nature of the event, the report buttresses the city's vested interest in maintaining a welcoming environment for foreigners. Touza-Medina ticked off statistics supporting her point: Foreign-born individuals are more likely than U.S.-born residents to start their own business; 34% of all start-ups in Austin are founded by foreign-born entrepreneurs; as of 2011 (the most recent year for which statistics are available), 859 immigrants in Austin were so-called techpreneurs, ranking Austin No. 10 among U.S. cities.

"The report is a tool to be used towards reconsidering the standard we have for business-as-usual," Touza-Medina said. "To ensure that, as a community, we are more inclusive of and build upon the true diversity, cultural wealth, and economic prosperity of all of our residents – including the foreign-born."