Lakeview Residents Not Ready to Leave 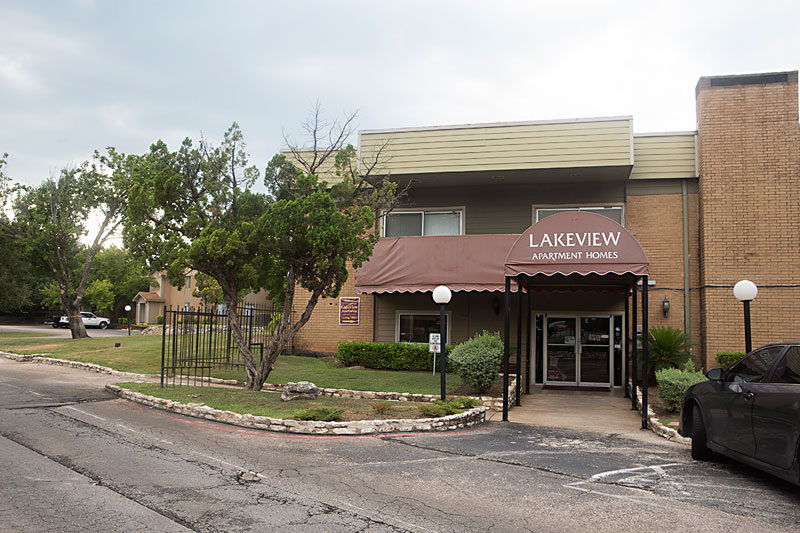 On Wednesday, Sept. 23, city officials approved a demolition permit to raze yet another low-income apartment complex, setting the stage for construction of more luxury housing along the trendy Riverside Drive corridor – but displacing some 100 families in the process.

At Lakeview, tenants were sent notices asking them to vacate the premises by the end of September. Among the displaced are 121 children whose parents now have to try to keep them enrolled in AISD schools as they scramble to find new homes. Seventy-two are at Metz Elementary, 21 at Martin Middle School, and 28 at Eastside Memor­ial High, according to district spokesman Jacob S. Barrett.

Before property owners applied for the plan exemption permit, tenants were notified of their plans, although they were not informed that they were in danger of having to leave before their leases were up: "The purpose of this letter is to inform you that the Lakeview Apartments are planned for demolition and management will not be renewing leases at the property," reads a June 26 letter.

By Aug. 4 – seven weeks before the Sept. 23 demo permit was approved – building owners seemed confident of ultimately securing permission to raze the structure, and they began to demand that residents leave before their leases were up: "This letter is to remind every resident here at Lakeview the official date we will be closing is Sept. 30, 2015. All residents must be out by this date. The property will no longer have water or electricity in our buildings."

The missives were largely effective. Most of the tenants at the complex – 224 units across 14 buildings – have left. But the 30 or so that remain – some of whom have leases that run until December – are anxious about their future, many unable to find alternative housing given the short notice to vacate.

Joel Jimenez is one such tenant. Along with his wife, Hortencia, and their 5-year-old daughter, he moved to the complex in May, lured by the cheap rent and relatively safe environs. He says he's tried finding another place for his family, but rents exceed the $636 per month he's been paying for the one-bedroom unit at Lakeview. "We've been putting in applications," Jim­enez, a Mexican immigrant, says in Span­ish. "The cheapest rent we've found was $790 for a one-bedroom, and others go for $800 or $900." Making matters worse is his lack of credit history, which results in apartment managers requiring an extra deposit. "We don't ask for much," he says, "just a little bit of time to find another place to establish ourselves."

But tenants aren't getting answers. The property managers have refused to answer any questions, including those from the Chronicle. Cypress' office did not return calls. Last week, District 4 Council Member Greg Casar, District 3 CM Pio Renteria, and other officials arrived at the complex on behalf of tenants, only to be asked to leave the premises under threat of police being called to the scene, according to Casar's office. Robert Doggett, a lawyer at Texas RioGrande Legal Aid who's assisting tenants, confirmed the report.

Remaining tenants insist their issues have not been addressed. Faced with the information blackout, they headed en masse this past Saturday to the home of M. Timothy Clark – listed as president of the limited partnership that was awarded the demo permit – who lives in West Austin. No one answered the knock on the door at Clark's home; still, Doggett says the tenants had sent a powerful message: "These residents know where [company officials] live, and they need to reach out instead of hiding behind their corporate names," he said. "I think they know we're serious and want a resolution."

Jeff Blue, president of JBlue Real Estate Services, responded with a statement Tuesday: "JBlue Real Estate Services, the management company for Lakeview Apartments, began notifying residents in June that they would need to vacate by September 30, 2015. Leases on property have a clause acknowledging that tenants would need to relocate when notified. It was a condition of every lease, and the vast majority of residents have already relocated. However, management understands that there are some residents that have not yet found housing and need more time. Any resident that has an existing lease past September 30 will be allowed to stay through the duration of their lease should they choose. Any resident that is on month-to-month or that terminates on September 30 can contact management so that we can work with them."

Doggett remains skeptical about the company's assertions of honoring existing leases beyond tomorrow. He and his colleagues report that washers and dryers are being removed. Casar said he hopes to revisit the concept of establishing a sound municipal tenant relocation policy designed to provide displaced tenants with a range of resources and assistance – an issue last explored in 2013 but never implemented. Renteria, whose district encompasses 5,000 affordable housing units – the most in the city – is also keen on the idea. Any action would come too late for Lakeview tenants, but would at least yield safeguards for future displacements. "There's definitely a bias against low-income housing," Renteria says. "It's a sad situation; it's really heartbreaking."

Alberto Martinez, chair of the East Cesar Chavez Neighborhood Planning Team, sees the Lakeview tenant exodus as another example of gentrification – just the latest illustration, to his mind, of a preference for affluent tenants over the low-income residents who've long called the place home. As Austin's once largely Latino working-class enclaves become increasingly appealing to commercial developers, the longtime inhabitants of the prized land are seen as obstacles. "It's an assault on the culture," he says. "To me, it's a cultural cleansing, which is worse than gentrification."

Martinez has seen it before. He witnessed tenant displacement four years ago at the nearby Shoreline Apartments, a 308-unit complex demolished to build a multimillion-dollar, mixed-use project proximate to Lady Bird Lake. He saw it again at the Vista Lago complex, which was also razed to make way for higher-end rental housing.

One needn't go further than the city's various visions for suddenly fashionable neighborhoods – including the East Riverside Master Plan drafted by city officials in 2010 – to confirm his sense of a bias toward commercial developers in the gentrifying city, Martinez says.

"The city's corridor vision is of people being able to walk to the local businesses they would patronize," he says. "This is what they're doing now; they just want different people doing it. The culture there now is largely Latino and poor, and it's not good enough."