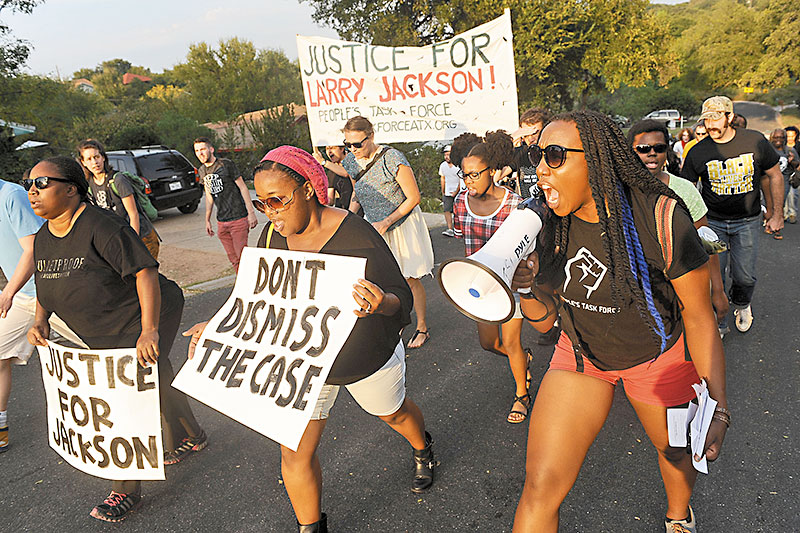 Protesters, including Jackson's sister and niece, march from Givens Park through the surrounding neighborhood to ask for justice in the death of Larry Jackson Jr., who was killed by former APD Detective Charles Kleinert in 2013. Jackson's wife filed a $250,000 lawsuit against the city of Austin in June. (Photo by John Anderson)

Whole Foods announced this week it is laying off 1,500 workers ("Team Members") in "back-room" positions (1.6% of the 91,000-person workforce) in order to invest in "lower prices, marketing, and technology." The company still plans to expand by 40 stores annually and open a cheaper "365 by Whole Foods Market" next spring. Whole Foods' stock price has declined 35% this year.

Hearings began Wednesday before federal Judge Lee Yeakel to determine whether enough evidence exists to grant immunity to former APD detective Charles Kleinert in the July 2013 shooting death of Larry Jackson. Kleinert, who successfully moved his case from district to federal court this year, believes his case should be dismissed because he was serving as a federal agent at the time of Jackson's death. Yeakel is expected to issue a decision sometime within the next few weeks.

The city's Public Safety Committee took testimony on Monday regarding the implementation of police body cameras, marking the first such discussion held on the issue after the budget's passing in mid-September reserved roughly $3 million for the new technology. For more, see "Bringing Body Cameras Into Focus," Sept. 29.

Yasmin Wagner is the new AISD trustee for District 7, the seat left vacant by the death earlier this year of Trustee Robert Schneider. She was appointed by the board, beating out the sole other applicant, Dale Sump, and will serve until the seat is on the Nov. 2016 ballot. See "Wagner Joins Austin ISD Board," Sept. 29, for more.

Travis County Democratic Party Chair Jan Soifer is resigning after just over two years in the post to run for district judge. Her interim successor will be selected by the County Executive Com­mit­tee as the Chronicle goes to press, with a permanent replacement to be elected in the Democratic primary next March.

The next phase of the Universal Recycling Ordinance goes into effect today (Oct. 1). The rule requires that multifamily properties with at least 10 units, and commercial properties of 25,000 square feet or more, offer recycling collection. That recycling container needs to be within 25 feet of the Dumpster, making recycling as convenient for residents or customers as throwing things away. See "Getting to Zero," Nov. 14, 2014. ... The city is hosting a series of free training sessions regarding compliance questions; see "Public Notice."