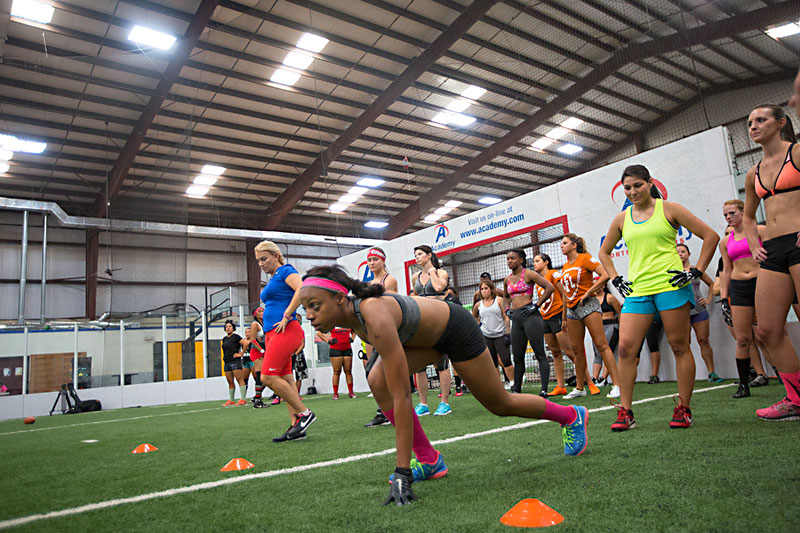 In the early afternoon at an indoor soccer facility in South Austin, people are gathered in and around the metal benches that run along the field. An older man in a burnt-orange jersey that reads "LFL" across the front is checking women in, giving each a number which he writes in permanent marker on their arms. Forty-seven women have shown up, all looking to earn a spot on the roster of the city's newest women's tackle football team, the Austin Acoustics.

Part of the Legends Football League (LFL), which is better known by its previous name, the Lingerie Football League, the Acoustics were only announced a week before this open tryout last Saturday, and word about the tryouts spread almost exclusively through social media. Mitch Mortaza, the founder of the LFL and managing partner, has flown in from Los Angeles to oversee the tryouts. He is being assisted by a crew of men from a local Austin training facility, DeFranco's Gym at the Onnit Academy.

The LFL is seven-on-seven tackle football, a high-speed version of the sport people see on TV. Players have to play both sides of the ball and often a variety of positions. LFL's season begins in April, when the Acoustics make their debut. Mortaza says he expects 6,000-7,000 fans in the stands, which would be near capacity for the Cedar Park Center.

The soccer facility is buzzing with noise and energy. Some women are in cleats, others in simple sneakers. One woman has black grease under her eyes; another, a Texas-themed headband holds back her hair. They've come from as far as Houston and Arlington, some with extensive semi-pro experience in the existing women's football leagues in the state. Unlike those leagues and teams, the LFL has a TV deal (FUSE airs taped games on Saturday evenings) and people can pay into a YouTube subscription service to watch online.

The LFL is perhaps most famous, though, for its uniforms. The women wear bikinis that accentuate their cleavage, with their shoulders protected by pads and their heads by helmets. It is no exaggeration, though, to say most of their uniform is their exposed skin. Yet that aspect is not even mentioned at this tryout. Mortaza and the men from DeFranco's are there to see what these women can do on the field.

The women who play on the teams are not financially compensated for their play, though they will have to find time to get and stay in shape, participate in organized team activities, and attend both a minicamp and training camp in the spring. Mortaza tells them, "everyone is going to have to make a sacrifice" in order to play. Everyone here is ready, their dedication tied to their love of the sport.

Cherita Pipkin, a 26-year-old from Arling­ton, has only ever played co-ed flag football, never any form of tackle. She explains why she hopes to play safety or wide receiver: "I'm good at catching and I'm good at breaking, cutting sharp corners." Pipkin says simply of the distance between Arlington and Austin, "it's going to be some changes but it's something I'm willing to do, because I love football."

The tryouts are two hours of football drills. Each woman does a 40-yard dash and has her time recorded. They locate who has the best throwing arms and who is able and willing to full-body tackle a tall, cylindrical pad. The women practice footwork drills, catching the ball and plowing through a defender, and doing the moves necessary to get through an offensive line to sack the quarterback. Some women talk to each other about technique when a new drill is announced, those with knowledge teaching those who have never before played football. Through it all, the women cheer each other on. Shouts of "Let's go, San Antonio!" "Get it, girl!" and "There we go!" are accompanied by clapping.

At the end of the day, Mortaza announces 19 names of women who have made the roster, temporarily at least. They hug one another, smiles across their faces. The final roster will be made of 20 women, pulled from both open tryouts (the next scheduled tentatively for January) as well as private ones, if necessary. Pipkin has made it, for now. The 19 will have a head start on whoever else will try out. They have access to the crew at DeFranco's as well as one another.

Pipkin, who has never played a down of tackle football, and who at first cannot find words because of her excitement, says that she started the day "so nervous about how good I'd do." Now, making the roster, it's "going to make me work harder and harder." Still, there are seven months to go before the Acoustics take the field for the first time. The journey has just begun for these 19 players, none of whom are guaranteed to be there on starting day. 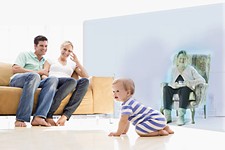 Too Soon?
We grade some of SXSW Interactive's boldest tech