When the distinctive blue-and-white livery of vehicle-sharing service Car2Go arrived in Austin in 2010, they were a novelty. Now they're a regular sight on local roads. But on their fifth anniversary, the firm is revamping its provision, adding more cars while redesigning its service map with extra focus on Downtown commuters.

It's a simple system: A subscriber electronically checks out any of the two-seater cars, drives it where they need to go, and leaves it there for other users to pick up later. Austin had similar services before, but Car2Go came backed by the commercial might of German car company Daimler AG. Originally the location of the firm's test program, Austin is now one of its biggest markets, and home to its North American operations and General Manager James Emery, recently here from Car2Go's office in Calgary, Canada. While that sprawling, mountain-shadowed, oil and cattle city may not sound like ideal car-sharing territory, he called it "one of our thriving markets, up there with Seattle, Vancouver, and Brook­lyn." With 80,000 members compared to Austin's 55,000, it's actually even bigger than Texas' progressive capital. But there are many similarities, especially in who the users are. Half of all clients are under 35, Emery said, "and I think that speaks to the kind of service that we offer, for that multimodal approach for people that don't have a car, want to go carless, or are maybe a one-car family."

In part, Emery sees a generational change, with strong uptake in university areas. In Austin, the firm even adds specific drop-off points for student-friendly events like UT Football, ACL, and SXSW. That makes UT music education student Maddy Braat a perfect customer: A Dallas native, she had a car before moving to Austin, but her parents sold it and bought her a Car2Go membership instead. In her freshman year, she depended on her car-owning roommate, but since her sophomore year, she's increasingly used the service to supplement her bus use, especially for one-way trips. She said, "That's the best part, that I can take it anywhere and just leave it without worrying about parking spots." The other big advantage is cost: at around $2 to $5 for her average trip, she said, "It's cheaper than car insurance."

However, the downside for Car2Go is that the student population is only in town for around half the year. According to Emery, summer is the lowest season for usage, but that's more because of the weather and vacations than empty campuses. He says the customer base is diverse enough that "even if (students) leave and stop using the service, other people pick up using it." That includes the increasing number of hotel occupants Downtown, since Car2Go's roaming memberships allow users in one city to use cars in any other city.

However, that concentration on certain areas has resulted in a big shake-up. While touting its successes, Car2Go has actually shrunk its service map. This is the second time the map has shifted, having expanded in 2011; yet this new service area is actually smaller than ever before, pulling back within the 2010 boundaries. Drivers can go beyond its borders, but since they can't drop a car off outside the home area, the meter keeps running and the bill keeps rising until they bring it back inside that zone.

Internationally, Car2Go is expanding, with offices in 29 cities in eight countries, and Honolulu and Chongqing, China, scheduled to come online this year. Yet not every market has been successful. For example, in June this year, the firm suspended operations in Eugene, Ore., because of lack of demand. Cars were sitting idle, often used once per day, as compared to five times a day in nearby Port­land. Emery says that's been the situation in parts, though not all, of Austin. Total demand has actually been so high that the fleet just expanded by 100 vehicles, but the fringes of the map haven't been paying their way. At the same time, Emery said, users in the city center were left carless at peak times: "Basically, when they wanted to use us, we weren't there." Moreover, the new map more accurately reflects the environment for which the Car2Go vehicle is designed. He said, "They're engineered for the inner city, for the stop-go, stop-go."

While the redesigned map helps the core, it will be less convenient for many residents at a time when Car2Go, Uber, Lyft, and of course Capital Metro, should make not having a car a real option in more parts of Austin. It's a slow change: Realtor Debbie Barrera said that Austinites are "slaves to our cars, so when you try to use alternative transportation, people go, 'What's that?'" However, with changing demographics, and people moving here from more transit-savvy cities, there's more demand for those alternatives. She's even seen people pick homes because of Car2Go, with one recent customer with a job Downtown moving to the 78702 ZIP code specifically because it's a part of East Austin within that service zone. The question now is whether these redesigned borders will still suit his needs, as the new map becomes a test of how far people will go to find a car.

That pressure could erode the subscriber base, which already faces competition from Uber and Lyft. While Car2Go works directly with the Austin Transportation Department on issues like parking, the rideshare services have had a much more contentious relationship with the city, and they could be primed to take advantage of this reduced service map. However, Emery argued that such firms are less competition for Car2Go, and instead help further erode the appeal of car ownership. He said, "We're all part of this bigger pie of getting people out of vehicles, and the more options they have, the more willing they are to get rid of the car." 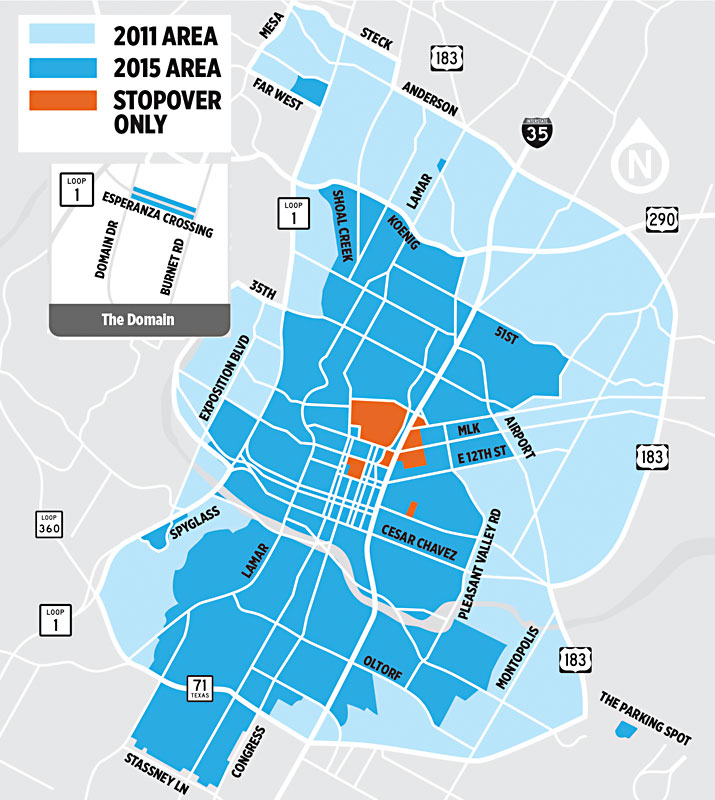 Car2Go's new service area (dark blue on map), now in effect, concentrates its vehicles Downtown, shrinking its service zone from the previous one, which had been in effect since 2011. Drivers may travel outside the service area's borders, but may not end their trip outside of it. 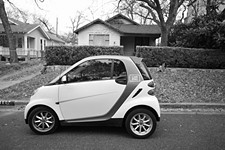