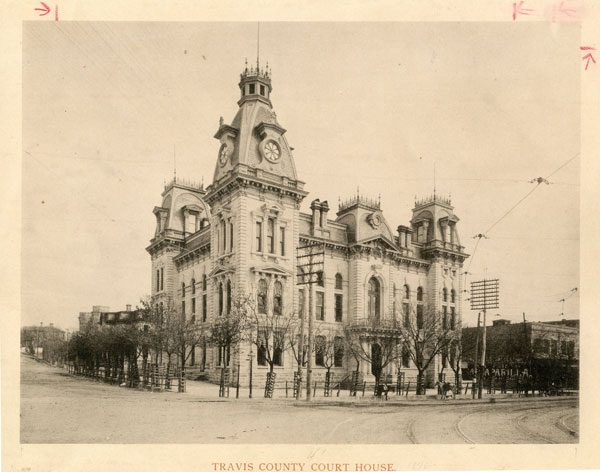 The Heman Marion Sweatt Courthouse at 10th and Guadalupe is the third Travis County courthouse. According to the county archives, temporary and unofficial courthouse quarters were first replaced in 1855 by a two-story stone structure at Fourth and Guadalupe streets (the proposed site of the new Civil & Family Courts Complex) – a location sufficiently off the beaten path that residents considered it inconvenient. It served until 1876, when a new courthouse was erected (the original building was put to other county uses until its 1906 demolition).

The 1876 courthouse was built on the southwest corner of 11th and Con­gress, across from the state Capitol (built in 1887, opened in 1888), on land leased from the state, which would complicate its eventual replacement. The archives describe the courthouse as "a three-story limestone building, [and] a breathtaking example of 'Second Empire' architecture ... resplendent with ironwork cresting, decorative dormers, and Mansard roofs." Like its predecessor, in addition to county offices and courtrooms, it also contained jury quarters and a jail, as well as a gallows for the occasional execution – according to newspaper reports, a humanitarian improvement over the previous site, which was, according to a former deputy sheriff, "on the sandbar just back of the present site of the city water and light plant ... I saw quite a number there myself."

According to the July 22, 1923, Austin Statesman, six men ("four negroes and two whites") were hanged at the courthouse from the 1890s (when it was first used for that purpose) until 1923, when electrocution was instituted at the state penitentiary in Huntsville. By 1923, the former gallows were used on hot nights as a privileged "sleeping porch" by five jail trustees, who by mutual agreement avoided the trap-door at the center of the room. The trustees told the reporter that the gallows provided "the coolest spot in the jail."

By 1921, courthouse regulars were complaining that despite periodic fumigation, the cupola, roof, and upper floors of the building had been infested seasonally with "thousands" of bats ("millions," claimed one dispatch), making the building "odorous and dirty." Jurors formally complained to Commissioners Court about the infestation, at least some were dodging jury duty because of it, and one official anonymously complained that the problem was driving them "batty." In 1922, officials were reporting that the bats had been joined by flying, biting "mites" in thick enough swarms to interrupt trials in progress, and at least one judge had taken to holding court in his relatively vermin-free office. He told the county that if sequestered jurors refused to sleep in the third floor room infested by mites, he would board them in a hotel and charge the county.

One official grudgingly insisted to the April 11, 1922, Austin Statesman, "The only thing I see is to build a new courthouse and give the one we got to the bats and mites. But maybe they will feel lonesome without us and follow us over to the new place."

It would be nearly another decade for that wish to be realized. Commis­sion­ers Court considered building a new courthouse on several sites – including rebuilding where they were, though that was complicated by the state lease and the Legislature's reluctance to act on the matter, and then finally its 1930 cancellation of the lease. By 1927, when a courthouse bond vote was scheduled, residents were referring to the 1876 building as a "fire trap and an eyesore," and a 1929 story featured yet another report of a trial-ending mite swarm, followed later by another bat attack.

Although the new courthouse project slowly proceeded over the next couple of years, there was still controversy over the site and cost, and as late as April of 1930, a group owning homes near Wooldridge Park protested to Commissioners Court that a courthouse on the 10th and Colorado site would encourage "loiterers," damage local businesses, and ruin their property values. County Judge George S. Matthews told the delegation objecting to the site that "we can't get any location without hurting somebody," and that in any event, in light of the extensive work and decisions already accomplished on the project, their objections had come "too late."

In the end, the new Travis County courthouse held its grand opening for citizens on Saturday, June 27, 1931 (as reported in the next day's Austin Ameri­can), with a flag-raising, a bugle call, and offices "bedecked with flowers" sent by well-wishers. A radio donated by dealer Newt Brunson was installed in the office of tax collector J.R. Williams, providing music "for the entire main floor." The building, originally designed for three courtrooms, would undergo expansions in 1958, 1962, and 1964, and now includes 19 courtrooms – for current needs of 24.

In October of 2005, the courthouse was renamed in honor of Heman Marion Sweatt, who in 1950, after a long struggle, had successfully defeated the whites-only policy of the University of Texas Law School. It would be 1964, following the passage of the federal Civil Rights Act, before all of UT-Austin would be officially desegregated.