Point Austin: Moths to a Flame 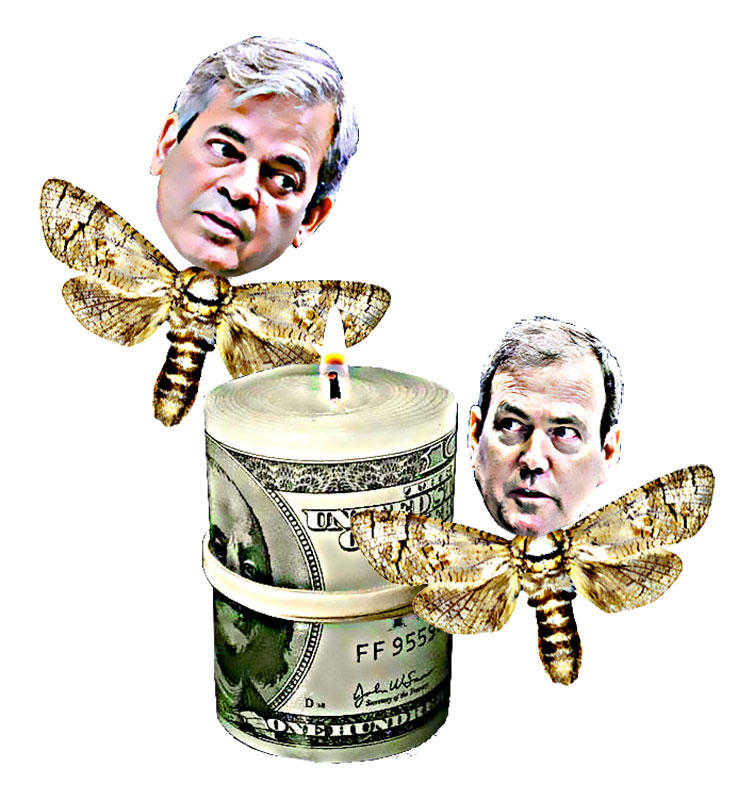 As of its noon recess Wednesday – beyond which a newsweekly's print deadlines dare not tread – City Council had not approached the halfway point, through its three-day "readings" and adoption vote of the FY 2016 city budget. The biggest decisions – how many new Austin Police officers to hire, and how much to pay-and-benefit non-public safety city employees – were yet to be discussed, far from being decided. The initial, tentative (Tuesday and Wednesday morning) decisions – the budget staff and mayor reported as Council members broke for lunch – had been marked up as leaving the General Fund (operating expenses) $1.3 million in the red – meaning if the overall budget is to meet its property tax target (2.16 cents lower than the current rate, meaning a $12 annual cut for the "median value homeowner"), the dais must find at least $1.3 million in cuts to offset its pending additions. That process resumed Wednesday afternoon, and presumably continues into Thursday, with a midnight deadline.

Council spent the first three hours of its initial budget adoption day (Tuesday, Sept. 8) engaging in what a Confucian scholar might call the Rectification of Numbers. With 10 council members and Mayor Steve Adler each having compiled working lists of proposed budget amendments – and adjustments to previously proposed amendments added on the fly – at least three versions of the "Budget Concept Menu" had been generated, and then bumped up against the budget staff's in-progress, omnibus attempt to calculate the potential effect of the various amendments. All of these lists were a little out of joint – and like carpenters adjusting a tacked-together house project, Adler, his colleagues, and the budget staff slowly trued up the numbers in order to establish an omnibus document that would be the template of the actual budget amendments.

The morning did not proceed entirely without decisions: Council moved unanimously to adopt City Manag­er Marc Ott's proposed budget – to get a working version on the floor for debate – and then adopted the handful of staff amendments, which essentially brought up-to-date the previously estimated numbers for the certified tax rolls, the consequent property tax rate, and the increased sales tax revenue (two months at 9% and 14%, above the projected 5%). The omnibus document didn't appear until nearly 2pm, as Deputy Chief Financial Officer Ed Van Eenoo and his staff worked to adapt their massive budget-tracking application to the specific needs of council members needing a working checklist. 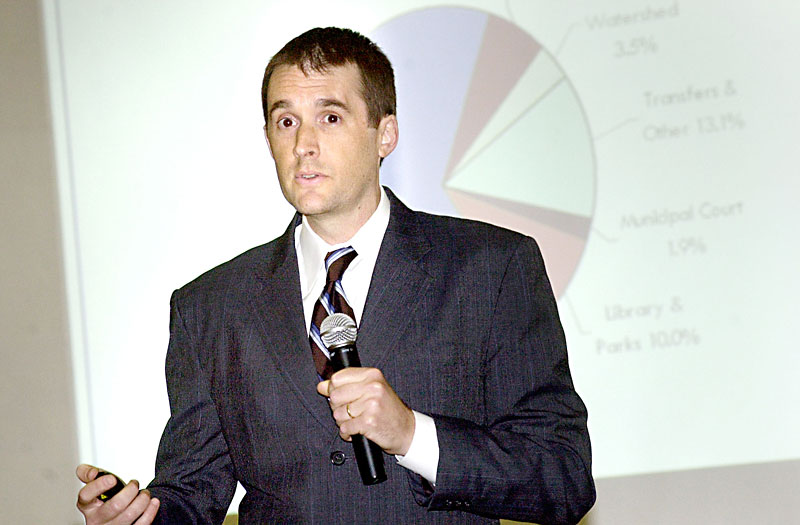 Those adjusted numbers were duly plugged into the working document, and as council members began to consider suggested increases, cuts, or shuffles, the budget staff did their best to keep up with the changing calculations. That process proceeded reasonably well, although occasionally confusing both the members on the dais and observers in the audience. The usually chatty local media Twitterverse slowed to a crawl, as reporters attempted in vain to keep up with the corrected numbers bouncing around the dais.

At one point, bogged down in line-item numerical adjustments, the mayor said the approach was like "a moth to a flame," getting closer and closer on each revolution. At least initially, nobody mentioned the final implications of that metaphor.

The morning motions had produced at least one instance of Council indirectly declaring itself on overall budgetary policy. Council Member Don Zimmerman moved that the overall budget increase – whatever it finally turned out to be – be held to the amount of inflation plus the population increase over FY 2015 – one of those self-restricting, inflexible, robotic caps beloved of the Legislature. He got a second from CM Ellen Troxclair, and third vote from Sheri Gallo – i.e., the three Republicans who had taken the Tea Party campaign pledge to hold property taxes to the "effective rate" (essentially flat spending). There were no other takers, the motion lost 8-3, and Council resumed the difficult business of actually making spending choices. (It's worth noting, however, that while the proposed budget represents a 6.2% increase over last year's, the inflation-plus-population growth would add 4.1% – another testimony to just how fast the city is growing.)

By the end of the day Tuesday – the members had agreed to recess by 6pm and clear out for the scheduled Planning Commission meeting – they had not gotten terribly far (and all their individual amendment decisions are subject to reversal pending ongoing computations of the total budgetary effects). Over objections from Zimmerman (who also abstained on several votes), they voted to add $600,000 for permanent supportive housing (an anti-homelessness effort), and $100,000 to initiate a long-discussed "sobriety center" (aka "drunk tank," where those arrested for uncomplicated public intoxication could sleep it off without getting booked). Zimmerman acknowledged the proponents' arguments that such spending "saves money" in (for example) social services and public safety, but said that unless staff could point to specific savings "realized" in the current budget, he opposed the spending. (On Wednes­day morning, Council backed off the permanent supportive housing funding, when staff reported that the housing plan isn't far enough along yet to actually accept additional funds.)

The budget as proposed also adds about $7 million in health and human services funding – certainly a potential bounty of good times, and an effort advocated by social service organizations and promoted on the dais by CM Delia Garza – but the Wed­nesday back and forth over related initiatives – especially "Quality of Life" programs – suggested all that funding might not survive into the final version, as other priorities nibbled away from various directions.

In somewhat surprising moments, Coun­cil came close to reducing a proposed increase for Capital IDEA (a job training and support program) and cutting funding to the city's now annual New Year's Eve family celebration. CMs Sabino Renteria and Ora Houston joined the conservatives in asking for Capital IDEA cuts – Renteria repeated his earlier argument that there are other groups that could use, and should compete for, the funds. The rest of the dais held firm, as they did on New Year's – even after Zimmerman insisted that neither he nor any of his district constituents had ever heard of the event.

There were a few other minor adjustments, but in another unexpected move, Mayor Adler brought up event fee waivers – specifically those for the SXSW Festival – and said he wanted to consider anticipating them ("baking them into") the budget directly, rather than waiting for requests from the Festival in the spring. Adler said the event is important for Austin music and musicians, music clubs, and the city's international brand, and that he considers it more efficient to make the policy statement within the budget.

There was no motion on the floor, so the matter remains up in the air – but "fee waivers" are so consistently a target of budget hawks that Troxclair in particular questioned jumping the gun on the waiver process. The matter was tabled, at least for the moment – and since SXSW normally requests the waivers specifically for its free concerts, canceling the waivers would most likely not result in more revenue for the city, just fewer free concerts.

Council was in the midst of "Quality of Life" discussions when the clock hit 6pm, so those items were left undecided, along with plenty more decisions before a Thursday midnight statutory deadline: financial policy, utilities, public safety, fees, parks, libraries, employee pay. ... All of those – especially public safety and employee pay – represent large sums and wiggle room.

Council chambers were nearly filled with various advocate-observers and even more departmental staff waiting patiently for Council questions that came only occasionally and randomly. Among the observers was Carol Guthrie, business manager of the AFSCME employees union, and I asked her for her sense of where things stand on employee pay and benefits. Although Council hadn't reached those subjects by mid-day Wed­nesday, they've been rhetorical footballs on the dais – although a majority indicated last week that they support the city manager's proposed 3% wage increase and related benefits increases. Guthrie said she hoped Council will adopt the recommendations, and "I think we have some very broad support, but I don't ever take anything for granted."

Guthrie recalled that this kind of uncertainty has historically only occurred in bad economic times – "We used to go through this back in the day, when there wasn't any money" – but it appears that several members "were only looking for money from city employees. ... 'There's a pot of money, let's cut it,'" being their line of thinking. She added that last week's letter to Ott and Council from 23 department heads reflected a widespread "level of frustration" from line staff that "their work is devalued, and the service they provide means nothing." By Thursday midnight, we should have a better idea if that frustration is justified.

Opening Wednesday's meeting, the mayor began by congratulating his colleagues on their budgetary commitment to health and human services, especially a commitment to "underserved communities" – services primarily targeted at those residents currently without sufficient access to health care and other services, especially in the African-American and Hispanic communities. The argument made sense – but it turned out also to be preamble to Adler saying he was unlikely to support additional "quality of life" initiatives (mostly proposed by Houston) that he considered either duplicative or else simply not affordable in the current budget.

Some of those Houston initiatives – notably $100,000 in new funding for cultural programs, initially earmarked for nonprofit radio stations KAZI and KOOP (on amendment by CM Leslie Pool) – happened over strenuous opposition from Zimmerman, who argued that these "ethnic programs" only divide the city, and encourage other ethnic groups to demand the same services – though the mayor pointed out that these programs are open to all Austinites, only targeting specific problems that affect some populations more than others. Zimmerman was unpersuaded – targeting these and indeed virtually any new spending as insupportable – but he found few allies on the dais. He was eventually reduced to blaming Detroit's bankruptcy on similar "diversity" spending programs – with nary a mention of the Great Recession and economic collapse of the auto industry. Other council members have essentially adopted the tactic of letting him have his say and moving on.

On the whole, it is still too soon to determine the overall direction of the FY 2016 budget, and what it might reflect of the specific priorities of the first 10-1 Council. Their pre-budget decision to begin installing a 20% homestead property tax exemption put them in a fiscal corner, but they have been happily bailed out, to a degree, by an extraordinary growth in real property and the historic opportunity to cut the average tax bill even as the budget grows. Some of that cost has been shifted to specific fee increases – another legislative pattern that shifts shared community responsibilities from citizens to narrower "users" or "consumers" – and that could be a trend at least some members will come to regret.

Will the moth successfully avoid the flame, or be immolated in the process? We'll know more next week – or with luck, by Thursday night/Friday morning.