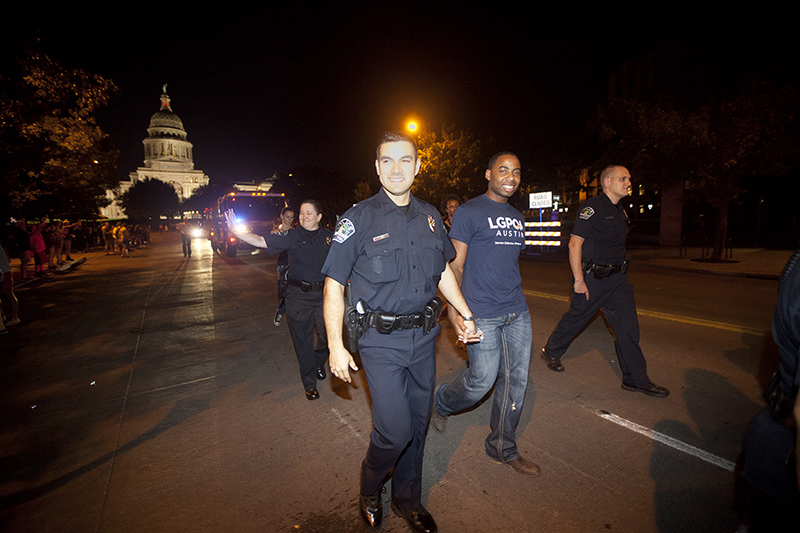 APD officers and members of the Lesbian and Gay Peace Officers Association-Austin march hand-in-hand during the Austin Pride parade on Aug. 29. LGPOA is "ecstatic" about the recent SCOTUS ruling on marriage equality because everyone can "finally enjoy the same rights and privileges afforded to our heterosexual brother and sister officers."

No regular meeting today (Sept. 3) for City Council, after a major budget work session Tuesday and continuing deliberations over a myriad potential budget amendments. Council anticipates actual budget adoption votes Sept. 8, 9, and 10, as necessary, and (if time allows) a regular (mostly zoning) meeting on the 10th.

City staff reacted to the simmering tension between City Council and city employees, in a sharply worded Aug. 31 memorandum from City Manager Marc Ott to Council transmitting a message from many department heads saying that staff feels "undervalued and unappreciated," and "under attack." See "Council Wrap-up."

Davis Down: Despite a last-ditch legal intervention, the UT-Austin statues of Confederate President Jefferson Davis and U.S. President Woodrow Wilson (another Son of the Confederacy) were removed from the Main Mall Sunday morning for relocation. The Sons of Confederate Veterans sued for an injunction, and lost in district court, the court of appeals, and the Texas Supreme Court.

Art Acevedo's staying put. News broke two weeks ago that the city's police chief was a finalist for the same job in San Antonio, however it appears he chose not to pursue the position any further. On Wednesday, City Manager Marc Ott announced that Acevedo wouldn't split. Instead, he'll get a 5% raise on his $206,086 salary, as well as a guaranteed severance package.

Gov. Greg Abbott has launched a targeted initiative against Planned Parenthood following the release of highly edited, misleading videos. His four-part "LIFE" plan calls for defunding the reproductive health care provider and the criminalization of altering abortion to preserve fetal tissue (already illegal). This comes amid civil and criminal investigations into the provider and an anti-choice-led witch hunt, er, Legislative hearing, chastising the provider despite the fact it has not even participated in (legal) fetal tissue research since 2010.

Horse racing in Texas nearly ended this week after a bizarre and convoluted political feud almost saw the demise of the Texas Racing Commission. A last-minute funding deal for the regulatory agency saved the estimated 1,000 in-state jobs created by the industry.

Will Rick Perry be the first presidential candidate to drop out? With the former Texas governor consistently polling around 1%, this week both his Iowa co-chairs, plus his New Hampshire political director, quit his campaign. Will the last staffer out kindly turn out the lights?