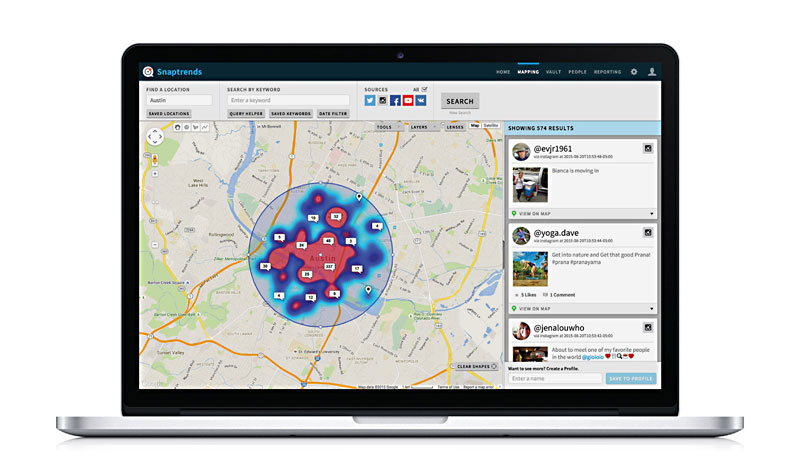 Snaptrends software can assign a geographical digital boundary which allows the user "to see conversation clusters and activity heat maps" within the defined area, according to Snap Trends' Matthew Hammer.

As the world increasingly becomes glued to social media, it comes as little surprise that law enforcement would join in. But what some Facebook users or Twitter followers may not be aware of is how local law enforcement is using software to monitor their posts and tweets.

Founded in 2012 as a private company and located just off Capital of Texas High­way, Snap Trends develops software that aggregates public information collected from social media. The company's website claims their software "builds a clear view of social conversations when and where they occur, the influencers driving them, and why." A Feb. 13 letter from Snap Trends Director of Sales Ken Ross to APD Sgt. Jeff Greenwalt, discovered in a Chron­icle open records request to APD and DPS, asserts that Snap Trends "developed its software intelligence system to serve public safety organization [sic] and national intelligence agencies in the United States."

Ross further explained the "system uses advance [sic] algorithms and processes to procure this high density social data footprint." Other documents reveal that both APD and DPS have current subscriptions to Snaptrends software, spending $6,370 and $24,200 respectively in the past year. APD Public Information Specialist Jenni­fer Herber informed the Chronicle that APD began using Snaptrends software on March 1, 2013. DPS began using it one month later, according to DPS Public Information Officer Tom Vinger. DPS currently has 13 employees licensed to use the software, while APD has 25 officers with access.

Emails obtained from APD demonstrate the Snaptrends software "makes it easy to share profiles, groups and persons-of-interests" and "can even integrate custom Facebook accounts." But its main feature is using geolocation to narrow a search using a "Poly Tool" which, according to a Snap Trends email, allows law enforcement "to gather pertinent information from social media platforms over specific areas without drawing in irrelevant content from unwanted areas .... This allows you to monitor precise locations such as parade routes, major highways or areas where protests are occurring." When asked if APD purchased the software for such events, Herber explained: "Real­-time analysis of open sources such as social media has been used to predict crimes and to help law enforcement respond more quickly as needed including, for example, stopping active shooters, tracking gang activity, and anticipating public protests that could escalate into violence." Additionally, she said the mission of the Austin Regional Intelligence Center (ARIC), where the software is used, "is to maximize the region's ability to detect, prevent, apprehend, and respond to criminal/terrorist activity."

Other documents show Snap Trends partnered with a private company called Esri, which develops mapping software called ArcGIS and has also been used by APD in the past. According to internal emails obtained via open records request, APD Senior Crime Analyst Tess Sherman used the Esri software to monitor Occupy Austin's first demonstration at City Hall in October 2011. Sherman pointed out the mapping function "would be neat-o to try. Although it may just end up as a bunch of dots downtown since a lot of it is real-time comments from the scene." Despite receiving tech support from the company, APD Police Planner Nora Evans replied to Sherman, "I don't know a lot about Twitter so maybe you can figure it out." But Snap Trends' emails indicate the company offered to provide tech support for its own software to at least 16 APD employees.

What were the police looking for? In one email, Snap Trends Account Manager Mark Klasson sent APD a document titled "Keywords." Assist­ant City Attorney Cary Grace has asked the Texas Attorney General's office to exempt that document and others from public disclosure. As of press time, the AG's office has not made a decision regarding the exemption.

Expanded surveillance remains a possibility, and a hack in July of the Italian surveillance software company Hacking Team gave hints of what could be on the horizon. The hack shed light on some of the darker sides of digital spying, including conversations between Hacking Team and Snap Trends that revolved around a potential partnership. Instead of monitoring public information, Hacking Team's Remote Control Sys­tem software infects remote computers and mobile phones, allowing control over them. Reporters Without Borders has called Hacking Team "digital mercenaries" and "corporate enemies of the Internet."

According to the hacked emails, available on the Wikileaks website, in March, Snap Trends CEO Eric Klasson met in Dubai for the "first exploratory meeting" with members of Hacking Team. Emails show the Dubai meeting was also attended by Snap Trends' partner Chenega, which resells Snap Trends' software internationally. After the meeting, Hacking Team's Philippe Vinci summarized: "The combination of each parties [sic] capabilities, Massive Social Media monitoring and Tactical Targets' Device interception, could bring a lot of value to customers and prospective customers of each party." Replying to that email, Klasson wrote, "I agree that a joint effort to sort this is something the market will respond to favorably (and quickly)."

The three companies kept up their contact through at least early June, including a meeting in Prague, but the emails lack specific details about the collaboration. Asked by the Chronicle to describe Snap Trends' relationship with Hacking Team, however, Snap­ Trends Marketing Director Matthew Ham­mer wrote via email that "Snap Trends knows of the Hacking Team, but has no relationship with them, and we don't plan on doing any business with them in the future." Open records requests did not yield documents indicating that APD or DPS have purchased Hacking Team's software; nor is there is any evidence that Snaptrends software currently operates as malware.

A LexisNexis 2014 "Social Media Use in Law Enforcement" report (available on the Snap Trends' website) which surveyed "federal, state and local law enforcement professionals" found that 81% "actively use social media as a tool in investigations," and 78% of current users plan "to use it even more in the coming year." Snap Trends' Hammer claims "hundreds" of U.S. law enforcement departments or agencies have bought their software. But raising questions about the effectiveness and accountability of this type of monitoring, the LexisNexis study also concluded that "52% of agencies still don't have a formal process for using social media for investigations."

Link to Open Records Request documents
A version of this article appeared in print on September 4, 2015 with the headline: The Social Network 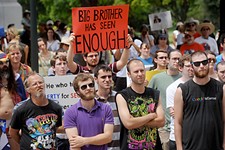