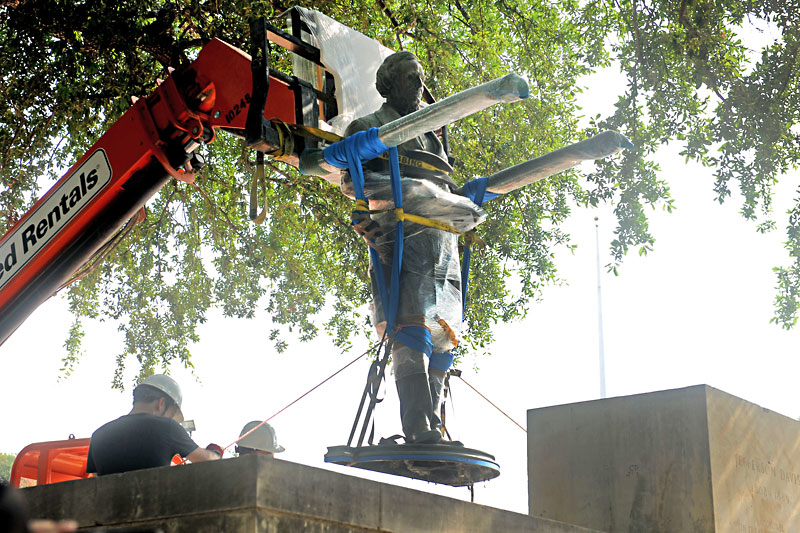 The statue of Jefferson Davis no longer stands over the University of Texas at Austin's South Mall. Over a couple of hours on the morning of Sunday, Aug. 30, a forklift removed the Confederate president's bronze likeness from its limestone pedestal, where it had stood since 1933 (see "Written in Stone," May 29).

In about 18 months, the Davis statue will be installed in UT's Briscoe Center for American History, which is currently being renovated. The Woodrow Wilson statue was also removed, to be relocated to a different outdoor location on campus, as yet undetermined. The University has not yet decided how it will deal with the inscriptions on the now-empty pedestals.

The other South Mall statues – Confeder­ate Generals Robert E. Lee and Albert Sidney Johnston, Confederate Postmaster General John Reagan, and first native Texan Governor James Hogg – will remain, because they "had deep ties to Texas," according to an Aug. 13 statement of UT President Gregory Fenves' decision. Notably, Fenves said he chose to move Wilson, not because of his racist beliefs, but "to preserve the symmetry of the Main Mall." (See "Going Somewhere?," Aug. 21.)

Between about 50 and 100 people – including students, alumni, university staff and faculty, and a small handful of Confederate sympathizers – gathered to watch – some clapping and cheering – as Davis was removed from his pedestal. Wilson was removed a couple of hours later, with far fewer onlookers. Both statues were loaded into a trailer, to be transported for refurbishing.

Dr. Gregory Vincent, UT's vice president for Diversity and Community Engage­ment, called the removal "iconic" and said that "it really shows the power of student leadership." Xavier Rotnofsky and Rohit Mandalapu, the student government president and vice president, were both on hand for the removal, which they had been pushing for since their March campaign (see "UT's Student Government Winners Mix Substance With Satire," March 27).

The Sons of Confederate Veterans, according to their lawyer Kirk Lyons, will continue to fight the "ISIS-style cleansing of history and tradition," as he put it. Lyons stayed for a while after Davis' removal, talking with media and debating students and bystanders, his voice growing hoarse. He repeatedly claimed that "Fenves will live to regret this day" and that he and other Confederate sympathizers intend to starve the university of funding.

For the record, the Southern Poverty Law Center describes Lyons as "a white supremacist." When asked by the Chronicle if that was true, Lyons didn't deny it, but instead claimed that the SPLC was the real "hate group."