On Sept. 1, the Attorney General's office will have 45 minutes before the Texas Supreme Court to undermine Judge John Dietz's 2014 ruling finding the current school finance system unconstitutional. Then intervenor groups, including the Texas Association of Business-backed Texans for Real Efficien­cy and Equity in Education, will get 10 minutes to make their case, followed by 10 minutes for the Texas Charter Schools Association. Finally come the original plaintiffs: the Texas Taxpayer and Student Fair­ness Coalition (representing 400 poorer school districts, and led by research and advocacy group the Equity Center); the Texas School Coalition (representing 60 wealthier districts); a further 81 districts headed by Fort Bend ISD; and the Mexican-American Legal Defense and Educational Fund. Their lawyers will get a grand total of 60 minutes to explain why Dietz was right. In all, that's barely over two hours. Equity Cen­ter director of public affairs Tedrah Rober­tson said, "They'll be done before lunch."

This massive challenge to the size and method of the state's investment in schools has been brewing since 2011, when lawmakers, acting on the basis of a dire revenue estimate from Comptroller Susan Combs, cut $4 billion out of the baseline school finance budget. With a failure to account for inflation, that left a $5.4 billion hole. Successive legislatures have put some cash back (see timeline) but Equity Center executive director Wayne Pierce said, "You're talking five or six years, and they're not even where they were then."

The lawsuit argues 1) that the state puts too little money into the system, and 2) that it is split up among school districts inequitably. Pierce's latest calculation is that the top 25% of schools receive $50,000 more per 22-student elementary classroom than the lowest-funded 25% – a number that does not take into account the fact that the poorest districts also often have the most complex and costly students to educate.

Pierce noted that Tuesday's hearing will deal with constitutional niceties about the state's responsibilities. However, he said, "Whether or not the system is inadequate and inequitable is a separate question to whether or not our school finance system should be improved." The fact the state has failed to reach even the 2011 numbers should be sign enough, and he is pessimistic that the Legislature will act without a Supreme Court ruling. Moreover, he voiced concern that this could be a repetition of the last time the courts tackled school funding: Back in 2006, the Supremes only ruled on part of a previous challenge. Rather than actually reform the system, Pierce said, lawmakers "just used that as an excuse to cut taxes."

A ruling could take months to be handed down. Pierce said the best result for the state's students would be a strongly worded decision against the state that forces them to act sooner rather than later, preferably in a special session. That would require Gov. Greg Abbott (who previously defended the state's position as attorney general) to call the Lege back. He has seemed resistant to calling for a special session during his first term as governor, but the court could force his hand. If that happens, Pierce expects the call would go out after the March primaries. He said, "That would give them room to have several [specials], and then they could implement changes in the 2016-17 school year."

1973: The U.S. Supreme Court finds (San Antonio ISD v. Rodriguez) that school finance should be ruled on by state courts, not federal.

1993: Lawmakers pass the "Robin Hood" system, capping the school property tax rate, and creating recapture, under which districts with higher property values send some of their taxes to the state.

2014: After then-Attorney General Greg Abbott fails to get him recused, Dietz rules that the system is still unconstitutional. State files an appeal with Texas Supreme Court. 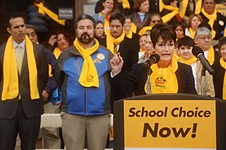 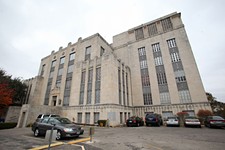