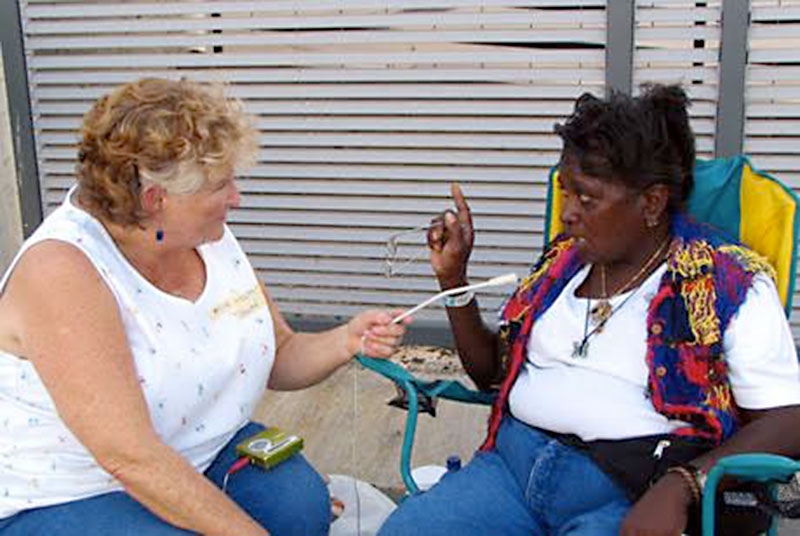 Katrina survivor Clarice B. recounts her story to an Alive in Truth volunteer.

Ten years ago this week, as poet and educator Abe Louise Young was graduating from the University of Texas' Michener Center for Writers, Hurricane Katrina ran roughshod over the Gulf Coast. A New Orleans native, Young could only watch with the rest of the country as her hometown devolved into chaos. Her family, whose home was flooded, traveled to Austin along with so many others when the doors to New Orleans were shuttered.

Young felt enraged by a mainstream media that she felt framed African-American survivors as looters and thugs. Channeling that rage, she began Alive in Truth: The New Orleans Disaster Oral History & Memory Project in order to record survivors' entire life stories, before Katrina and in the harsh moments after.

"My experience of the disaster was almost entirely through the stories that people were so generous as to share," Young said. "Like any New Orleans native, it's the recognition that the place you come from will never be the same."

Over the course of a year, about 40 people volunteered to interview, transcribe, and design the website. Out of her Eastside home or on the sidewalks surrounding the Convention Center, Young and her volunteers began taking these histories, and also connecting people to services that could help them get back on their feet.

"It wasn't just listening and recording," said Young. "One of the ethics of the project was that it was a reciprocal exchange, which is very different from what oral history projects usually are. ... With this project we were completely free to create what it was, so as people spoke and their needs were articulated, then the listener had an opportunity to say, 'May I help you with that? Would you like assistance?'"

Alive in Truth suffered a blow after a 2008 book of poetry called Saltwater Empire by Raymond McDaniel was published including a mixture of voices from the archive, rendered anonymous. Recommended the collection by the staff at BookPeople, Young said she nearly fainted when she read portions of the stories she had recorded and transcribed herself.

"People don't like having their stories without their names, and combined with other people's stories," Young said. "A lot of people came through Katrina with their memories and the clothes they were wearing. And not a lot else. And someone's tale of the meaning of what they've experienced is one of the most precious things we'll ever have.

"Basically, after that happened I just shut down around it completely," Young said. "The server company that was hosting the site went out of business, and I lost the domain name. And I thought it was all totally lost. I was just sort of stuck and feeling terrible about it for a while."

Until this year as the anniversary approached, when writer Rebecca Solnit and original volunteers and friends approached Young about restoring the archive. It was restored, and more stories are to be added soon.

"My hope is that anyone who survived Katrina keeps growing stronger, and more deeply connected to their community, and if the stories can serve as a place to reflect and remember, I would be happy with that. I also hope that people who were not able to encounter the real depth of the tragedy and the injustices that took place, through reading these stories, might understand better what happened, and what we need to do so it never happens that way again."

A.D.: New Orleans After the Deluge
This graphic novel depicts a time and a place where bravery borders on stupidity, obligation becomes an albatross, and thugs step up to the mantle as heroes 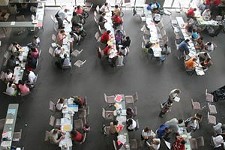 Second Wind
As the Katrina crisis subsides, the small victories and the larger questions persist