On Monday, Aug. 24, at City Hall, Mayor Steve Adler announced that the city of Austin would be filing suit against the Travis Central Appraisal District, commercial property owners, and Texas Comptroller Glenn Hegar, challenging the current property appraisal system as unconstitutional. Adler was joined by several local officials, among them TCAD Chief Appraiser Marya Crigler, and both officials emphasized that the lawsuit has been a "collaborative" enterprise, with both the city and the Appraisal District intent on achieving better information on property values for a more accurate and fair appraisal system.

The lawsuit had been anticipated since late June, when the city dropped its direct challenge to TCAD, in order to enable this year's certification of property values while the challenge proceeded separately (see "TCAD Challenge Suspended," June 26). While some taxing jurisdictions (e.g., AISD) supported the challenge, local governments rely on the certified tax roll to plan their budgets, and many feared any delay in certification would cause disruption. Under this joint strategy, TCAD was able to certify the values Monday, and shortly thereafter, the city formally filed suit.

Adler called the suit "a tool that can be used constructively in the pursuit of fairness." He also noted – echoed by Crigler, Mayor Pro Tem Kathie Tovo, Travis County Judge Sarah Eckhardt, and TCAD Board Chair Dick Lavine – that an eventual resolution might require legislative action, and reiterated several times that the aim of the challenge is "fairness and equity" in property taxation, as required by the state constitution. (Most City Council members also attended the announcement.)

"This challenge lawsuit," Adler said, "will allow us to fight for more tools to help the appraisal district do their job even better than current tools allow." He noted that Crig­ler has advocated at the Legislature to allow more accurate information into the appraisal process – specifically "full sales disclosure" reflecting actual market value – and that this lawsuit is a legal attempt to improve appraisal information.

The mayor also emphasized the "unprecedented" nature of the city of Austin's challenge, noting that other local governments had previously contemplated similar action but had eventually retreated. He said the extraordinary cooperation of the parties in this case has made the challenge possible, and that he hopes to pursue the goal of a fairer process both in court and in the next Legislature.

The city's research underlying the initial challenge ("Point Austin: The Appraisal Scam ... Updated," June 12) suggests that commercial appraisals have been greatly undervalued, in theory placing a greater burden on residential homeowners. But the mayor insisted that the challenge is not primarily an attempt to change appraisals on particular properties, or directly about residential affordability. "While the city must be focused on affordability," Adler said, "this lawsuit is not. Rather, this action is focused on fairness." He and Crigler said that some property owners have tried to use the city's research to challenge their specific appraisals. "Anyone doing this," said the mayor, "is misusing that report."

Crigler echoed the mayor's remarks of a "unified interest" among the parties, adding that TCAD's current appraisal process "meets and exceeds all statutory requirements," but that current law prohibits a more "fair and uniform" process. She said the District is seeking additional information – "full sales disclosure" – as a more accurate means of determining actual market value, and thus a more fair property tax system. Board Chair Lavine directly compared the challenge lawsuit to the ongoing school finance lawsuit (one of many), which is also about realizing constitutional mandates for "fair and equitable" treatment of all citizens. Funda­mentally, said Lavine, the challenge is to the Legislature (which has blocked full sales disclosure), and the need for a property tax system under which everyone will "pay their fair share." 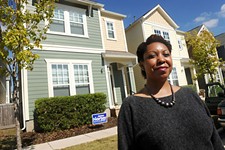